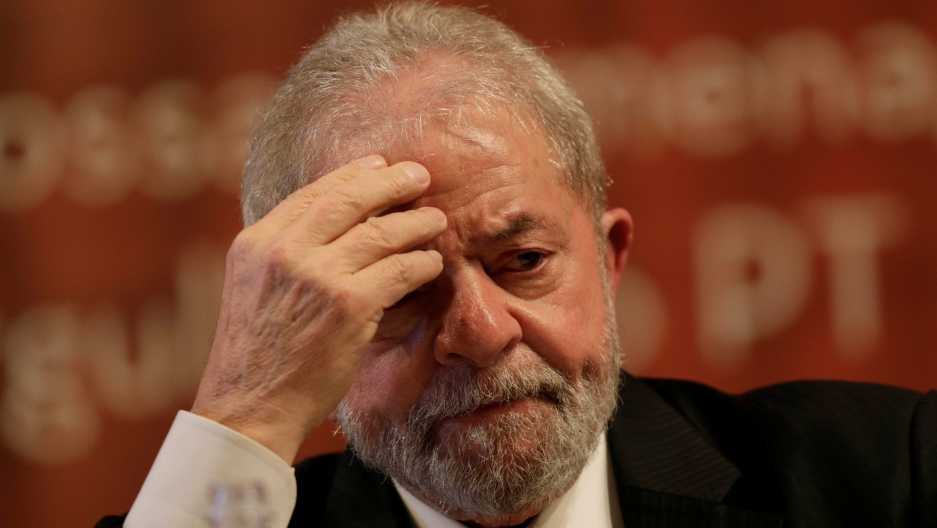 Brazil's former President Luiz Inácio Lula da Silva was sentenced to nearly 10 years in prison for graft in a stark fall from grace for the iconic leftist leader.

The leader known as Lula, who ruled Brazil from 2003-2010, was convicted and handed a 9 1/2-year prison term on Wednesday for accepting a luxury seaside apartment and $1.1 million, the latest twist in a giant corruption probe engulfing Latin America's largest economy.

But anti-corruption judge Sergio Moro said the 71-year-old Lula would remain free pending an appeal — something his lawyers immediately said they would lodge.

"We are appealing and will prove his innocence," the lawyers said in a statement sent to AFP.

The conviction nevertheless landed a heavy blow on the prospect of Lula making a political comeback in presidential elections due in October next year.

The verdict also sent a dramatic message to much of Brazil's political class that they, too, risked falling afoul of the anti-graft drive.

Even the current president, Michel Temer, has been charged with taking bribes and several of his ministers have resigned after corruption claims were made.

The sea change has come about because of Operation "Car Wash," a sweeping probe looking into a giant embezzlement and kickbacks scheme involving state-owned oil group Petrobras, construction firms and several political parties — Lula's Workers' Party chief among them.

But while many Brazilians welcome the long-overdue clean-up, the uncertainty is hobbling their country's struggle to exit from a historic recession.

The verdict against Lula "all but rules him out of the running for next year's presidential election," said Capital Economics, an economic analysis firm.

It said the court's decision was "likely to give a near-term boost to Brazilian markets" as the likelihood waned of Lula, a former union leader, returning to power and quashing needed economic reforms championed by Temer.

Lula has repeatedly denied taking any bribes during or after his presidency.

He has described the investigation against him as a campaign to prevent his return to power.

The Workers' Party called Lula's conviction and sentence "an attack on democracy" and Brazil's constitution, accusing the judge of bias.

Lula was "serene" upon receiving the news, though he felt "a natural indignation, like anyone convicted without proof," said one of his lawyers, Cristiano Zanin Martins.

Another lawyer, Valeska Zanin Martins, added: "They want to leave Lula out of the presidential race, and Lula leads the polls."

The conviction focused on allegations that Lulareceived the triplex apartment and cash as bribes from one of Brazil's biggest construction companies, OAS.

The judge ordered that the apartment be confiscated.

"Between the crimes of corruption and money laundering, there are sufficient grounds for sentences totaling nine years and six months of incarceration," Moro said in his verdict.

The sentence by Moro — whose wide popularity in Brazil for his anti-corruption work has prompted some to see him as a possible presidential candidate — fed into broader political ructions in Brazil.

Lula's successor, Dilma Rousseff, was impeached and booted from office last year, with Temer, her vice president, taking over.

Two weeks ago, Moro sentenced an influential minister in the Lula and Rousseff governments, Antonio Palocci, to 12 years in prison for corruption.

Palocci played a central role in the "Car Wash" scheme, most of which unfolded when Lula's Workers' Party was in power from 2003 to 2016.

Prosecutors said Palocci was a pointman in the flow of "bribes between the Odebrecht construction group and intermediaries of the Workers' Party," laundering more than $10 million used for party campaign finances.

Odebrecht, an industrial conglomerate with projects around the world, named Palocci "the Italian" in its list of code names for politicians regularly taking bribes in exchange for lucrative contracts with Petrobras and other favors.

The apartment bribe is one of five corruption cases stacked against Lula.

Others include allegations that Odebrecht gave $3.7 million to Lula so he could buy land to build the Lula Institution highlighting his political legacy, and that he received a kickback in Brazil's purchase of Swedish warplanes.

By AFP's Damian Wroclavksy in Brasília.