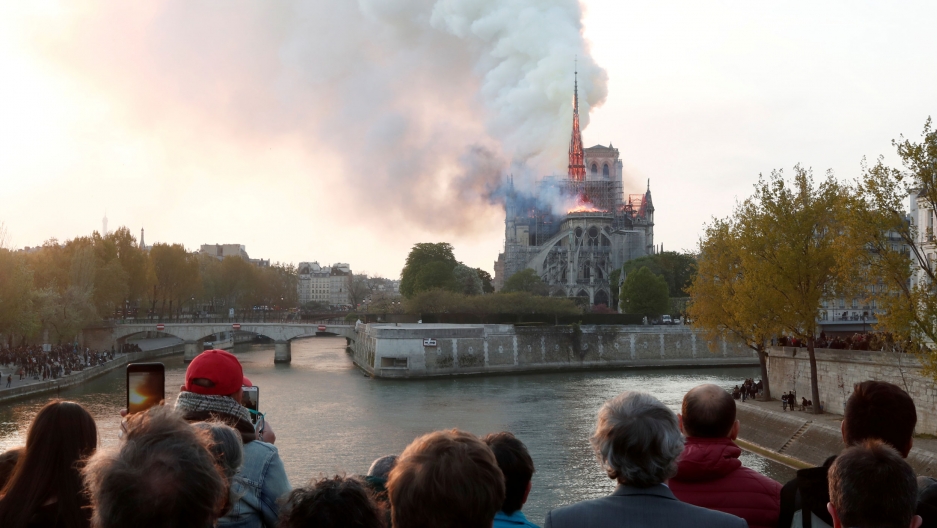 People watch from a bridge as smoke billows from Notre Dame Cathedral during a fire in Paris, France, on April 15, 2019.

A massive fire consumed Notre-Dame Cathedral on Monday, gutting and destroying the roof of the Paris landmark and stunning France and the world, but firefighters said they had saved the shell of the stone structure from collapse.

Flames that began in the early evening burst rapidly through the roof of the centuries-old cathedral and engulfed the spire, which toppled, quickly followed by the entire roof.

As it burned into the evening, firefighters battled to prevent one of the main bell towers from collapsing. One firefighter was seriously injured — the only reported casualty.

There was still a risk that some of the interior structures could collapse, and firefighters would work overnight to cool them down, he said.

Still can't believe my heart is with you #NotreDame pic.twitter.com/W0Gj5zZzqe

Distraught Parisians and stunned tourists gazed in disbelief as the inferno raged at the cathedral, which sits on the Ile de la Cite, an island in the River Seine and marks the very center of Paris.

Thousands of onlookers lined bridges over Seine and along its embankments, held at a distance by a police cordon.

World leaders expressed shock and sent condolences to the French people. President Emmanuel Macron said the whole nation was distressed. "Like all our compatriots, I am sad this evening to see this part of all of us burn," he tweeted.

A huge plume of smoke wafted across the city and ash fell over a large area. People watching gasped as the spire folded over onto itself and fell into the inferno. 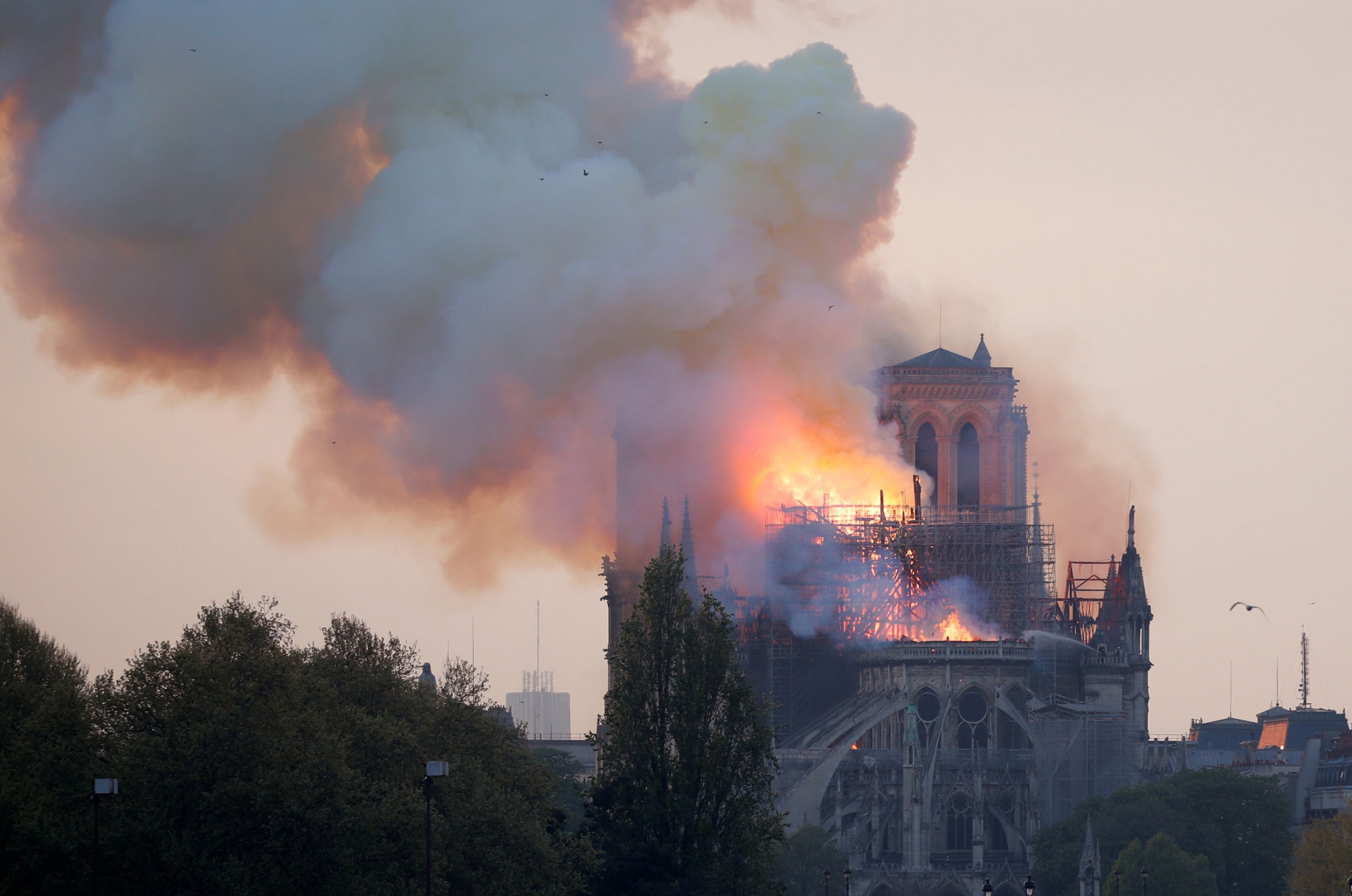 The spire fell from atop the cathedral.

A centuries-old crown of thorns made from reeds and gold and the tunic worn by Saint Louis, a 13th century king of France, were saved, Notre-Dame's top administrative cleric, Monsignor Patrick Chauvet said. But firefighters had struggled to take down some of the large paintings in time, he said.

The Paris prosecutor's office said it had launched an inquiry into the fire. Several police sources said that they were working on the assumption for now that it was accidental.

"Everything is collapsing," a police officer near the scene said as the cathedral continued to burn.

Macron, who canceled an address to the nation that he had been due to give on Monday evening, went to the scene of the blaze and talked to officials trying to contain it.

The French Civil Security service, possibly responding to U.S. President Donald Trump's suggestion that firefighters "act quickly" and employ flying water tankers, said that was not an option as it might destroy the entire building.

German Chancellor Angela Merkel called the cathedral a "symbol of France and our European culture". British Prime Minister Theresa May said her thoughts were with the French people and emergency services fighting the "terrible blaze".

The Vatican said the fire at the "symbol of Christianity in France and in the world" had caused shock and sadness and said it was praying for the firefighters. 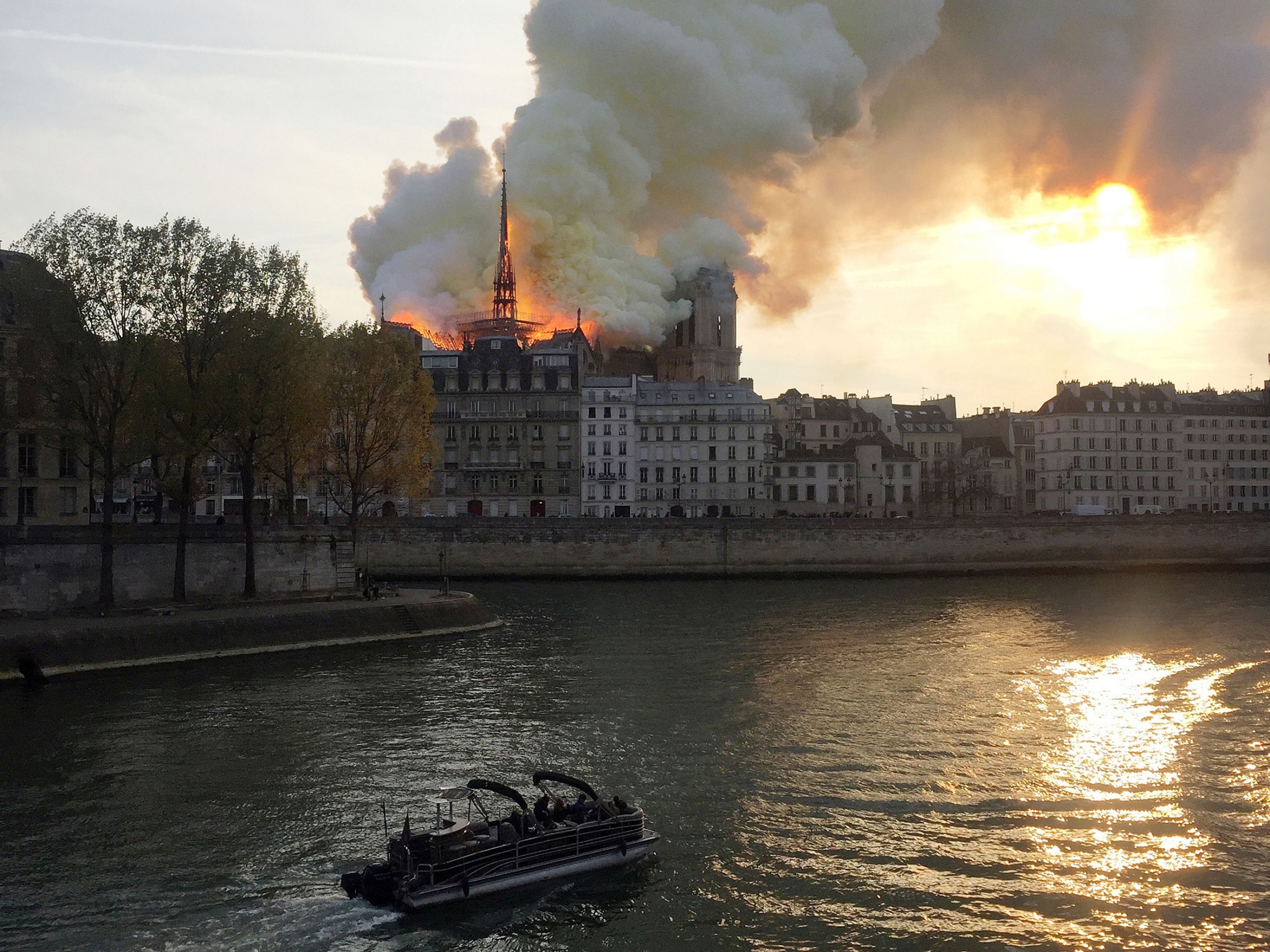 Smoke billows from the Notre-Dame Cathedral, filling the sky over Paris.

The mayor of Paris, Anne Hidalgo, said at the scene that some of many artworks that were in the cathedral had been taken out and were being put in safe storage.

The cathedral, which dates back to the 12th century, features in Victor Hugo's classic novel "The Hunchback of Notre-Dame." It is a UNESCO World Heritage site that attracts millions of tourists every year.

It is a focal point for French Roman Catholics who like Christians around the world are celebrating Holy Week, marking the death and resurrection of Jesus.

The archbishop of Paris called on all priests in Paris to ring church bells as a gesture of solidarity for Notre-Dame.

"I have a lot of friends who live abroad and every time they come I tell them to go to Notre-Dame," said witness Samantha Silva, with tears in her eyes.

"I've visited it so many times, but it will never be the same. It's a real symbol of Paris."

The cathedral was in the midst of renovations, with some sections under scaffolding, and bronze statues were removed last week for works.

Built over a century starting in 1163, Notre-Dame is considered to be among the finest examples of French Gothic cathedral architecture.

It is renowned for its rib vaulting, flying buttresses and stunning stained glass windows, as well as its many carved stone gargoyles.

Its 330-foot roof, of which a large section was consumed in the first hour of the blaze, was one of the oldest such structures in Paris, according to the cathedral's website.

A center of Roman Catholic faith, over the centuries Notre-Dame has also been a target of political upheaval.

It was ransacked by rioting Protestant Huguenots in the 16th century, pillaged again during the French Revolution of the 1790s and left in a state of semi-neglect. Hugo's 1831 work led to revived interest in the cathedral and a major — partly botched — restoration that began in 1844.

The wood-and-lead spire was built during that restoration, according to the cathedral's website.

"Notre-Dame belonged to all humanity. What a tragic spectacle," tweeted Jean-Claude Juncker, president of the European Union's executive Commission.