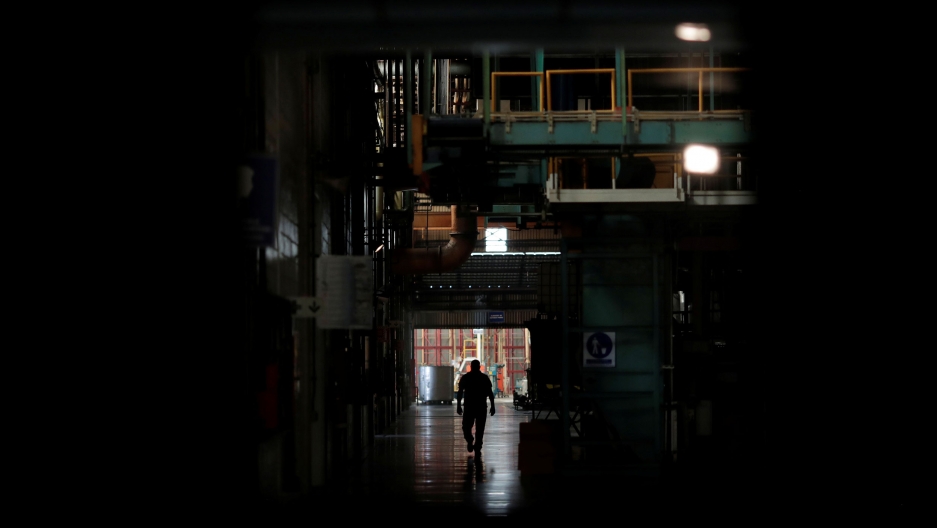 A worker walks next to halted machines at a cans' factory during a power cut in Valencia, Venezuela, April 8, 2019.

The latest power outage started another tough week for factory owner Antonello Lorusso in the city of Valencia, once Venezuela's industrial powerhouse.

For the past month, unprecedented nationwide blackouts paralyzed the factory and the rest of the country, cutting off power, water and cell service to millions of Venezuelans.

Lorusso's packaging plant, Distribuidora Marina, had already struggled through years of hyperinflation, vanishing client orders and a flight of employees. Now the situation was worse.

For the whole month of March, Lorusso said, his company produced only its single daily capacity: 100 tons of packaged sugar and grains. When Reuters visited on April 8, he was using a generator to keep one of his dozen packaging machines working to fulfill the single order he had received. Power had been on for a few hours, but was too weak to run the machines. 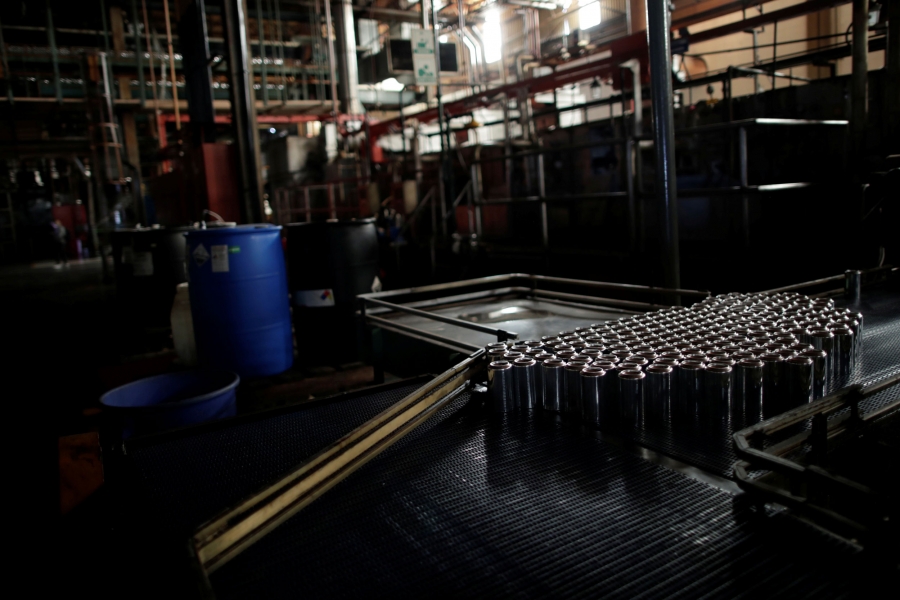 Cans are seen on a halted machine at a factory during a power cut in Valencia, Venezuela.

"There is no information, we don't know if the blackouts will continue or not," said Lorusso, who has owned the factory for over 30 years. He said the plant had just a day's worth of power over the previous week.

Power has been intermittent since early March, when the first major blackout plunged Venezuela into a week of darkness. Electricity experts and the opposition have called the government incompetent at maintaining the national grid. President Nicolas Maduro has accused the opposition and the U.S. government of sabotage.

Venezuela's industry has collapsed during six years of recession that have halved the size of the economy. What is left is largely outside of the capital Caracas, the only big city that Maduro's government has excluded from a power rationing plan intended to restrict the load on the system. 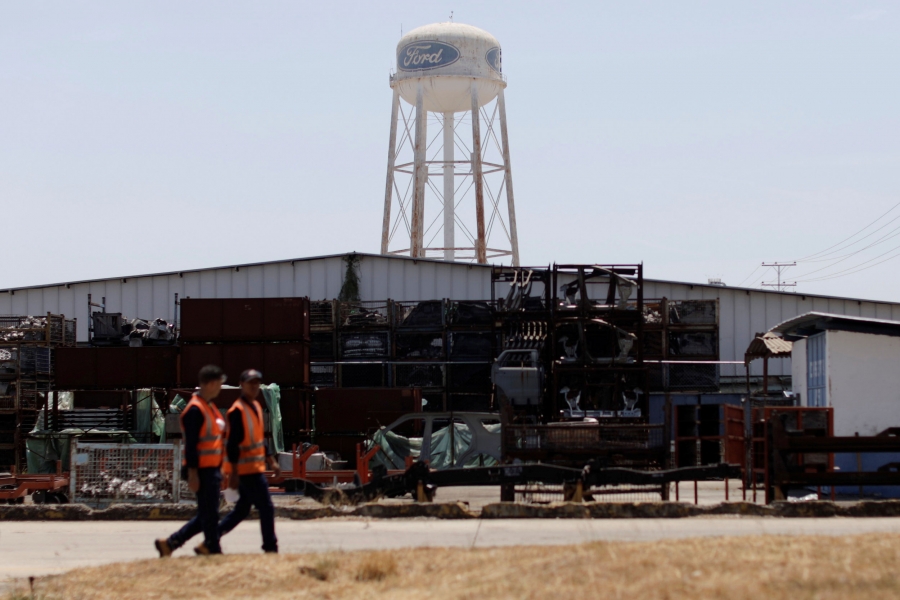 Men walk at a Ford plant in Valencia, Venezuela.

In Valencia, a few multinational companies like Nestle and Ford Motor Co. cling on. But the number of companies based there has fallen to a tenth of the 5,000 there were two decades ago, when Maduro's predecessor Hugo Chavez became president, according to the regional business association.

'The game is over'

The government said on April 4 that the power rationing plan meant Valencia would spend at most 3 hours a day without electricity, but a dozen executives and workers there said outages were still lasting over 10 hours. Generators are costly and can only power a fraction of a business's operations, they said. Many factories have shut down.

"The game is over. Companies are entering a state of despair due to their inviability," said an executive of a food company with factories in Valencia, speaking on condition of anonymity.

Industrial companies this year are operating below 25 percent of capacity, according to industry group Conindustria. It estimated companies lost about $220 million during the days in March without power, and would lose $100 million more in April. 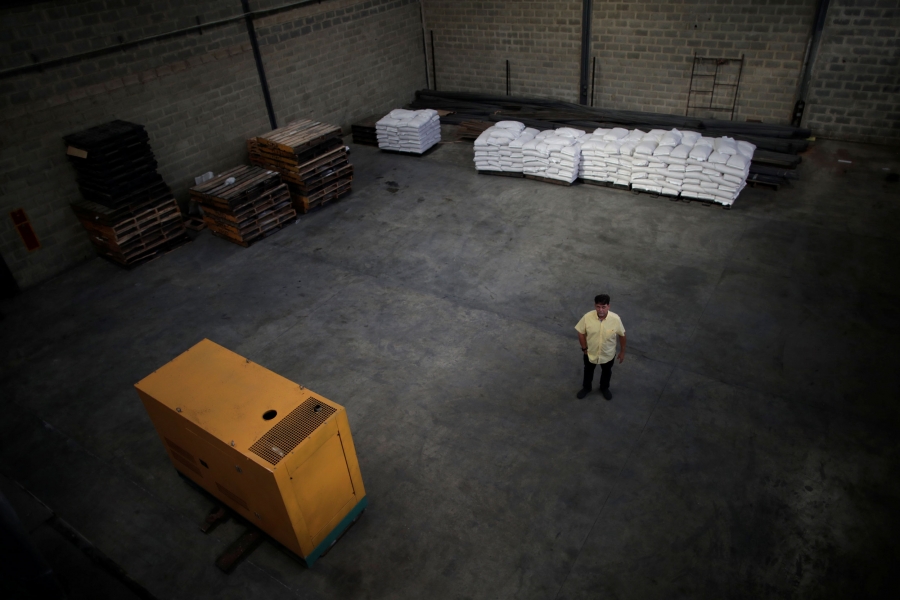 Businessman Antonello Lorusso stands next to a generator at the warehouse of his food packaging plant in Valencia, Venezuela.

Nestle's factory, which produces baby food, halted during the first blackout in early March and operations again froze two weeks later, with employees sent home until May, according to Rafael Garcia, a union leader at the plant. He blamed the most recent stoppage on very low sales of baby food which cost almost a dollar per package, or about what a person on minimum wage earns in a week.

"My greatest worry is the closure of the factory," said Garcia, as he sat at a bus stop on Valencia's Henry Ford avenue, in the city's industrial outskirts where warehouses sit empty and streets are covered in weeds.

Ford's plant along the avenue was working at a bare minimum for several months, union leaders said. In December, the carmaker began offering buyouts to staff after it received no orders for 2019, they said. Ford, in December, said it had "no plans to leave the country." 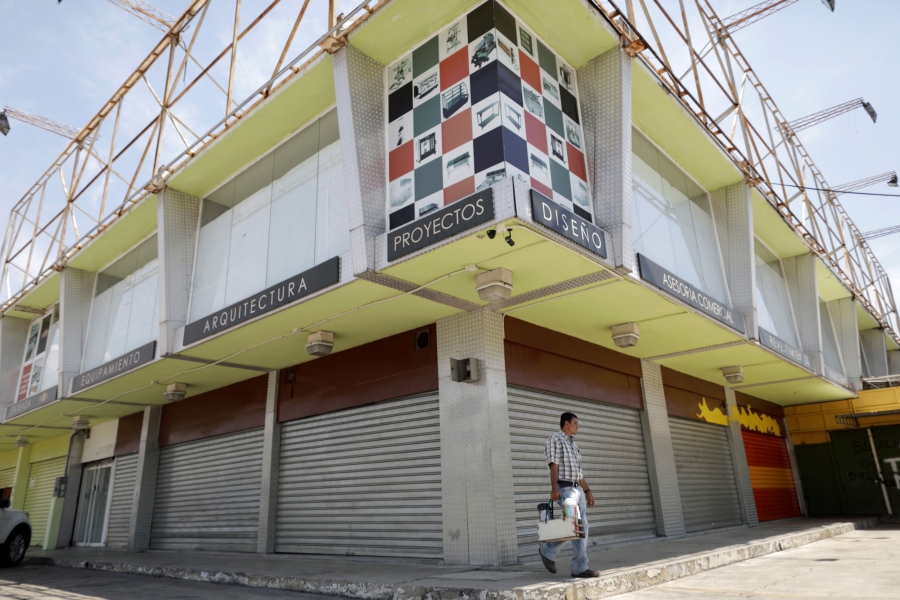 The outages have idled more than just factories. In the countryside, lack of power has prevented farmers from pumping water to irrigate fields.

Since January, farmers have sown 17,500 hectares of crops, a third of the area seeded last year, and they fear losing the harvest due to the lack of water, according to agricultural associations. In the central state of Cojedes, several rice growers have already lost their crops, farmers said.

Producers of cheese, beef, cured meats and lettuce told Reuters orders had dropped by half in March as buyers worried the food would perish once their freezers lost power in the next blackout.

Back in Valencia, Lorusso was preparing his factory for the new era of scarce power. He has converted one unused truck in his parking lot into a water tank. He plans to sell another to buy a second generator.

"We've spent years getting used to things. Then we were dealt this hard blow, and now we're trying to find ways to cope," he said.

By Corina Pons and Mayela Armas/Reuters