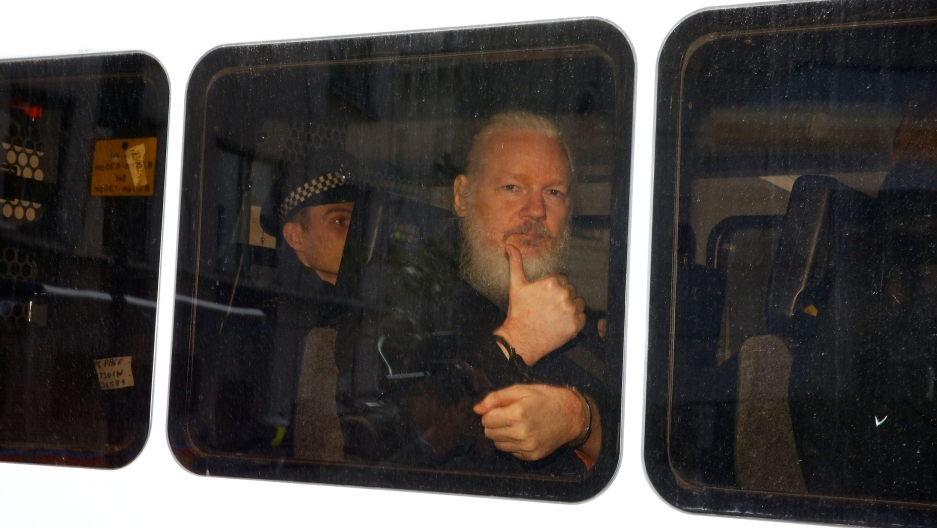 WikiLeaks founder Julian Assange is seen in a police van after was arrested by British police outside the Ecuadorian embassy in London, Britain, April 11, 2019.

Following an abrupt withdrawal of his seven-year asylum by Ecuador, British authories arrested WikiLeaks founder Julian Assange and carried him out of the Ecuadorean embassy on Thursday. The arrest paves the way for his possible extradition to the United States.

An agitated, frail-looking Assange with white hair and a white beard was carried out of the embassy by at least seven men to a waiting police van.

"Julian Assange, 47, has today, Thursday 11 April, been arrested by officers from the Metropolitan Police Service (MPS) at the Embassy of Ecuador," British police said.

Police said they arrested Assange after being invited into the embassy following the Ecuadorean government's withdrawal of asylum. Police later added that Assange had been arrested a second time after an extradition request from the United States.

The arrests, after nearly seven years holed up in a few cramped rooms at the embassy, mark one of the most peculiar turns in a tumultuous life that has transformed the Australian programmer into a rebel wanted by the United States.

Assange's supporters said Ecuador had betrayed him at the behest of Washington, that the termination of his asylum was illegal and that they feared he would ultimately end up on trial in the United States.

To some, Assange is a hero for exposing what supporters cast as abuse of power by modern states and for championing free speech. But to others, he is a dangerous rebel who has undermined US security.

WikiLeaks angered Washington by publishing hundreds of thousands of secret US diplomatic cables that laid bare often highly critical US appraisals of world leaders, from Russian President Vladimir Putin to members of the Saudi royal family.

Assange made international headlines in early 2010 when WikiLeaks published a classified US military video showing a 2007 attack by Apache helicopters in Baghdad that killed a dozen people, including two Reuters news staff.

It was not immediately clear what specifically prompted Ecuador to end Assange's stay in the embassy, or the extent of the diplomacy that led to the arrest. The Kremlin said it hoped his rights would not be violated.

Assange in June 2012 took refuge in Ecuador's London embassy, behind the luxury department store Harrods, to avoid being extradited to Sweden, where authorities wanted to question him as part of a sexual assault investigation.

Sweden dropped that investigation in 2017, but Assange was arrested on Thursday for breaking the rules of his original bail in London.

Friends of Assange said the solitude he had experienced in the embassy had hurt him most.

"It was a miserable existence and I could see it was a strain on him, but a strain he managed rather well," said Vaughan Smith, a friend who visited Assange. "The thing that was most difficult for Julian was the solitude."

"He was very tough, but the last year in particular was very difficult. He was constantly being surveilled and spied upon. There was no privacy for him."

Assange's relationship with his hosts collapsed after Ecuador accused him of leaking information about President Lenin Moreno's personal life.

Moreno said Assange's diplomatic asylum status had been canceled for repeated violation of conventions. He said he had asked Britain to guarantee that Assange would not be extradited to any country where he might face torture or the death penalty.

"The British government has confirmed it in writing," Moreno said. "The asylum of Mr Assange is unsustainable and no longer viable."

The United States has always been reticent about the legal case against Assange, and there were no immediate details on what charges the US extradition request related to.

Due to a clerical error, a document filed by federal prosecutors in Virginia in an unrelated 2018 investigation revealed that Assange had secretly been indicted by US authorities.

Prosecutors have acknowledged the authenticity of the document but have refused to confirm or deny that Assange has been criminally charged under US federal law.

The US Department of State said it was aware of reports of Assange's arrest but deferred questions on his extradition to the Department of Justice, which did not respond to queries.

Britain said no man was above the law.

"Julian Assange is no hero, he has hidden from the truth for years and years," British Foreign Secretary Jeremy Hunt said.

A Swedish lawyer representing the alleged rape victim said she would push to have prosecutors reopen the investigation.

But Sven-Erik Alhem, a retired senior prosecutor and chairman of NGO Victim Support Sweden, said he thought that may be difficult.

"I'd think it would be fairly uphill to reopen the investigation, mainly because testimonies usually weaken with time and it's now been 10 years. On top of that, the statute of limitation is drawing near," he said.

Assange was taken into custody and later pictured in the back of a van leaving a London police station in handcuffs with his thumb up. He is due to be brought before Westminster Magistrates' Court.

By Kate Holton and Guy Faulconbridge/Reuters