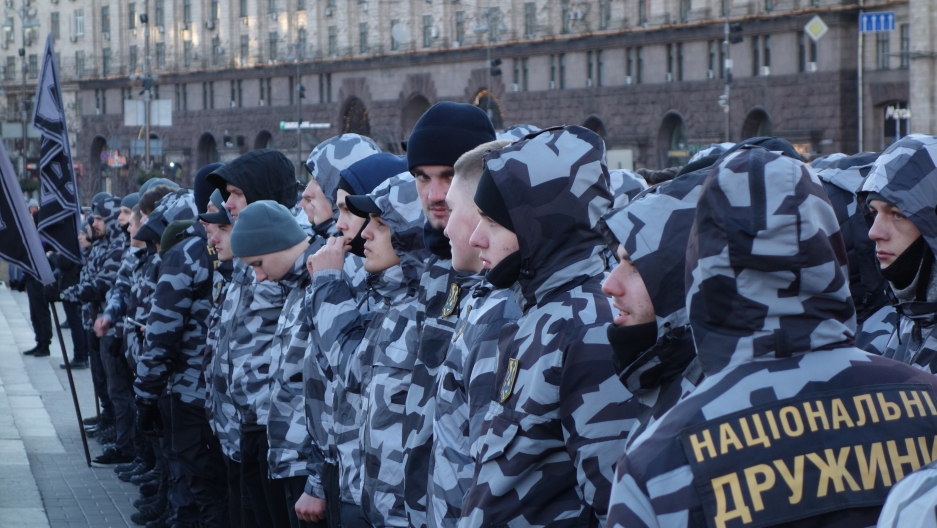 Editor’s note: This story was produced ahead of the first round of voting in Ukraine on March 31, 2019, in which Volodymyr Zelensky obtained 30% of the vote and incumbent Petro Poroshenko came in a distant second with 16%.

About two dozen young men sit in a seminar taking notes while watching a PowerPoint presentation with excerpts from the Ukrainian constitution.

Maxim Zabara, the instructor, explains the intricacies of Ukraine’s electoral law and offers advice: Report to your polling station early. Bring a pen. Bring water. Have everything you need on you.

At first glance, this could pass as a regular seminar for any election observer gearing up for Ukraine’s presidential elections on March 31, 2019. But these would-be observers often refuse to talk to journalists. Clad in military fatigues, with black and grey vests, this group sports the name of Ukraine’s far-right Natsionalny Druzhini, or "National Militia."

The militia is part of Azov, the country’s most visible ultranationalist group, who also started their own political party — the National Corps. While the National Corps party hasn’t fielded their own candidate in this election, the group will nevertheless show up at the country’s polling stations. The Central Electoral Commission has granted the National Militia the right to act as electoral observers and reported that they will deploy a total of 342 observers across 34 electoral districts.

“We can’t trust the state, so people need to defend their rights themselves."

Zabara says election and voter fraud concerns are the reason Azov’s work is necessary: “We can’t trust the state, so people need to defend their rights themselves,” Zabara said after the seminar at Cossack House, where the National Militia training took place — steps away from Kyiv’s Independence Square. 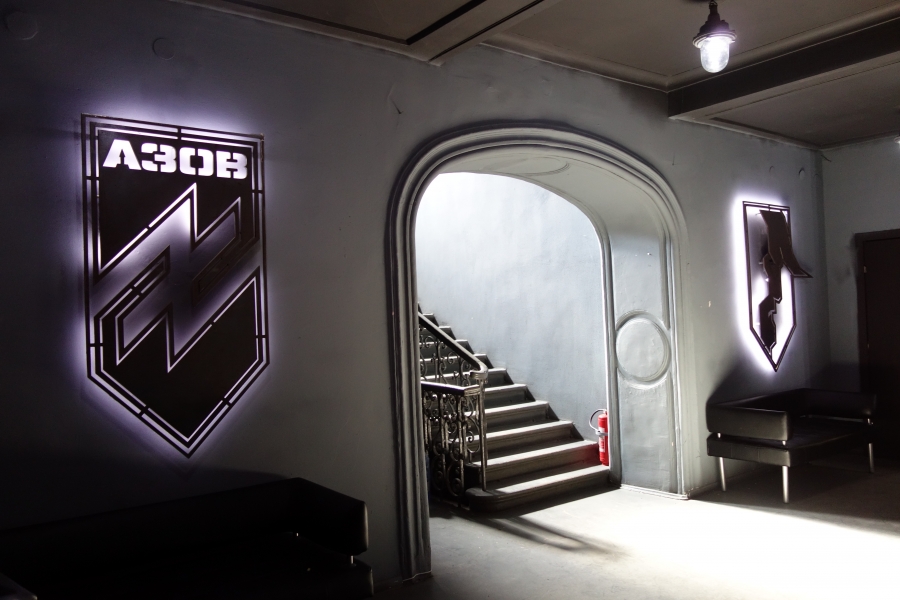 The emblem of the Azov movement is seen in the entrance hall of the Cossack house, where National Militia members held their election observer training.

In the run-up to an unpredictable election after a campaign season marred with corruption scandals and accusations of mass vote-buying from all sides, the involvement of Azov — a violent, ultranationalist organization — is potentially destabilizing.

“By serving as election observers (…) these groups could be attempting to normalize both their ideology and their use of violence,” according to a Freedom House report.

“Azov has become a tool, an instrument of political technology in the campaign."

Polls currently see comedian Volodymyr Zelenskiy and incumbent President Petro Poroshenko as the most likely to reach the second round. But recent brawls between the National Militia and Poroshenko fans have raised suspicions that Poroshenko's opponents have activated the group to disrupt his campaign.

Azov’s presence in the elections has raised concerns that the group could be used to intimidate voters. “Azov has become a tool, an instrument of political technology in the campaign,” says Vyacheslav Likhachev, a Kyiv-based researcher of right-wing extremism with the National Minorities Rights Monitoring Group.

On March 9, members of the National Militia and the National Corps clashed with the police in the central Ukrainian city of Cherkassy in an attempt to disrupt a Poroshenko campaign rally. The confrontation left 22 police officers injured, with similar clashes on the same day in Kyiv. Since then, members of Azov have tried to disrupt at least two other Poroshenko rallies and have held weekly protests in the capital following a defense corruption scandal they claim Poroshenko covered up.

Azov formed as a voluntary military unit in response to Russian incursion on Ukrainian territory in 2014. Its involvement in Ukraine’s bloodiest battles against Russia-backed separatists in Eastern Ukraine earned Azov significant prestige among Ukrainians, but the group has also been accused of possible war crimes by the Office of the United Nations High Commissioner for Human Rights.

From the start, Azov has used the Wolfsangel, a Nazi symbol, as its logo, highlighting its extremist ideology. The US State Department described Azov as a “nationalist hate group” in a recent report.

Azov’s focus on Poroshenko — and not on any other candidate — has reignited speculation that Azov enjoys protection from Ukrainian interior minister Arsen Avakov, who recently emerged as a Poroshenko rival.

In August 2014, Avakov appointed Andrey Biletsky — Azov’s founder and main figure — a lieutenant colonel of the National Guard, and later appointed another top Azov officer as head of the Kyiv police. While Avakov has admitted to being in contact with Biletsky, he denies having any specific influence over Azov. Azov representatives also deny the relationship.

“Biletsky [Azov leader] used to be Avakov’s protégé. ... Today Azov is a bit of a separate project, but it still supports Avakov in different ways.”

“Biletsky [Azov leader] used to be Avakov’s protégé,” said Anna Hrytsenko, a sociologist working on Ukrainian far-right movements. “Today Azov is a bit of a separate project, but it still supports Avakov in different ways.”

Avakov himself is not a candidate in the election and has never hinted at presidential ambitions. But his position as interior minister, in control of the national police and national guard, makes him one of Ukraine’s most powerful men, and his ties to Azov may be Avakov’s way to hold onto power after the election.

“I think it is a mutually beneficial cooperation between Avakov and Biletsky,” Volodymyr Ishchenko, a researcher and specialist of the Ukrainian far-right and deputy director of the Center for Social and Labor Research. 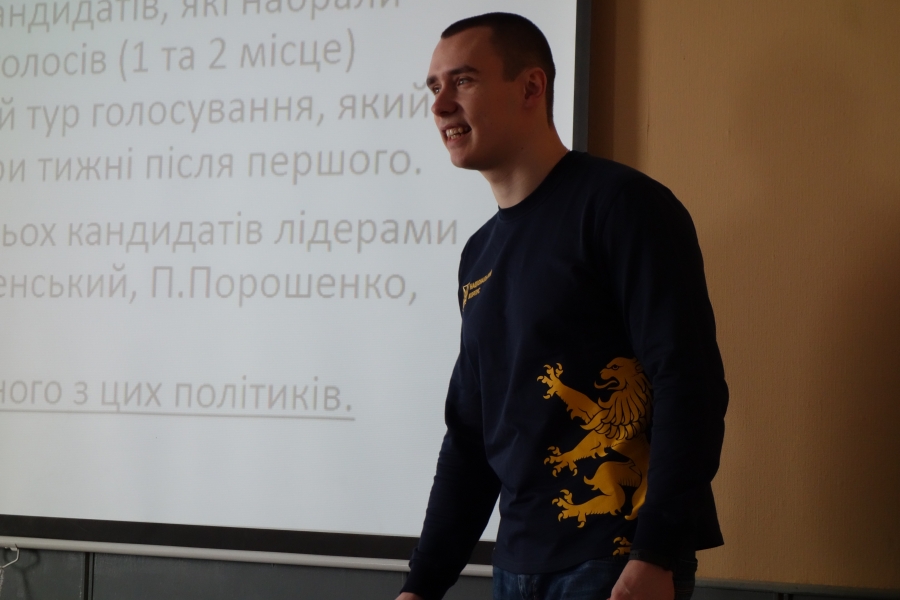 Azov’s actions have raised concerns among Western nations of potential election violence. On March 15, G7 ambassadors sent a letter calling on Interior Minister Avakov to “be clear with those groups that they must act within the law and desist from intimidation of candidates and law enforcement bodies,” according to an RFE/RL report.

“There is a risk that Poroshenko’s opponents, including Azov, could call for protests during the election."

“There is a risk that Poroshenko’s opponents, including Azov, could call for protests during the election,” Kyiv-based political analyst Volodymyr Fesenko said. The risk would be especially high if Poroshenko was to win by a small margin, he argues, as it would make accusations of voter fraud more viable.

Azov’s National Militia, which launched officially in January 2018, is particularly problematic. It has been involved in attacks against Roma minorities and LGBT groups, and, in multiple cases, disrupted city council sessions across Ukraine to pressure local authorities to pass or block decisions. Azov has become the most visible far-right group with growing influence.

“Order is needed in other spheres, too,” said Igor Mikhailenko, Azov’s official leader. Mikhailenko claims the group’s new election monitoring role is simply a logical extension of its stated mission to “bring order to Ukrainian streets.” 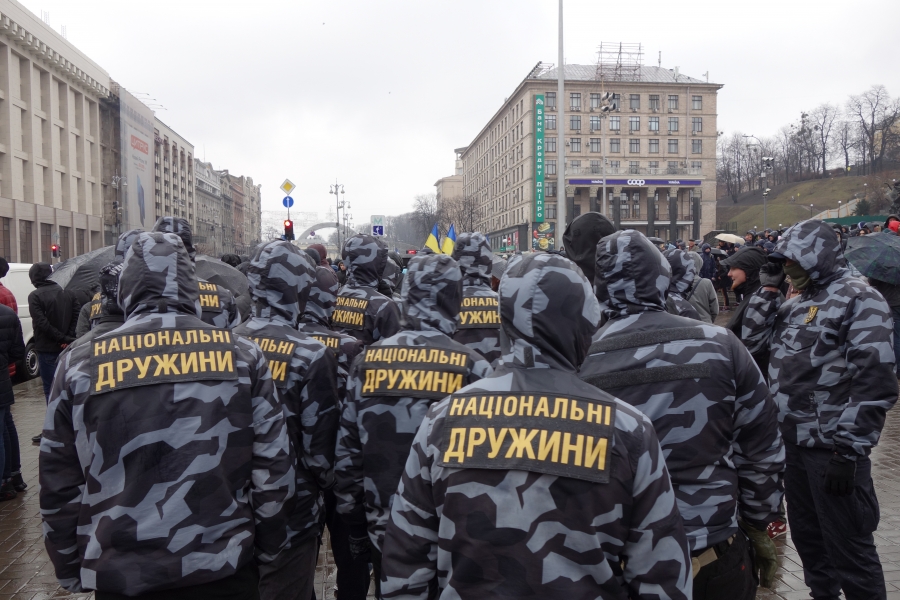 Members of the Azov's National Militia and National Corps protest in Kyiv, Ukraine, on March 16, 2019.

In early March, the Central Electoral Commission called on Ukraine’s security service to investigate the National Militia but later admitted it could not rescind its registration as electoral observers because there was no such procedure.

Azov’s involvement in the campaign benefits the group by increasing its visibility. The group’s attempts to engage in electoral politics have been unsuccessful so far — in September 2018, an early poll gauging potential presidential candidates gave National Corps’ Andrey Biletsky a zero percent rating.

But as Azov sets its eyes on October's parliamentary elections, their presence at the polls and on the streets continues to increase their influence on Ukraine society.