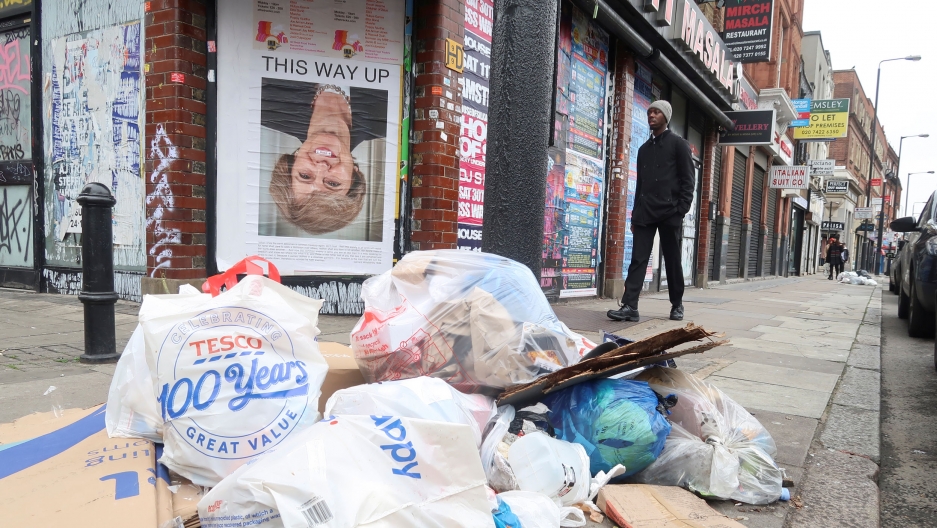 Waste is placed outside a corner shop with a poster of British Prime Minister Theresa May in downtown London, UK, on March 20, 2019. Theresa May is a example of the "glass cliff" phenomenon: Women often come to power during crisis, when the chance of failure is high.

It's called the "glass cliff." It's the phenomenon of women in leadership roles — CEOs or political figures — who are far more likely to ascend to leadership roles during a crisis, when the risk of failure is highest.

The world needs only to look to Britain to see the glass cliff in effect: From the moment Theresa May became Britain's prime minister two years ago, her attention has been mostly focused on making Brexit a reality. May didn't cause the crisis — in fact she was against the UK divorce from the European Union — but she's been expected to fix it.

"... A traditional white male leader might say, 'Why on earth would I want to be a leader in this situation? It's set up for failure. I'm starting at a deficit. I don't want this, I'll have another opportunity,'" explains Alison Cook, a researcher at Utah State University. "Whereas a white woman or a person of color might say, 'This might be my only shot at having this leadership role.' That's one reason."

Another reason this happens?

"The other is a stereotypical view of women and there's actually been research done that says that people perceive women to be better in a crisis situation," Cook says. "Now, it might be because they're more empathetic, it might be that they're perceived to be more consensus building, more loyal, maybe have a more participative leadership style. "

Related: Britain's May faces defeat in parliament over Brexit plan

This is not specific to Theresa May or politics — women are more often given the chance to lead in times of crisis. Cook, who studies this trend at Utah State University, spoke to The World's Marco Werman about May and the glass cliff.

Marco Werman: In a crisis, are women held to the same expectations as men?

Women are under far more scrutiny when they are in these leadership roles than men. Just because there are so few women, it's such a rare occurrence to have a woman leading a country, a company, in this situation that they're far more visible and they tend to actually have less authority and support. And I think in the Theresa May situation, that's especially clear given how her party has challenged her regularly throughout this process.

Oh, this phenomenon is far too frequent. You know there are examples everywhere. I mean the Icelandic prime minister, Katrín Jakobsdóttir, was appointed right after the financial crisis. She actually led beautifully throughout that and succeeded.

"Just because there are so few women, it's such a rare occurrence to have a woman leading a country, a company, in this situation that they're far more visible and they tend to actually have less authority and support."

When you look at the patterns, what happens after the crisis has passed? Are these women generally going to stay on in positions of power?

After the crisis has passed, some of these women have succeeded and done very well. You know, Mary Barra at General Motors is touted as being an exceptional CEO today and she definitely led GM out of this crisis. And you have others that have succeeded. But often these women, when they don't succeed, they get derailed from their career. They don't have other opportunities. They sort of just fade away and then they bring in — a term that we came up with, the "Savior effect" — they bring back in that traditional white male CEO.

Related: The real impact of a female president? More women in politics.

What is your take on how Theresa May has navigated this crisis?

You know, Theresa May's situation is such an extreme example of the "glass cliff." Here's something that she was not in favor of. You know, she was one of the few people, along with another woman at the time, to say, "I'm going to go ahead and take over and try to lead Britain out of this crisis." Whether you're in support of Theresa May or not, she was put in a very, very difficult position and without the support to navigate this effectively.