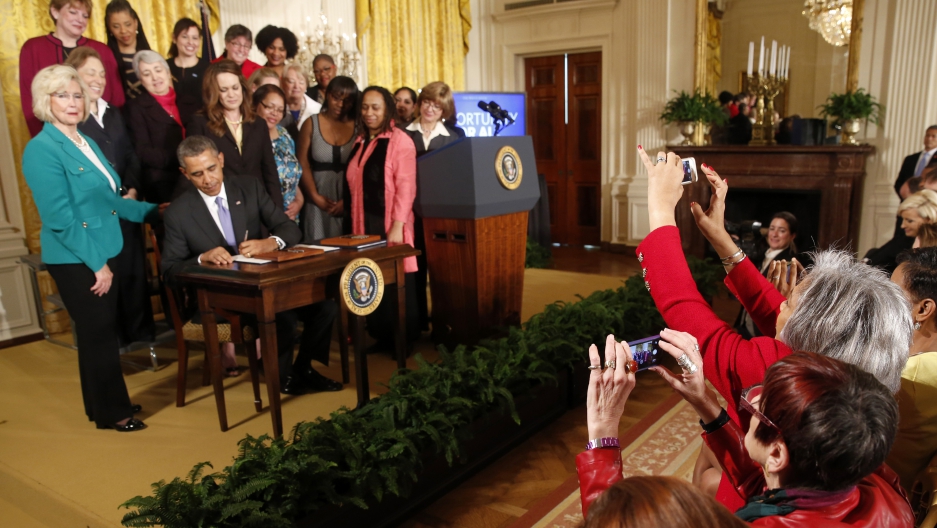 As the election between Hillary Clinton and Donald Trump nears, the prospects have never been greater that the United States could join the 50 other democracies that have been led by a woman.

Given Clinton’s mixed trajectory from antiwar activist to diplomat-in-chief and military interventionist, it’s hard to predict the shape her foreign policy might take as president.

But the long-term impact of a female president may be elsewhere: Research shows electing a female head of state often leads to an increase in women candidates down the ticket. And bringing more women into elected office leads to more peaceful foreign policy and a more robust democracy at home.

New research shows that when women reach the highest elected office, the proportion of female legislators increases by 6 percent relative to countries that have never had a woman at the helm.

“Shattering a glass ceiling is not just a symbolic victory for women in politics; it has real down-ticket effects,” says Curtis Bell, a research associate at the One Earth Future Foundation who analyzed the effect of female heads of state in democracies around the globe.

“We should expect that Hillary’s presence on the ticket will bring more women out to the polls, and that will help other female candidates for Congress across the U.S.”

If the US follows international trends, this could result in an estimated 30 more women being elected to Congress, increasing their proportion from 19 percent of members to 25 percent — over time. The benefits go beyond strides toward gender equality and a more representative democracy: A robust body of research shows that a greater proportion of female legislators has a profound effect on peace and security.

As the percentage of women in parliament increases by 5 percent, a nation is five times less likely to use violence when faced with an international crisis, according to American scholars who analyzed four decades of international data.

A higher proportion of women in parliament is also associated with a lower likelihood that a country will carry out human rights abuses such as political imprisonments, torture, killings and disappearances. In other words, there could be more diplomacy and greater integrity in US foreign policy in the years to come.

Why might more women in politics lead to a more peaceful approach?

Although their individual preferences may differ, on average women are less likely to support the use of military force and are more sensitive to the human costs of war and humanitarian concerns. Indeed, as the proportion of women increases in parliaments across established democracies, defense spending goes down. Instead, female legislators tend to increase foreign aid, particularly in education and health — which together form a pillar of peaceful and secure societies.

Perhaps because they often have firsthand experience with the effects of inequality, women also tend to place higher value than men on equality among ethnic, racial and other minority groups, whose marginalization so often leads to war.

Studies across 22 countries on five continents show that women are much more likely than men to reject hierarchies based on group belonging. In June, a Pew Research survey found that 69 percent of women in the United States consider treatment of racial and ethnic minorities as a very important voting issue compared to 56 percent of men.

These diverse priorities and complementary perspectives could bolster new pathways to peace — at home and abroad.

Individual women’s choices between war and peace may vary significantly — compare New Zealand’s Helen Clark to India’s Indira Gandhi. Often, a female candidate for president has to pursue a more hawkish foreign policy than her male counterparts to become and remain commander-in-chief. This may help her surmount gender stereotypes of women as weak and passive.

But cross-national research shows that as the percentage of women in parliament approaches 40 percent, the likelihood that those in executive office — female or male — will threaten or attack other countries approaches zero. When women reach a critical mass, everyone feels less pressure to act macho.

Creating a wave of new women in Parliament then increases the likelihood of more women candidates for president.  “As these women rise within their parties, a decade or two later you see another female head of state, coming out of this wave of women who were elected to the legislature when that first female head of state took office,” says Bell, of One Earth Future.

Changes often happen slowly. Even if Clinton wins, Congress may not immediately adjust. Kelly Dittmar, assistant professor of political science at Rutgers University–Camden, is more interested to see the effect in the next election, after women have had a chance to see whether American political institutions really are more open to them than before. Clinton’s commitment to appointing a gender-balanced cabinet could also help more women earn credentials for Congress in the long term.

As women have begun to ascend in the private sector, companies with more gender-balanced management teams have significantly outperformed those with the lowest female representation. General Mills just announced that any creative agencies it works with must be staffed with at least 50 percent women, saying “If you are going to put the people you serve first, the most important thing is to live up to it.”

Surely it’s time to bring more congressional gender balance for the sake of peace as well as gender equality. The benefits would extend to more domestic constituents too. Compared to their male counterparts, US congresswomen sponsor and co-sponsor more bills, and they bring $49 million — or 9 percent — more in federal programs to their home districts every year. Amid deep polarization, female senators have led bipartisan efforts to end a government shutdown and avert a federal default. With Congress’ approval rating stuck below 20 percent for the past five years, a greater proportion of women could also restore confidence in American democracy.

A female president can help make this happen. But as Clinton herself recognizes, “None of us can do it alone.”

Marie O'Reilly is head of research at The Institute for Inclusive Security.

An earlier version of this story misspelled Kelly Dittmar's name.