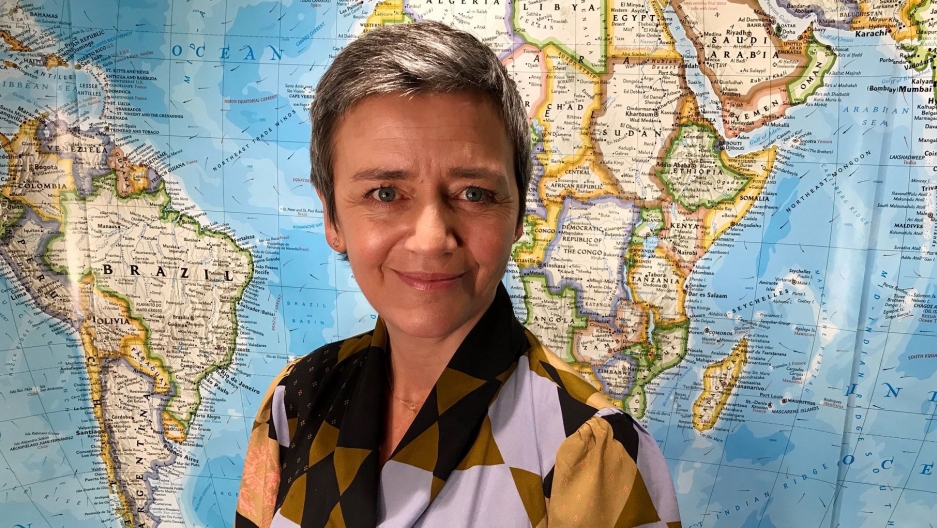 A requirement for Google's YouTube, Facebook's Instagram and other sharing platforms to install filters to catch copyright violations known as Article 13 (now renumbered to Article 17) has triggered protests, with an online petition garnering more than 5 million signatures so far.

The European Commission wants to reform copyright rules to protect Europe's cultural heritage and ensure fair compensation to publishers, broadcasters and artists. The European Parliament is due to vote on the commission's proposal on Tuesday.

And it was only last year when Facebook CEO Mark Zuckerberg said before Congress last year that "It's clear now that we didn't do enough to prevent these tools from being used for harm as well ... Our position is not that regulation is bad. I think the real question is: What is the right framework for this? Not, should there be one?"

One thing is certain: In Europe, the framework for reining in high-tech companies is taking shape faster than in the US.

Margrethe Vestager is the EU's competition commissioner and former deputy prime minister of Denmark. She serves as a powerful force in the regulation of global businesses, and she joined The World's host Marco Werman in the studio to explain the impact that her role has and how regulations are decided.

Marco Werman: Can I ask you first of all, what does your title actually mean, commissioner for competition?

Margrethe Vestager: Well, it means that I'm the law enforcer. So, it's my job to have the leadership of the law enforcement of European competition law.

You've been in that position since 2014. What does that mean practically when you're looking at US, high-tech companies like Google. Google searches account for 9 out of 10 searches in the EU, correct?

That's correct, yes. Everyone is welcome to do business in Europe. No matter the flag you're flying or where you have your home, but you will have to do business according to the European rulebook, when in Europe. This is why when someone complains or when we ourselves get a suspicion that something is wrong, we start investigating. 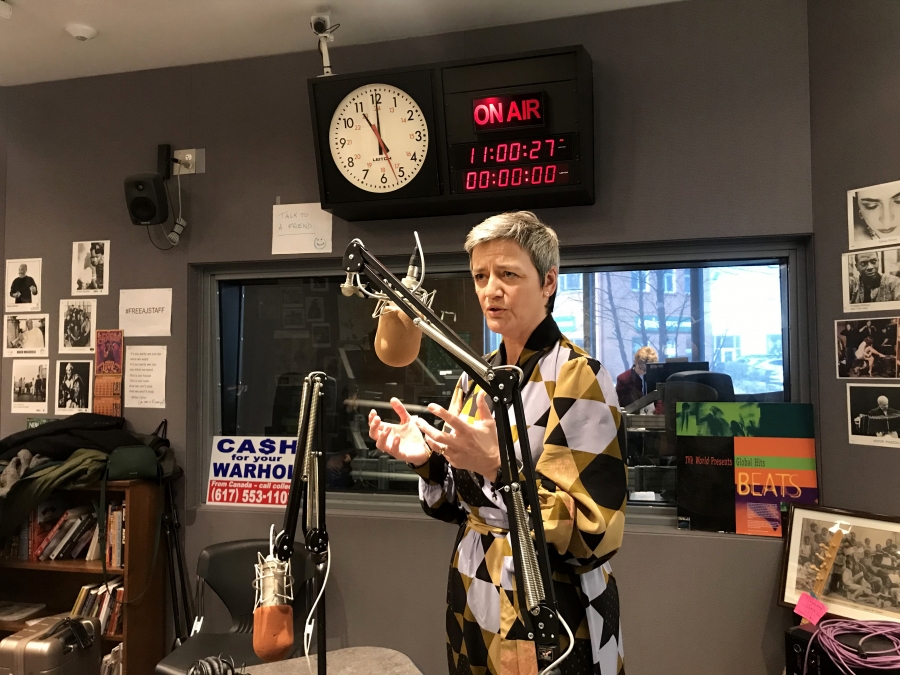 What do you consider something that is wrong? What would you start to investigate?

Well, take the first Google case. Here, you have a company which is dominant in search which has then used search to promote its own shopping comparison service and demote rivals in shopping comparison services, on average, to page four. This is a misuse of your success. You're more than welcome to be successful, but if you do become dominant. you get a special responsibility. The more power you have, the stronger your responsibility.

So, the EU has fined Google three times in recent years. The most recent came down last week, a fine of $1.7 billion dollars. Are these fines meant to be big enough to dissuade companies from repeating their wrongdoing? Or, like in the case of Google, that they just see this as the cost of doing business?

Well, there are a number of functions when we take a decision. One is to fine past behavior. Second is to say, "You've got to stop what you did and you cannot do anything to the equivalence." And then, of course, to start remedying the marketplace. What we see now after the Google shopping decision is that the shopping unit, the shopping box, has been opened to rivals. Now, I think in 3 out of 4 searches for a product, you would find rivals in the shopping box and in 40 percent of clicks on a product, that click would go to a rival of Google, to a merchant that is not in the Google universe. So, you see that the market is improving.

It seems there are really two big issues here: the monopoly trend that seems to dominate high tech and also the privacy problems. Which is more important to you as a regulator and as the commissioner for competition in the EU?

Competition legislation is a very strong tool, but just because you have a very big hammer you shouldn't think that everything is a nail. I think it is important that competition law enforcement works with regulation because you cannot do everything by competition tools. You need also the marketplace to be framed by, for instance, privacy issues, copyright issues, in order for this not to turn into something Wild West, where you basically just see the consumer as part of your product.

You're the former deputy prime minister of Denmark. Some people will hear your comments and say, "The biggest and most successful firms in the world came from countries with the least rigid regulations." Do you think regulation stifles the innovation we all want?

No, I don't think so. I think regulation works sometimes as an incentive. Of course, it very much depends on your state of mind. If you just want a completely open space to innovate or you say, "Well, I consider these to be things that I will build in, I will do, for instance, privacy by design instead of as an add-on. I'll add on something more or less superficial in the end." Instead of saying, "Of course, I respect the privacy of the people who will use my services." So, this is my starting point.

What about on the consumer end, because at the end of the day, a lot of people will say that they just want a high-speed, reliable search engine. They want their GPS directions fast. Privacy almost seems like an afterthought for a lot of consumers. You're the person that looks after consumers — how do you square that circle?

When it comes to privacy, we have different preferences. Some people really value their privacy. Some people really couldn't care less. What we're trying to say is that we can take legitimate decisions in our democracy as how to balance that, because our digital citizen rights, they are not for the most private person and they are not for the one who doesn't care at all. It's a balanced approach to say, "If you if you do this, then we can all find ourselves in this space."

Related: European lawmakers had tough questions for Mark Zuckerberg. For the most part, he ducked them.

We reached out to Google and told them we were going to be speaking with you today. Kent Walker, senior vice president of global affairs at Google told us in writing: "We've always agreed that healthy, thriving markets are in everyone's interest. We've already made a wide range of changes to our products to address the Commission's concerns. Over the next few months, we'll be making further updates to give more visibility to rivals in Europe." Are you satisfied with that statement? Is Google doing enough regarding privacy and competition?

He's absolutely right to say that Google has made a number of changes for rivals to be visible in this marketplace. When it comes to shopping comparison services, I think they're important for everyone so that you can find the cheapest product available in the quality you want, with the after services that you would be expecting, with the low shipping costs. In the Android case, they will be providing you a choice screen if the Google products have been preinstalled, so that you yourself can choose what do you actually want to do. So, yes, they are making a number of changes.

In the interest of open competition, you told an audience at the South by Southwest (SXSW) festival that you use a search engine called Qwant, which I just tried out. I found myself looking for Google Earth on Qwant. There are just some things that you can't escape aren't there?

Well, I think to some degree, you're right. I myself try to maintain curiosity.

What does Qwant give you that Google doesn't?

First of all, I get the results I'm looking for very often as the first result. I don't have to scroll through advertising and of course, that's a matter of preference. This is my preference.