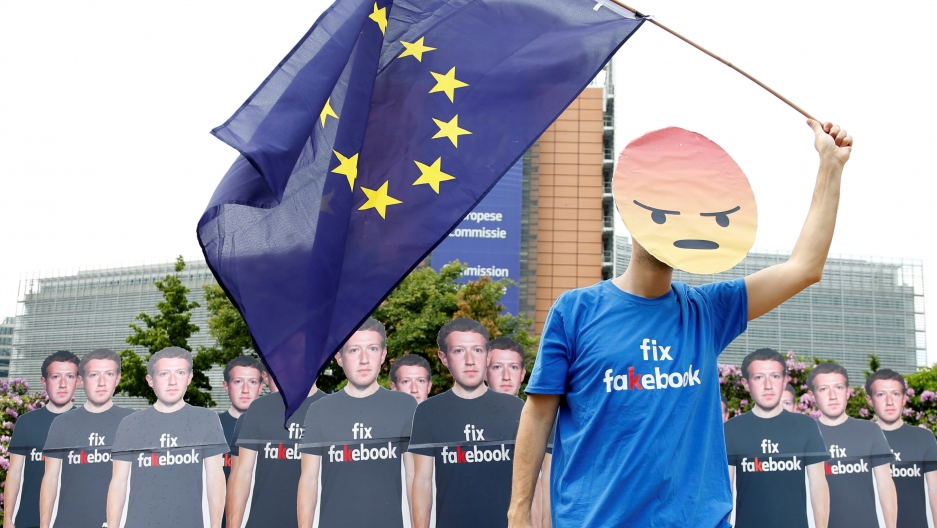 A protester holds an European Union flag next to cardboard cutouts depicting Facebook CEO Mark Zuckerberg during a demonstration ahead of a meeting between Zuckerberg and leaders of the European Parliament in Brussels, Belgium, May 22, 2018.

They blamed the panel’s format for the lack of clarity. It wasn’t until after all 12 MEPs present had taken turns posing a slew of questions to Zuckerberg — ranging from how the company plans to comply with the European Union’s oncoming General Data Protection Regulation, to what it’s doing to prevent foreign interference in future elections — that Zuckerberg had a chance to respond.

EU lawmakers are asking some hard questions, but the format could make it easier for Zuck to avoid answering them. All the questions are asked first, then he has to answer them in bulk.

Following nearly an hour of questioning, Zuckerberg was left with about 25 minutes to selectively answer questions before the meeting ended.

“I asked you six yes-and-no questions, and I got not a single answer,” Belgian MEP Guy Verhofstadt told Zuckerberg as Tuesday’s meeting drew to a chaotic end, with several MEPs lamenting the lack of substantive answers.

“Of course, you asked for this format for a reason,” Verhofstadt added, implying Zuckerberg intentionally favored a format that would allow him to dodge questions.

Here are some of the biggest questions Zuckerberg ducked:

1. Is Facebook a monopoly? And should it be broken up?

Zuckerberg faced several tough questions about whether Facebook has a monopoly on the kinds of services it provides, and whether his empire —which also includes Facebook Messenger, Instagram and WhatsApp —needs to be broken up.

“I have to say, as a politician, I believe in markets and rules. But I also want to stop all kinds of possible monopolies,” German MEP Manfred Weber said. “That’s why I think it is time to discuss breaking [the] Facebook monopoly, because it’s already too much power in only one hand… Can you convince me not to do so?”

Later in the hearing, Belgian's Verhofstadt cast doubt on whether Zuckerberg could sufficiently answer the question.

“You cannot convince him, because it’s nonsense,” Verhofstadt told Zuckerberg in reference to Weber. “You have given the example of Twitter, you have given the example of Google as some of your competitors. But it’s like somebody who has a monopoly in making cars is saying, ‘Look, I have a monopoly making cars, but there is no problem. You can take a plane. You can take a train. You can even take your bike.’ So there is a problem there.”

Verhofstadt then posed two follow-up questions: “Could you, or would you cooperate with European trust authorities to examine [this] and to open your books so that we can see if … it’s a monopoly? And secondly, if you have to split off, for example, Facebook Messenger and WhatsApp and to keep Instagram, should that be a good deal for you that you would accept?”

Zuckerberg answered the questions only in part, avoiding any specifics.

“We exist in a very competitive space where people use a lot of different tools for communication,” Zuckerberg said. “From where I sit, it feels like there are new competitors coming up every day.”

“Around the world there are 70 million small businesses that use Facebook's tools to grow and reach customers,” Zuckerberg said, referring to Facebook’s marketing and advertising services. “I think when you're thinking about the overall ecosystem and competition … that's a very important part to take into account.”

This isn’t the first time Facebook has faced antitrust concerns.

Zuckerberg confronted similar questions when he appeared before Congress earlier this year.

A sweeping data protection law is set to go into effect in the EU on Friday. Zuckerberg faced questions Tuesday about how his company plans to comply.

The General Data Protection Regulation (GDPR), which covers all 28 EU member states, will do the following, according to the The Washington Post:

"Companies will have to post clear notices for users and get their “unambiguous” consent to collect data, instead of burying an OK inside fine print and legal jargon. That means the EU will no longer tolerate the confusing “terms and conditions” that must be agreed to while signing up for a fitness tracking app or ordering groceries online. It will be as easy for consumers to opt out of giving consent as to opt in, and they’ll have the right to refuse that their data be used for direct marketing purposes. Consumers will have the right to retrieve their data and give (or sell) it to another business. Collection of data on children under the age of 16 will be banned without parental approval."

Zuckerberg said Facebook will be “fully compliant” with the new regulation on May 25. He has previously said many of the changes made as part of the compliance process will be available to users around the world, including the US.

But he did not answer a question Tuesday about reports that the company recently took a step to ensure that 1.5 billion users who live outside of the EU won’t be subject to GDPR protections.

Reuters was first to report the story in April:

“Facebook members outside the United States and Canada, whether they know it or not, are currently governed by terms of service agreed with the company’s international headquarters in Ireland.

Next month, Facebook is planning to make that the case for only European users, meaning 1.5 billion members in Africa, Asia, Australia and Latin America will not fall under the European Union’s General Data Protection Regulation (GDPR).”

“Is this the case? Have you really taken 1.5 billion people outside of the effective reach of regulations? People from other parts of the world who were previously covered that now will not be covered?” asked German MEP Gabriele Zimmer. Zuckerberg did not respond. ​

3. What is the extent of data collection on non-users of Facebook?

During Tuesday’s panel, Zuckerberg was questioned about how the company collects data from so-called “shadow” profiles. These are profiles of people who don’t use Facebook, but who may engage with the company’s ad and analytics tools outside of the site.

During last month’s Congressional hearing in the US, Zuckerberg, citing security reasons, said his company does collect “data of people who have not signed up for Facebook.” But the company has offered few details about the extent and nature of that type of data collection.

“Is the only way of preventing Facebook collecting my data to avoid the internet altogether?” British MEP Syed Kamall asked Tuesday. “Or is there another way? How can can non-users stop Facebook [from] collecting their data? And what do you do with the non-Facebook data? Do you commercialize it? ... Is it morally acceptable, you think, in your opinion, to collect non-Facebook users’ data?... If I’m a non-Facebook user, am I able to see the data you’ve collected on me? And If I’m not, why not?”

Though Zuckerberg didn’t voluntarily respond, he provided what some have described as a “non-answer” during the answering portion of the meeting.

ZUCKERBERG: Is there anything else?

ZUCKERBERG: Sure. So to your question. The … content that websites and apps send us, we think it's very important that people have the ability to clear this, so we just launched — or just announced — that we're building and will soon launch this Clear History feature that allows you to clear all basic browsing history data.

Clearly dodging Kamall's first question, Zuckerberg then said his company collects data of Facebook users even when they’re not signed in to prevent them from misusing tools.

“But if you are not a Facebook user, how do you stop data being transferred?” Kamall continued.

“On a security side, we think it's important to keep it to protect people in our community,” Zuckerberg said, quickly moving on. “Were there any other themes that we want to get through?"

This was #Zuckerberg’s opportunity to show he understands that people not on Facebook don’t consent to having their data collected..... he didn’t. #zuckerberghearing https://t.co/OihpnAvtzK

Zuckerberg promised to respond in writing to unanswered questions.