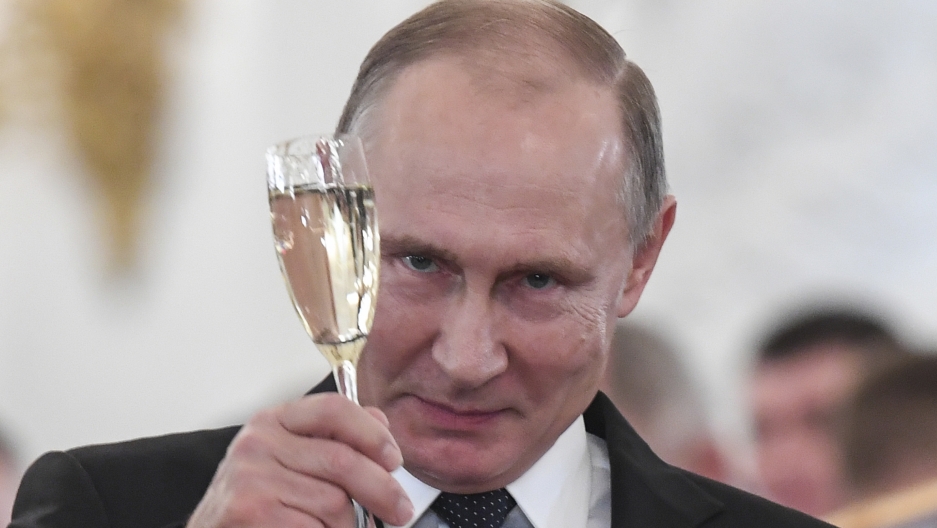 The end of the year seems like a good time to review what is really known about Russian interference in the 2016 election, and the nature of the contacts between the Trump campaign and the Kremlin.

Marco Werman: How do we know that Russia actually attempted to influence the election?

Mark Mazzetti: We base it on the near-universal assessment of American intelligence, law enforcement officials, foreign governments, etc., that Russia did in fact attempt to disrupt the 2016 campaign. I think that is not really in dispute at the moment, even though to a large extent the American intelligence community hasn't really shown its work to provide direct evidence of why. But after a year of reporting, I don't, and my colleagues don't, and our competitors don't, really hear anyone who credibly questions whether it happened.

And are you still using the word “alleged” to describe this?

So what exactly did the Russians do, or, at least, what do we know they did?

What is pretty firmly established now is that Russians, or people working on behalf of the Russians, carried out a pretty extensive campaign of hacking Democrats, Democratic operatives, the DNC, advisers to Secretary of State Hillary Clinton, and spilling those emails out as a way to discredit her and her campaign. There was also a parallel effort by the Russians, or again people working on behalf of the Russians, to spread propaganda and fake news through Facebook, Twitter, etc., that would be particularly damaging to the Clinton campaign and would in effect help out the Trump campaign in 2016.

Are we looking at Russia simpaticos who want to mess with American minds, or do you see at least some Kremlin fingerprints on this disinformation campaign?

Again, we have to go with the very firm assessment of the intelligence community — that this was directed by the Kremlin as part of a very concerted effort to weaken Hillary Clinton and, eventually, towards the end of it, to specifically help Donald Trump. They saw him as the preferred candidate for Moscow who would possibly look at a fresh relationship with Russia, as opposed to Clinton, who they saw as continuing the policies of the Obama administration, which was far more adversarial towards Moscow.

So then we can state as incontrovertible fact that Russia attempted to influence the election. What do we know about what kind of impact this influence operation had on the election?

That's where it's a lot less clear. The intelligence community was agnostic on the idea of, you know, did it work? Did it affect the election? And you know these things are very hard to determine; what leads to someone casting their vote a certain way? I think that very essential question is still not answered, and it may never be answered.

The other big question is what do we know about connections between the Trump campaign team and Russia?

At the beginning of the year, the Trump campaign and the new administration was pretty firm that there was no coordination whatsoever with any Russians. That there were no meetings, contacts, whatsoever, with Russian officials in the year or so before the election. We now know that is not true.

And so at the very least, we know that there were at least low-level attempts at some kind of coordination, whatever you want to call it, between the Trump campaign and Moscow. Now whether that ascended to the highest levels, whether that was something that Donald Trump specifically wanted, that's really where we're going into next year with an open question.

And I assume the question also will be: Were any of those meetings improper?

There's no question that there has been this anti-Trump fervor on the left, promoting some pretty wild aspects of this Russia story that have never been corroborated. They don't appear to have any grounding in fact. And it has been a challenge for us, and for other news organizations, to not get caught up in that and to try to follow the investigation where it goes, and not believe every aspect of this story, even if it might have an air of plausibility.