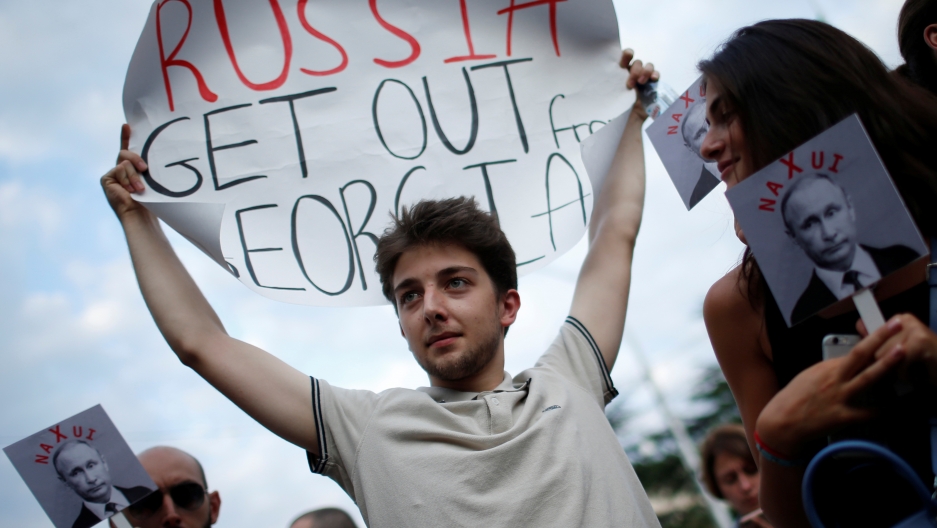 People attend a protest on the 10th anniversary of Georgian-Russian war in Tbilisi, Georgia, on Aug. 7, 2018.

Lt. Gen. Ben Hodges is the former commander of the US Army in Europe and an expert at the Center for European Policy Analysis. He joined The World host Marco Werman to discuss his perspective on the recent NATO-Georgia joint military exercise and the region's security against Russia.

Marco Werman: These military exercises in Georgia look like NATO is poking the Russian bear. Why is that?

Lt. Gen. Ben Hodges: Of course, Marco, we're not poking the Russian bear, we're working with a country that has been with us in Afghanistan and has been a partner for years and it is the path to membership in the alliance, yet has 20 percent of its country occupied by Russian forces 10 years after the Russians said that they would leave. So I would disagree with your characterization that we are somehow poking the Russian bear.

More than 10 years ago, NATO agreed that Georgia would eventually join the pact. Why has it not happened?

I think there's probably a couple of reasons. To me personally, Georgia should be a member of the alliance right now. They've got nothing left to prove, but I believe there are some member nations that are reluctant because they do see that Russian troops still occupy 20 percent of Georgia. So in effect, those nations are giving Russia a veto over membership in the alliance, and I don't think that's right. I believe that Russia respects strength, and if the alliance is strong and Georgia is welcomed into the alliance, then I don't believe that Russia will act on that, because the last thing they want is a conflict with NATO.

"To me personally, Georgia should be a member of the alliance right now."

What have you heard from Georgians about their hopes and fears for the future? Do they see NATO membership as one of the few options for defense against Russia?

I think that the Georgians are rightfully frustrated that, after years of being told that they were going to be welcomed into the alliance that it still hasn't happened yet, which is exactly what the Russians want. So there is some frustration, but most of the responsible military, political, and academic leaders in Georgia that I've spoken with are confident that this is eventually going to happen. So, I'm confident that its eventually going to happen. It's just — I wish it was happening sooner rather than later.

As you know there are a lot of people who look at NATO and say relations have been undermined and weakened by President Donald Trump. How do you see it?

To be fair, since [Trump] became president, everything that President Obama promised to the alliance such as rotational forces, prepositioned equipment, and increased spending has all happened. Everything that President Obama promised has been delivered under the Trump administration. I think it's important to keep that in mind. It's just so unhelpful when he's kicking the most important allies in the ass publicly and doing things that are not helpful. I never in my life imagined an American president would call into question Article 5. That's unbelievable to me and it's causing people to have to do a lot of extra work to explain "Don't worry, we're still committed, and we're here."

"I never in my life imagined an American president would call into question Article 5. That's unbelievable to me and it's causing people to have to do a lot of extra work to explain 'Don't worry, we're still committed, and we're here.'"

Well, speaking of Article 5, that's the part of NATO that states that an attack on one member is an attack on all members. You support Georgia being part of NATO. Do you think Americans are ready to die for Georgia if Russian tanks roll in once more?

We have American soldiers that are there almost nonstop. We've had Georgians died alongside Americans in Afghanistan. When you think about what Georgia does and how the United States traditionally loves small countries like this that have a fighting spirit and that are willing to do what it takes for their own independence, I think you would find very strong support in the United States, particularly in the Congress, for this. So I would not see that as a problem at all. Now, at the end of the day, it does come down to civilian leadership explaining it to the population, just like in every other country, why it is we're doing what we're doing and why it's to the overall benefit of all of us to have collective security.