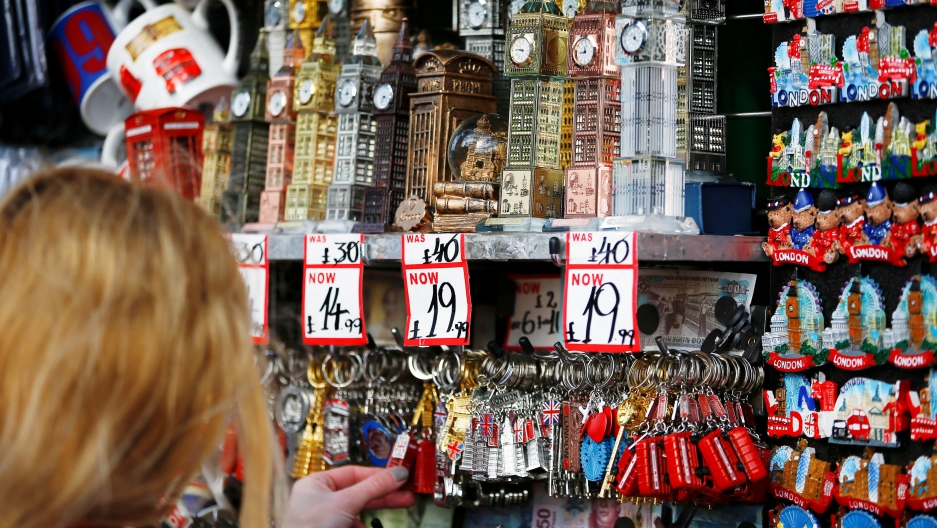 A woman looks at souvenirs for sale outside the Houses of Parliament in London, Feb. 7, 2019.

It seems that the United Kingdom is getting more than its fair share of the spotlight on late-night TV these days — what with all the confusion around Brexit. Like in this recent sketch from "Late Night with Seth Meyers." It spoofs the difficulty of explaining Brexit, especially from across the pond — an American woman in a fictional TV commercial cracks that she has heard Brexit is "the most important meal of the day."

Harriet Cross is the British consul general in Boston. That means it's her job to represent the UK government — she's "responsible for consular, visa and trade activities in their city or region," her office's website says. In other words, Cross is charged with selling the UK brand to the rest of the world. Meanwhile, the news is chock-full of stories about companies and individuals hopping the pond over Brexit fears. So, how do you market the UK amid the chaos of Brexit?

The World's Marco Werman spoke with Cross about how the UK is grappling with its international image as Brexit continues to slog along.

Marco Werman: In one sentence, Harriet, what's going on? Is the UK leaving the EU or not?

Harriet Cross: I think we wait and see, that's very much our intention. That's what the people voted for in June 2016 and that's what the prime minister intends to happen.

So, you've heard the jokes; you've heard the late-night TV gags about how the confusion over Brexit has made the British government a laughingstock in some circles. How do you sell brand Britain at a time like this?

I think comedians should always make fun of politicians. I think it's really healthy, and they always have. So, for me, that's absolutely fine. I think it's really important, and I don't think that the British brand has been particularly damaged by Brexit — actually not very much at all.

My job is much broader than just representing the British government. So, British values is absolutely something I promote, and I am paid to promote, if you like. We do a lot on LGBT rights. We're fighting against the death penalty. The British film industry — you look at "The Crown" — a lot of the amazing strength of the British sort of soft power is still phenomenal. Olivia Colman won her Oscar, and people loved it. And that all feeds into my ability to promote the UK effectively.

I don't know if you've encountered this, but if there's a US company trying to open a production facility or headquarters in Europe, how do you persuade them right now in 2019 to invest in the UK instead?

So, there's lots of ways we would do that. One is ease of doing business. So, the UK is in the top three or four countries in the world in terms of our legal system — the accountants, the lawyers that we've got. It means that as a business, you can set up easily and you can be sure of getting fair treatment in the UK. That's quite powerful. The English language is another draw. The cultural atmosphere and the diversity of the UK is important to a lot of people. So, if you want to live in London, you are living in a multicultural, multifaith society with some of the best arts and cultures going on in the world. You literally cannot get that in Dublin, Paris or Frankfurt — despite all of those cities being amazing places to be; frankly, I would still prefer to live in London if I was a corporate banker, for example, for all those reasons I just said.

Related: At The France Show in London, fears, optimism and shrugs about Brexit

There's been some scaremongering going on since Brexit — like how it's creating problems, from a shortage of insulin to a shortage of toilet paper reported recently. I mean, stories like that are not going to help tourism. Are you finding yourself putting out fires of concern about the future of the UK from people who might want to travel?

I'm genuinely not. No. For example, the flights between the UK and Boston are growing. So, the tourism — is not a problem at all — not least because the dollar is worth more than it's ever been in comparison to the pound. So, you go over, and you get your bang for your buck in the UK now. The royal family, I think, has really seen a kind of resurgence in interest starting with Will and Kate, but then going on to the duke and duchess of Sussex. So, these are all reasons why people want to be in the UK. I've not met anybody who doesn't not want to be in the UK. People want to be there because it's still a globally important country.

What are you worried about with Brexit in the UK-US relationship? I mean, what might not be shielded by the special relationship, do you think?

We need to work on a free trade agreement and all that that involves; those conversations have started. So, that that kind of top-level stuff, that's the thing that we need to get right.

Harriet, you're a diplomat. I know I probably shouldn't ask this, but what do you feel personally about Brexit?

I think my personal opinions are not what I am paid to talk about. So, I find authenticity in everything that I talk about when I talk about the UK and I am genuinely passionate about the UK as a country and its ability to get through the challenges of Brexit. And I fully admit that it's a really challenging time, but I'm proud to be representing the UK. And that's that's what gets me through the day, if you like.