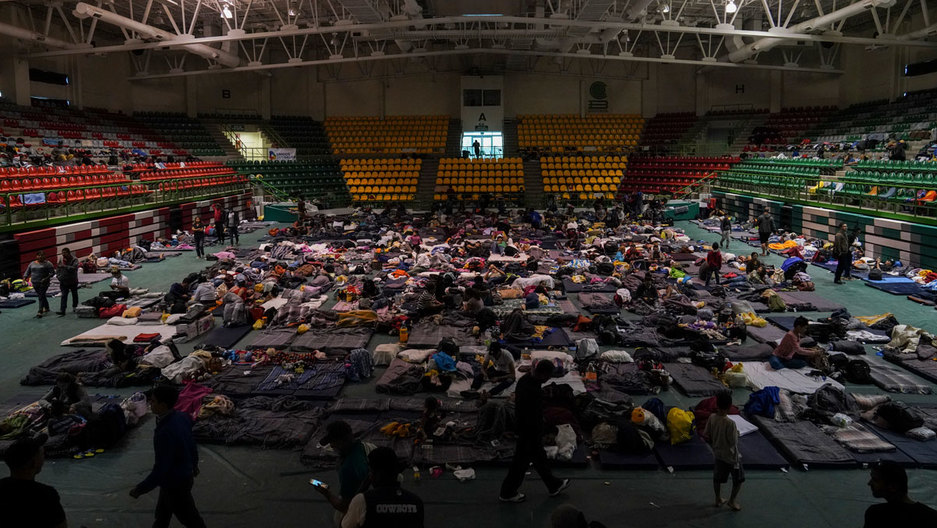 A lone shelter used to be enough to house most of the migrants passing through Mexico’s Ciudad Juárez in hopes of reaching the United States. But it quickly filled as the Trump administration has restricted entry at the border. An unprecedented thousands of migrants, many of them families, have arrived in the city, told the border crossing is safer and faster than in Tijuana and elsewhere. Juárez has struggled to keep up.

The city, which clasps the western tip of Texas and sits across the border from El Paso, is not equipped to handle these numbers. And as the United States’ controversial Migrant Protection Protocols policy — better known by its earlier name, “remain in Mexico” — is supposed to be expanded to El Paso this week, the coming return of migrants back to Ciudad Juárez could overwhelm the already strapped city.

Ciudad Juárez is a case study in how Mexican municipal and state-level officials are charged with handling the effects of increasingly restrictive US immigration policies largely on their own. The United States has restricted the number who may cross at the port of entry to about 30 people per day. The city has received little guidance — let alone financial aid — from the Mexican federal government, even as it swells with an influx of asylum-seekers. And local officials feel they’re often last to know of decisions made at the US-Mexico foreign policy level, though they’re on the front lines of implementation.

“We’ve been making a marathon effort to get resources, but this can create a social problem for people living in Juárez,” said Rogelio Pinal Castellanos, the city’s director of human rights. “If someone says, ‘I’m hungry,’ they’ll eventually ask, ‘Why are you, my government, spending money on someone who is not from Juárez?’” 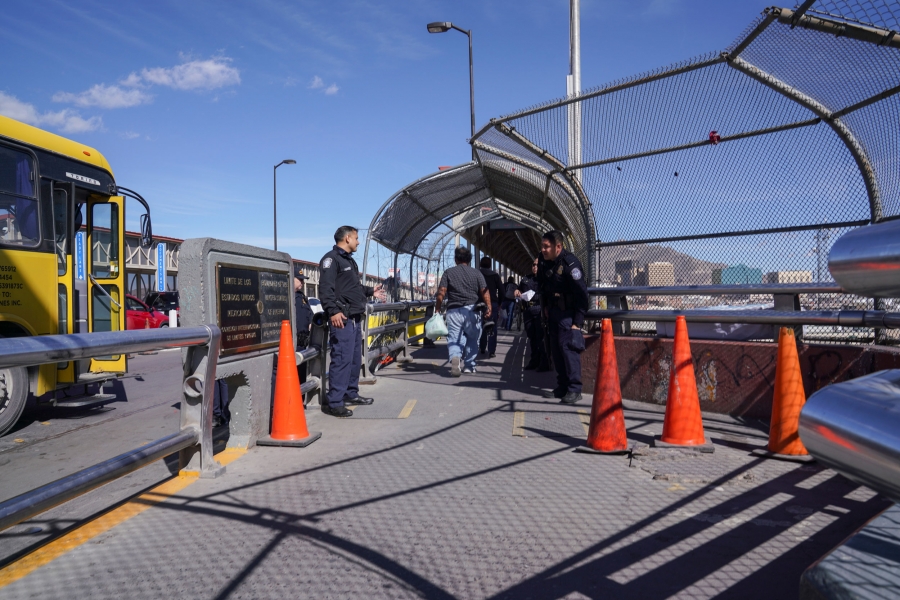 Customs and Border Protection agents check the legal documents of people crossing from Ciudad Juárez to El Paso on the bridge that divides the two cities in May 2019.

Under the new US policy, asylum seekers are processed at ports of entry, then returned to Mexico to wait for their US immigration court dates. It was previously rolled out along other sections of the US southern border, such as San Diego and later, Calexico. More than 312 have been returned so far, and the first migrants could be sent back to Juárez this week. The only save for the city could come from a lawsuit challenging the policy that was heard Friday in San Francisco federal court. Immigrant advocates have asked a judge to temporarily block the returns.

Juárez city officials don’t know what to plan for, since the US government policies seem as uncertain as the migrants’ routes. There are now six shelters. One is closing its doors so it can go back to functioning as a gymnasium for local students. Another, the Casa del Migrante, is packed and stopped accepting new arrivals last month.

Officials from Mexico’s immigration agency said Thursday they were awaiting confirmation on when returns to Juárez under the Migrant Protection Protocols would begin, but it is unclear where the migrants would go.

“The state government has to double its efforts to prepare large spaces to attend to this possibility, even though it’s not confirmed by any authority that it’s going to happen,” said Jair Hernández, a representative of the human rights commission of Chihuahua State, where Juárez is located. 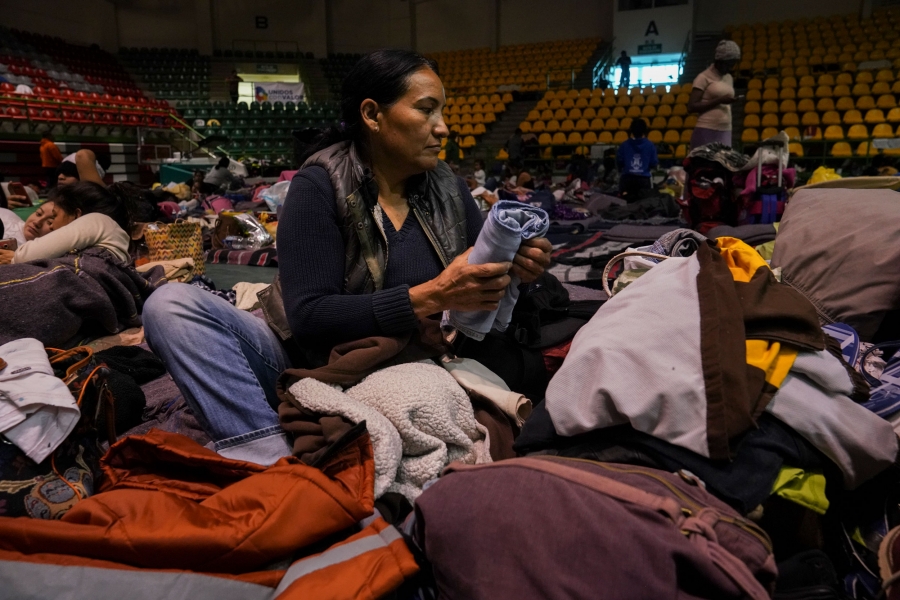 ‘This is a bottleneck’

If the US return policy is implemented along the Texas border as it was in California, it would apply primarily to asylum seekers who have waited to enter the US legally, at ports of entry. But it could also affect the thousands of people who, in recent weeks, have crossed the US border illegally close to El Paso before turning themselves in to US officials. 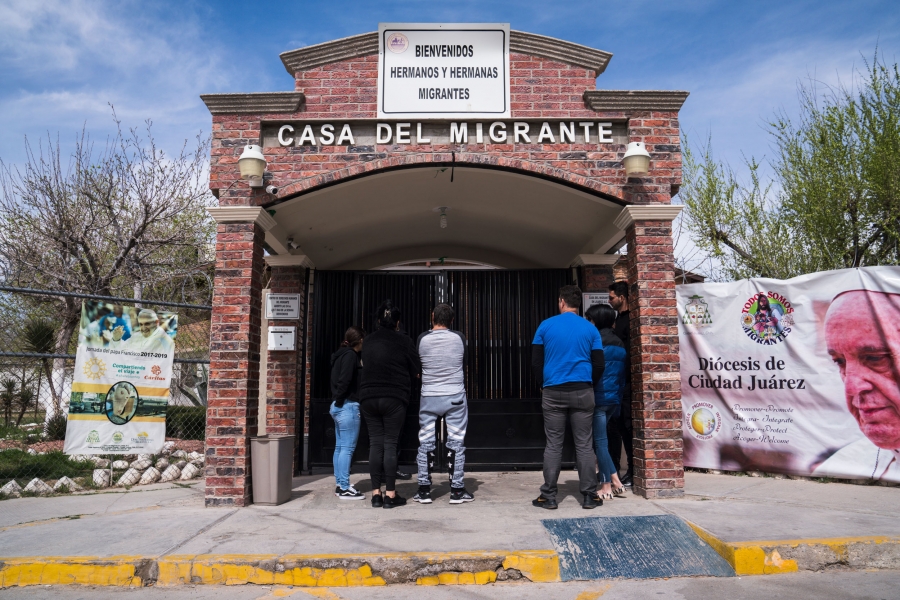 Migrants from Cuba wait in line at the Casa Del Migrante in Ciudad Juárez to check where they are on the asylum waitlist.

The government in Ciudad Juárez, with the help of Casa del Migrante, maintains a list of asylum seekers waiting at the port of entry. Some 9,000 people have added their names since October and more arrive each day.

“This is a bottleneck,” said Dirvin Luis García Gutierrez, coordinator of the migration program for Chihuahua State’s population agency. “Many of the people who arrived last year started to pass on the word, and we started to see large waves of peoples coming by bus or even plane.”

Earlier this month, Enrique Valenzuela, the population agency’s general coordinator, stood in the gymnasium and grasped the microphone as he spoke to migrants resting on cots. He assured them the US asylum process was being managed in an orderly fashion — and that everyone was working overtime to ensure that it was done fairly.

“I understand that many of you are desperate and probably uncertain,” he told them. “It’s been exceptional that 60 people cross in a day. Sometimes 45 get in, sometimes 30, sometimes 15 ... I’m asking you that you give us your vote of confidence.” 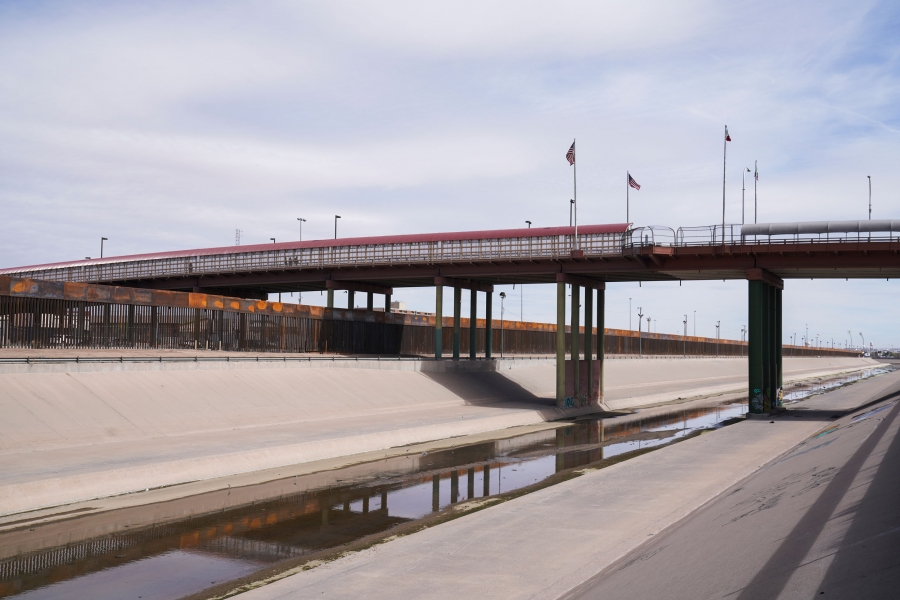 The border crossing — El Paso on the left and Ciudad Juárez on right — spans a dried up Rio Grande.

Migrants gathered around him to air their concerns, while others waited on the green and yellow chairs that once seated sports fans. Those sprawled in the lobby said they had nowhere to bathe as the city searched for additional space for them.

The city inaugurated a new office for migrant assistance in February, to help keep track of people staying in the shelters. The office, originally intended for people deported from the US, now primarily deals with migrants newly arrived from Cuba, who comprise the majority of those in Juárez’s shelters, in addition to others from southern Mexico and Central America. Some come from as far away as the Democratic Republic of the Congo, Venezuela and Russia.

Officials say they do not want to experience the same sort of chaos that unfolded in Tijuana, which saw an influx of thousands of migrants in November, when last year’s major migrant caravan reached the border. But as the city shuffled people around its shelter spaces, those who did not have money for hotels got impatient.

“We thought it was the safest here — there’s less of a wait. Cubans who came here made it to the United States,” said Carlos Somuano Latorres, 33, who had been waiting outside the gymnasium for days to be admitted, while asking Mexican immigration agents for help.

Advocates agree the city is not yet equipped for the return of any asylum seekers.

“El Paso and Juárez have not been important places of destination. They’ve been places of transit,” said Camilo Pérez-Bustillo, the director of advocacy and research for the faith-based Hope Border Institute in El Paso. “So the resources here are not framed in terms of having a permanent refugee population awaiting processing. The question is, do people have a place to sleep? A place to eat? A place to wait?”

US immigration policies mean they could be waiting a very long time.

Though thousands of migrants are lining up in Juárez, far more are bypassing the waitlist and are crossing the US border illegally. In recent months, they crossed mainly into remote, unpopulated areas of Texas. But in the past few weeks, US Border Patrol apprehended nearly 1,000 migrants in El Paso in a single day. On March 19 alone, 446 were apprehended near a local high school and in the downtown area, the El Paso Times reported. From October to February, 36,298 family units have been apprehended in the El Paso sector, compared to 2,029 the during the same period the previous year.

El Paso previously saw high levels of unauthorized migration in the 80s and 90s. Then, there were mostly Mexicans crossing. But it has never before seen such massive groups of other nationals turning themselves in to Border Patrol agents to request asylum. If they are turned back to Mexico, it could pose even more of an issue for Ciudad Juárez.

Migrants who are passing through already have to contend with the city’s dangers. Homicides have risen to a level not seen since nearly a decade ago, when drug cartels battled over territory. Three migrants said in January that they were extorted while being beaten in stash houses. Problems arise with criminal groups that charge migrants to cross the border.

Many crimes against migrants go undetected because people are hesitant to come forward as witnesses, according to Omar Bolado, a Mexican federal police officer. But after the murder of two migrant teenagers in Tijuana in December and a series of migrant kidnappings in Tamaulipas in March, Ciudad Juárez seems comparatively safe.

For many migrants, the gamble is worth it: María, 22, a migrant from El Salvador, said she paid $2,000 to cross the train tracks from Ciudad Juárez to El Paso with her 3-year-old, who had become sick after days of travel. US authorities released her to a local church, where she figured out how to reach to her family in Virginia.

“Over a decade ago, Juárez stopped being an important crossing point for people from Mexico to the US,” said Dr. Jesús Peña Muñoz, a professor at the Colegio de la Frontera Norte’s campus in Ciudad Juárez. “It’s surprised all of us when people started arriving and said it was the safest part of the border.” 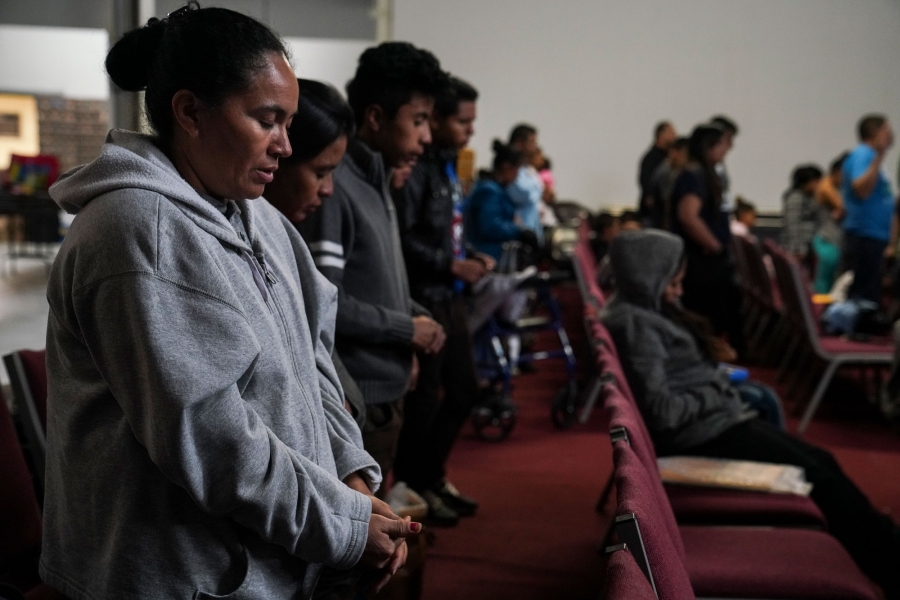 For now, the city is trying to ensure its new system for handling migrants does not fall apart. It faces constant strains amidst federal austerity measures: For example, last month, federal funds ran out to transport Mexican deportees to their states of origin, and Juárez had to find shelter space for them, too. But for the migrants, the fact that the city has maintained a sense of order has been enough to convince them to wait there.

“When I crossed into southern Mexico, someone told us that Juárez was the best place to go,” said Izeth Zavala, 44, who came from Honduras with six family members and had stayed in the gymnasium for weeks. “He said that here they were helping people.”

This might be the calm before the storm: Last Wednesday, the migrants who had started the same process weeks before her in California and had already been returned went to their first hearings in a tiny San Diego courtroom. Almost all were escorted back to Mexico immediately after the hearings, even though some said they were afraid of returning.

Zavala hoped that after weeks of waiting for her turn to seek asylum, she would be released into the United States and allowed to stay there. But if the US keeps its promise, she might find herself back in at another line of cots in Juárez, waiting once again for her turn to make her case for asylum.

This story was reported with support from the International Women’s Media Foundation.