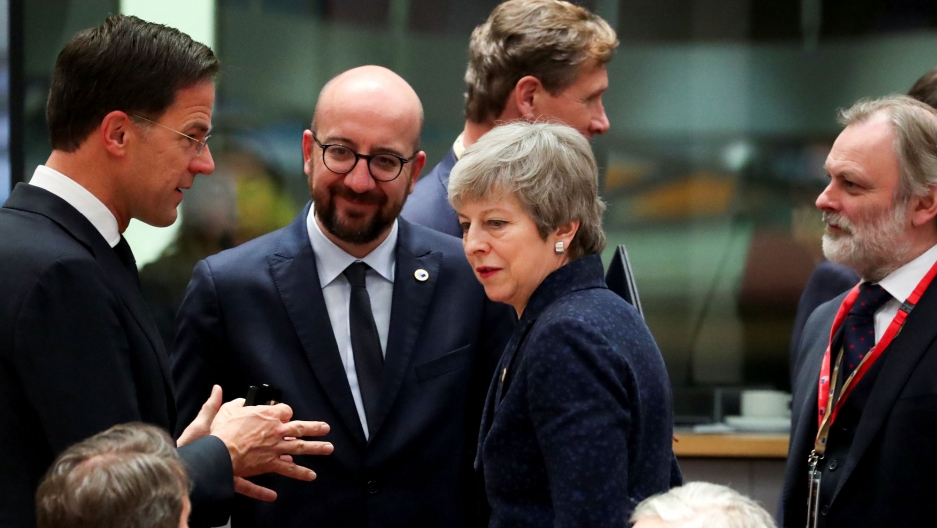 With just eight days before Britain is due to leave the European Union, French President Emmanuel Macron warned Prime Minister Theresa May that Britain would face a disorderly Brexit departure if she fails to get parliamentary approval for her deal.

May has been making a last-ditch plea to the EU bloc's 27 other leaders in Brussels to hand her a Brexit delay until June 30, a request she said was "a matter of personal regret" and one she firmly pinned on her country's deeply divided parliament.

EU leaders are expected to grant her two extra months to organize a smooth exit — but only on the condition that the British leader can get her deal through parliament, something even members of her own government increasingly doubt.

If she fails, leaders expect to meet again next week, to consider either a delay until next year to let Britain radically re-think its Brexit plans — or pulling the plug and letting it crash out into legal limbo next Friday.

Growing investor concerns that Britain could leave the EU without a deal sent sterling to a one-week low.

"We must be clear, to ourselves, our British friends and our people," Macron said on arrival at the 24-hour summit.

"Firstly, we've been negotiating the withdrawal agreement for two years. It cannot be renegotiated. Secondly, in the event of another no vote in Britain, we will be heading towards a no deal. Everyone knows it."

European leaders must not let the turmoil surrounding Brexit drag on, the French leader said.

The EU's negotiator Michel Barnier said with a note of resignation: "We have done our best. Now the solution is in London."

May said she was still working on getting parliament's support for her deal, which envisages close economic ties with the EU after Brexit.

"I am still working on ensuring that parliament can agree a deal so that we can leave in an orderly way," she told reporters, referring to talks ministers are having with pro-Brexit members of her Conservative Party and lawmakers in the Northern Irish party, the DUP, which props up her government.

"A short extension would give parliament the time to make a final choice that delivers on the result of the referendum."

EU diplomats said her request for a delay to June 30 was likely to be met by an EU preference for Britain to have completed formalities and begin a status-quo transition to departure before Europeans elect a new parliament from May 23.

"With regard to the date of June 30, we have to take into consideration that we have European elections in May," said German Chancellor Angela Merkel.

"We can discuss this wish next week if we have a positive vote in the British parliament on the exit agreement."

May's chances hang in the balance, with positions hardening after a chaotic week when the parliament's speaker questioned whether she could even bring her deal to a third vote.

The DUP, which gives May's government a majority in parliament, said it was no closer to backing her agreement, the party's Brexit spokesman said on Thursday, while euroskeptics also say they could never approve something they say would trap Britain in the EU's orbit indefinitely.

In a challenge to May, opposition Labour leader Jeremy Corbyn was also in Brussels, speaking to EU officials about his alternative plan for Brexit, which he says could be negotiated during an extension and pass through parliament.

Irish Prime Minister Leo Varadkar summed up the situation in London, with no little understatement, as "somewhat chaotic."

"We need to cut the entire British establishment a little bit of slack on this and support their request ... for a short extension," he told reporters. "No deal will only ever be a British choice."

With parliament and political parties divided, deadlock could mean Britain lurching by default into legal limbo outside the EU at 11 p.m. (2300 GMT) on March 29.

If the deal is saved, EU leaders would sign off remotely next week on an extension of the deadline to mid-May, or perhaps the end of June, before the new EU parliament convenes.

But if May fails next week, leaders expect to return for an emergency council at which Britain could either be given another year or more to sort out its crisis — if it can convince them it has a plan to do that — or be told it is leaving on Friday.

The other 27 states have struggled for three years since Britain voted 52-48 percent to leave to avoid disruption to their own economies and citizens of a hard Brexit.

Many now fear simply rolling over the problem for more weeks and months with no clear resolution in sight is doing more harm to a Union beset by populist nationalists likely to do well in the EU elections and by a fast-changing global economy in which China and the United States are posing new challenges.

As Brexit is sapping EU resources, the leaders will also turn to other pressing issues on Thursday and Friday, including the state of their economies, ties with China, climate change and protecting the European elections from illegitimate interference.

By Richard Lough and William James/Reuters