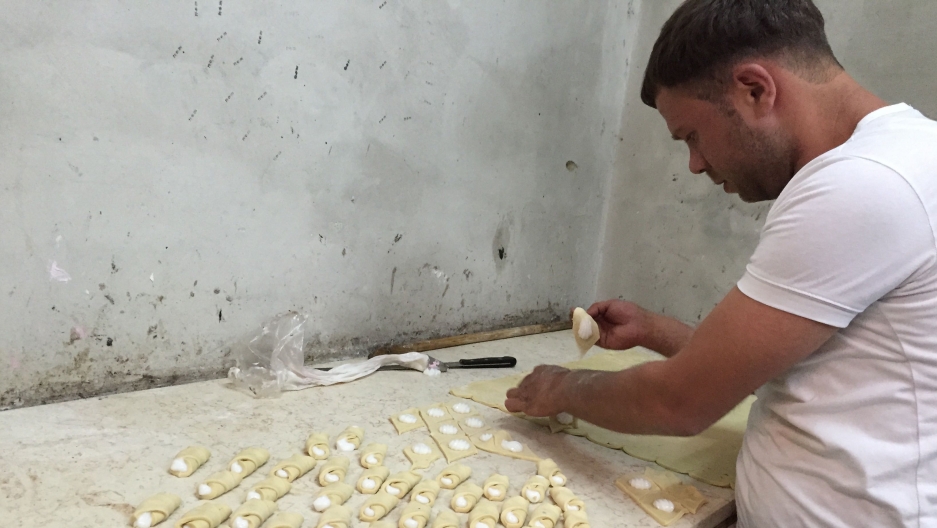 Hamed al-Amouri used to roll out the dough and stuff it with clotted cream or chocolate vegan fillings. He’d carefully place the pastries into a piping hot oven before setting them on a slab of marble to cool, with a dash of cinnamon.

He and his business partner, Khaled Safi, a vegetarian, owned what they say was the first and only vegan pastry bakery in the occupied Palestinian territories. The bakery first opened in 2016 in al-Jalazone, a refugee camp of about 14,000 residents located on the outskirts of the West Bank city of Ramallah.

Khaled and Amouri originally wanted to open a regular bakery, but Khaled's brother, Ahmed Safi, an animal rights activist who co-founded the Palestinian Animal League in 2011, suggested specializing in vegan goods. Ahmed had gone vegan in 2014 as part of his commitment to animal rights. 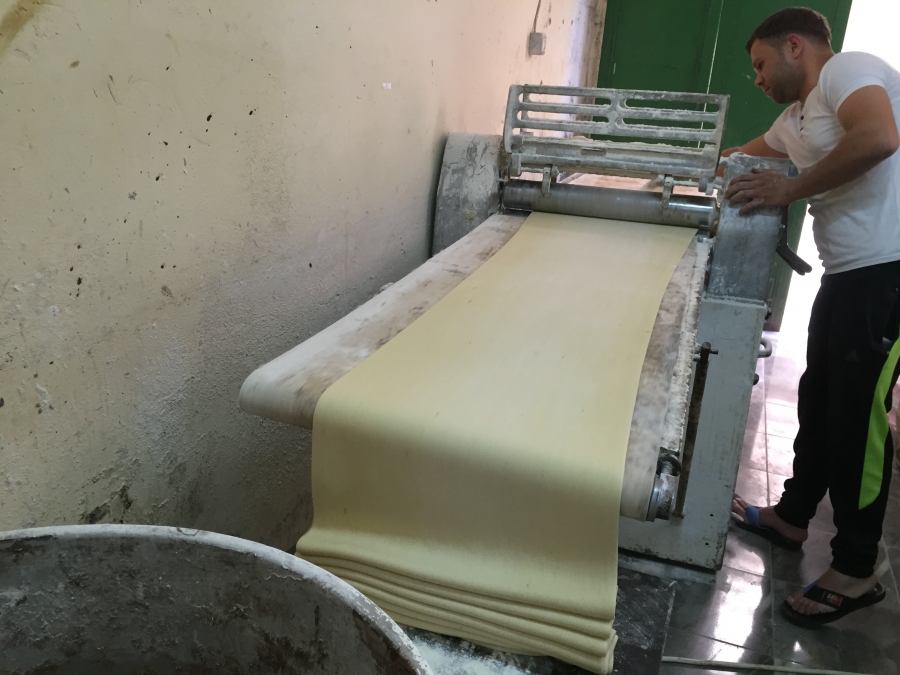 Hamed al-Amouri lays out the dough, rolling out any trapped air bubbles, in what was probably the first and only vegan pastry bakery in the occupied Palestinian territories.
Credit: Dalia Hatuqa/The World

The bakery sold an assortment of cakes, cinnamon-, chocolate- and jam-filled rolls, cupcakes, éclairs, pop cakes and muffins, as well as vegan wedding cakes upon request. Amouri used baking soda and vinegar as egg substitutes and vegan margarine instead of butter.

“The vegan bakery is a great alternative to traditional bakeries. ... Vegan products are healthier and if you look at people in the West, they are all moving towards veganism.”

“The vegan bakery is a great alternative to traditional bakeries,” Khaled said. “Vegan products are healthier and if you look at people in the West, they are all moving towards veganism.”

Jalazone residents responded positively to the bakery, but it still lacked steady clients. “Our problem was that we needed steady demand,” Khaled said. “People need to come around to the idea of vegan products.”

All their ingredients were either Palestinian-made or imported — nothing was Israeli — making them pricey, which affected demand and made marketing their goods a challenge, Khaled said.

The bakery had to shutter its doors last year. “There was some demand, but it was not enough,” Khaled said. “It was hard to market our goods. And there is not enough social awareness of the benefits of veganism.”

Related: She started #NotYourHabibti to shine a light on sexual harassment in the Palestinian territories

Meanwhile, across the wall that juts the West Bank and separates Palestinians from Israel and Jerusalem, Israelis have embraced veganism more so than any other population per capita, where 5 percent eschew animal products. 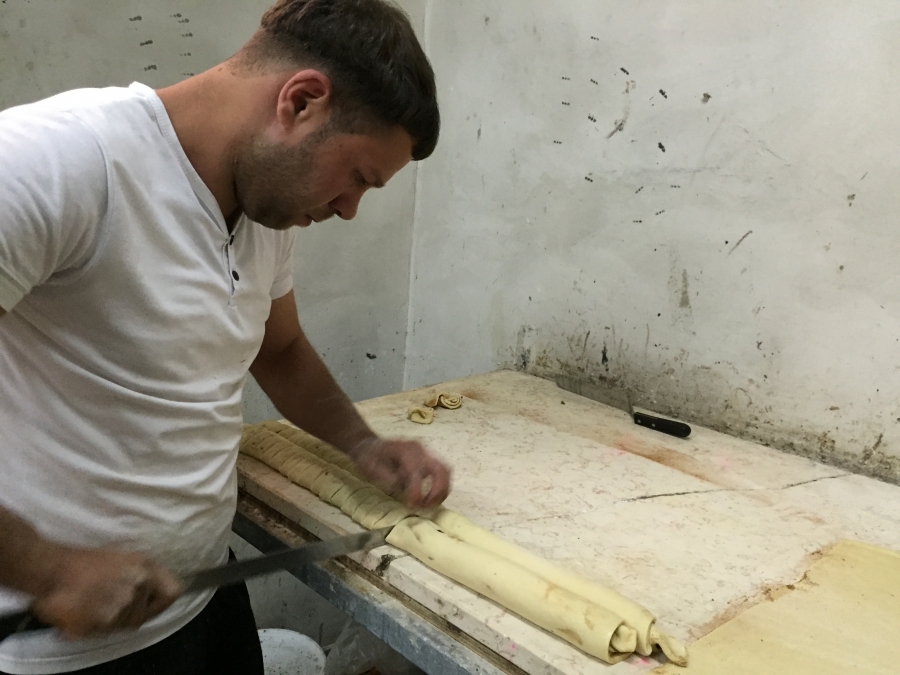 Hamed al-Amouri cuts each piece of dough into smaller parts. He and his business partner, Khaled Safi, opened a vegan bakery in 2016 in al-Jalazone, a refugee camp on the outskirts of the West Bank city of Ramallah.

But the Palestininan territories' burgeoning vegan community hesitates to cooperate with Israel’s vegan community on projects of common interest due to Israel's long-standing grip on the Palestinian population. Israel has occupied the West Bank since 1967 and has imposed systematic checkpoints and barriers that restrict and violate the human rights of Palestinians.

Ahmed adheres strictly to the BDS movement (boycott, divestment and sanctions) aimed at putting economic and political pressure on Israel to end its occupation of Arab territories.

Related: 'The Palestinian Table' is as much a memoir as a cookbook

“We will boycott them until they take a clear stand against the Israeli occupation [of the West Bank and Gaza] and until they recognize that our human rights are also important,” Ahmed said.

Israel has long presented itself as a vegan haven in a meat-eating region, Ahmed said. The Israeli army boasts providing specialized meals and leather-free boots to cater to its vegan soldiers, and the Knesset's cafeteria started Meatless Mondays in 2014. Ahmed sees this as "vegan-washing" — using veganism to polish Israel's image.

But the Israel Defense Forces disagrees. “The parallels drawn between the IDF’s concern for its vegan soldiers and human rights violations are cynical and irrelevant,” a spokesperson told The World. “The IDF acts to ensure the security against the terrorist groups active.”

“What good is it if an Israeli soldier is vegan and wears leather-free boots if his gun is aimed at Palestinians?”

Yet, the Israeli occupation is a point of contradiction for Ahmed when it comes to Israel’s stance on animal rights and human welfare. “What good is it if an Israeli soldier is vegan and wears leather-free boots if his gun is aimed at Palestinians?” he asked.

Almost 300 Palestinians in the West Bank — including East Jerusalem — and Gaza have been killed by Israeli forces in 2018, according to the United Nations Office for the Coordination of Humanitarian Affairs. Almost 32,000 were injured that year alone.

Vegan vision in the Palestinian territories

The Safi brothers believe that veganism and animal welfare go hand in hand. In 2016, around the same time that Khaled and Amouri opened their bakery at the refugee camp, Ahmed’s Palestinian Animal League supported the opening of Sudfeh, a vegan cafeteria on the campus of Al-Quds University, a Palestinian institution in Abu Dis, a Jerusalem suburb. 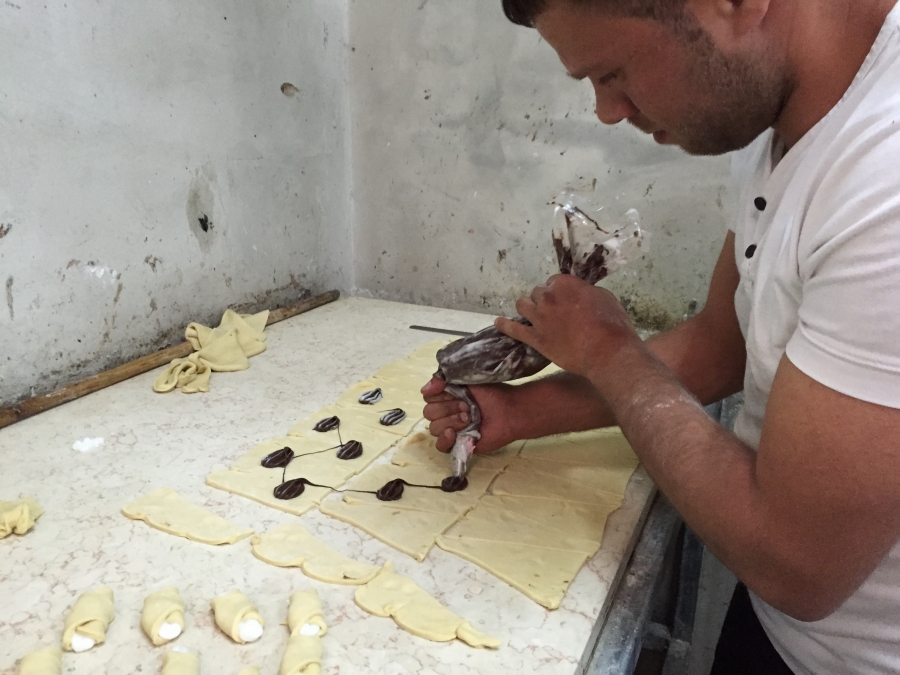 Hamed al-Amouri used baking soda and vinegar as a substitute for eggs, and vegan margarine instead of butter.

The league launched a worldwide appeal for funds hoping the new venture would raise awareness about animal welfare while providing healthy, plant-based foods to university students.

“If you become vegan, you save money, you become healthier and most importantly, you do not violate the rights of other creatures."

“We point out that the original Palestinian kitchen relies on vegetables, legumes and seeds. We tell people that it is the humanitarian choice, the healthier and cheaper one,” Ahmed said. “If you become vegan, you save money, you become healthier and most importantly, you do not violate the rights of other creatures.”

But skeptical customers couldn’t fully embrace the idea of a vegan diet. They complained about the high prices and expected dairy on the menu, and the cafeteria was forced to shutter.

Related: Objects from Palestine are now enshrined at a makeshift museum in this Beirut refugee camp

Economic, social and religious reasons could partly explain why veganism has not become widespread in the Palestinian territories.

“It is a privilege to be able to make a conscious decision to omit animal products from your diet. ... In Gaza, where I'm from ... they don't have the luxury to make a decision like [turning vegan] because it's good for the environment or their health. They're not even at that level. They're in survival mode.”

Traditional Palestinian farming and cooking was seasonal, heavily vegetable-based, and relied on grains, explained Laila el-Haddad, a Palestinian gastronomist and author. But meat dishes were served on special occasions when a baby was born, a visitor was in town or on a religious holiday.

“It is a privilege to be able to make a conscious decision to omit animal products from your diet,” Haddad said. “In Gaza, where I'm from, the vast majority are surviving on under $2 a day — and with what little they have, they struggle to access products available to them in the market using rations they may have from aid organizations and so forth, so they don't have the luxury to make a decision like [turning vegan] because it's good for the environment or their health. They're not even at that level. They're in survival mode.”

“In the Quran, you eat from the bounties provided to you by God, but you do so with respect to the environment and the animals,” she said. “Viewing it from these lenses, you can begin to understand why veganism isn't as popular.”

Veganism has not yet left an imprint on the Palestinian territories, but the Safi brothers have become mainstays in the small, meat-free movement in the West Bank, which centers around animal welfare and compassion.

“As Palestinians, we have suffered from injustices and depression so why should we mistreat smaller creatures? ... We do not want the cycle of violence to continue. This is the core theme of our work in the league.”

“As Palestinians, we have suffered from injustices and depression so why should we mistreat smaller creatures?” Ahmed said. “We do not want the cycle of violence to continue. This is the core theme of our work in the league.”

In Tulkarm, in the northern West Bank, the Palestinian Animal League has rescued and neutered well over 1,000 stray dogs. It also works with Bedouin Palestinians in Wadi al-Qelt, a deep canyon that stretches from the outskirts of Jerusalem down to Jericho, on creating better conditions for working animals.

The league recently opened a veterinary clinic at their Ramallah headquarters, providing a veterinarian two days a week to see animals in need for a nominal fee.

Yet, the politics of occupation impacts every facet of the group’s work. When it launched a dog sterilization effort, the league found that certain drugs necessary for the clinic were either banned or required special permission by Israeli authorities to enter the West Bank.

The league had to pay hefty customs duties to import trap cages and nets used to catch stray dogs, which the Israeli authorities held for three months, costing the group extra fines for storage.

According to the Applied Research Institute — Jerusalem, a Bethlehem-based group that promotes sustainable development, border compliance procedures imposed on Palestinian exporters are 2.6 times those imposed on their Israeli counterparts, subjecting them to more than double the cost associated with these delays.

“We paid $1,700 for this equipment, but we also had to pay an additional $2,000 for storage and other charges to various Israeli ministries. In the future, we will try to manufacture them locally,” Ahmed said.

The Palestinian Animal League believes that human and animal rights are indivisible and their continuous effort to protect vulnerable animals is a way to channel their frustrations with life under Israeli occupation.

These days, the Safi brothers are focused on the veterinary clinic and raising awareness about human and animal rights. They’re also looking at spaces to reopen Sudfeh in the more vegan-friendly setting of Ramallah, hoping to make veganism a new norm.