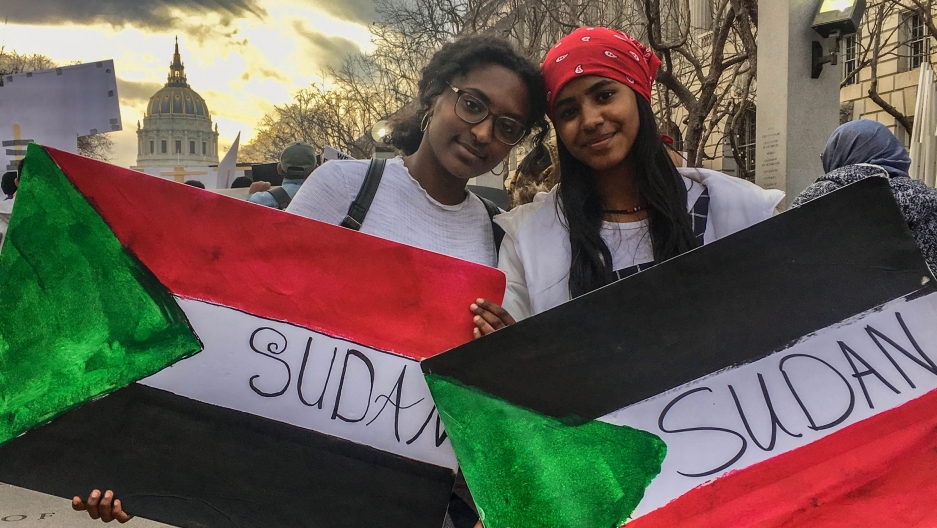 Haifaa Abushaiba, right, with her friend at a Sudan solidarity march in San Francisco, California.

Nearly two dozen people are gathered for a symposium in Hayward, California, about the recent protests in Sudan. Those who come to these Sudan-related events are usually adults — first-generation Sudanese immigrants to the United States.

First up is 17-year-old Maazin Ahmed, whose mother is Sudanese and father is African American. Maazin is the president of his college’s Black Students Union in Berkeley, California, a city familiar with protests. He says he grew up seeing pictures of his mom sporting an afro in the 70s in Sudan. She told him stories about better times in her home country.

Maazin is used to organizing, but it’s his first time addressing his Sudanese community elders. He draws parallels between the American civil rights movement and the uprising in Sudan. He points to the 60s, when the Black Panther party came about in the US.

‘“That's how [the civil rights movement] started — with the youth, and that's what they're doing in Sudan."

‘“That's how it started — with the youth, and that's what they're doing in Sudan,” he says.

Sudan is in its third month of protests sparked by the rising cost of bread and escalated to calling for an end to the 30-year rule of President Omar al-Bashir, who is wanted by the International Criminal Court for war crimes in Darfur. Bashir is also accused of heading a brutal dictatorship that includes corruption and flagrant human rights violations. The internet has been abuzz with videos of the protests and his government’s brutal crackdown on protesters. Amnesty International estimates more than 45 people have died, 180 have been injured, and thousands have been arrested so far. 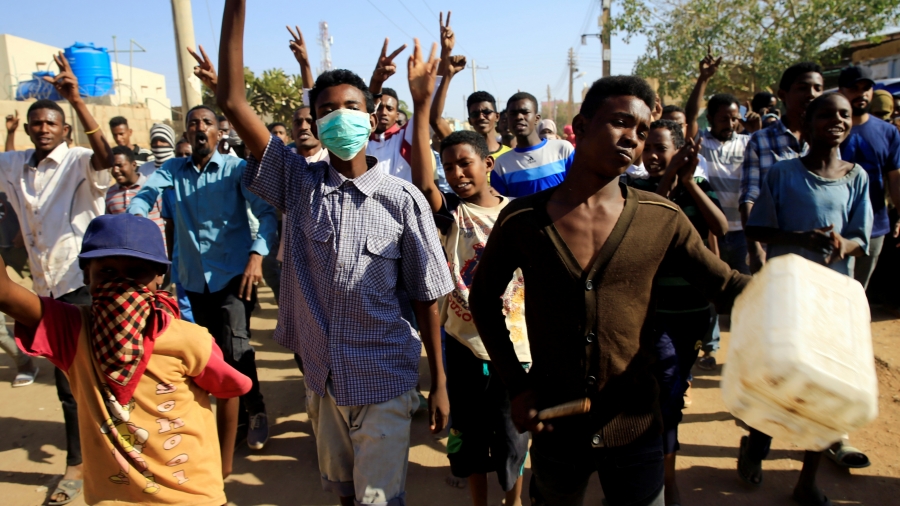 The uprising has inspired a new generation of Sudanese American youth like Maazin to get politically engaged with their motherland for the first time. Many of their parents migrated to the US years ago to flee the Bashir regime. These days, their American homes are filled with Sudanese protest music and excitement at the near-daily demonstrations, but also disgust and anxiety about the crackdown.

The teens have joined and organized Sudanese solidarity protests in cities such as Washington, DC, and San Francisco. They’re making protest art and marching alongside their parents, waving flags and chanting slogans against the Sudanese government in Arabic and English. And they’re watching what’s happening in Sudan via Instagram and Twitter, following hashtags like #SudanRevolts and #SudanUprising.

Another speaker at the Feb. 23 event in Hayward is 16-year-old Haifaa Abushaiba. Her parents drove 40 miles so she could participate. She gets close to the mic and slips between English and Arabic. It’s Arabeezy, a kind of teen-speak.

Since the protests began in December, Sudanese families worldwide have been glued to Facebook and WhatsApp, following the uprising on their screens. They share grainy videos of protesters marching, chanting — and in many cases, being chased by security trucks. Sometimes they’re hauled onto them and beaten. And sometimes, protesters are shot down.

Haifaa says she was amazed that people would still take to the streets the day after facing violence. She would grab her phone after watching a protest video and run to share what she’d seen with her friends.

“... I explain to them that this is my home. These are my people. And I should be proud of them. They walk the streets and they ask for freedom, and they fear nothing!”

“And I would say, ‘Look what my people do!’” she says. “And I explain to them that this is my home. These are my people. And I should be proud of them. They walk the streets and they ask for freedom, and they fear nothing!”

The events are changing the way Sudanese American teens like her relate to Sudan, and how they identify themselves in the US. For example, prior to the protests, Haifaa said, “there’s nothing to brag about” when it comes to Sudan, and she used to identify herself as black or African American.

“But throughout this revolution …, a lot of us have been saying, ‘No, look, we are Sudanese people!’ And we're coming out of our shells,” she says. “I feel like my generation is bringing attention that you can be Sudanese, and you can be proud of that. And that sense of your people wanting freedom just makes you proud — and I just never felt that much pride before until now.”

For her generation, this is Sudan’s first popular uprising of their lifetime. Sudanese people revolted against military governments before, in 1964 and 1985 — stories the youth hear about from their family members. For their immigrant parents, history seems to be repeating itself. 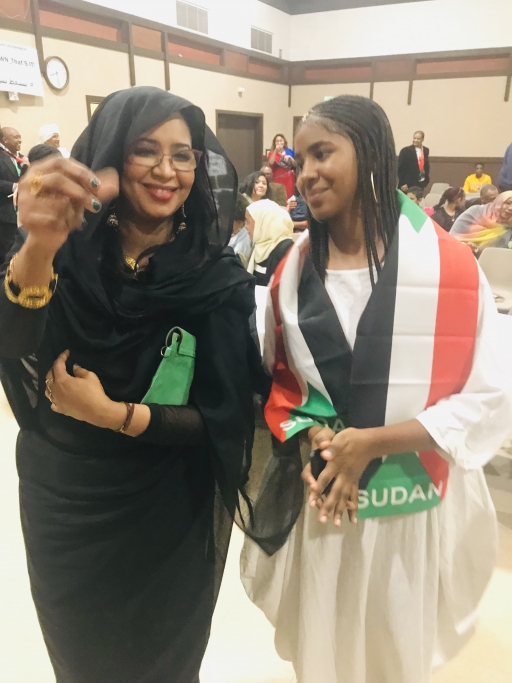 Haifaa Abushaiba dances with her mother at a Sudanese protest concert.

At a recent concert, Haifaa danced with her mom to the music of Sudanese singer Amal Alnur, who visited California to sing her famous 80s protest music. Haifaa says she now understands why her parents get emotional when they talk about Sudan or when they hear songs like Alnur’s — she feels it now, too.

Sent home from college in Sudan

While there’s a lot of excitement about the uprising, it has impacted some Sudanese American youth who chose to get involved on the ground in Sudan.

Until early late February, 22-year-old Saga and 19-year-old Alaa Hussein, who grew up in California, had been college students at University of Medical Sciences and Technology in Sudan’s capital, Khartoum. Then the protests began. The university made international headlines last month when it was swarmed by government security agents chasing student strikers. They tear gassed classrooms and beat students. A video depicting it went viral.

“‘I would try to make my mom not nervous and not scared,” Saga says of daily calls home. “So I'm like, ‘Oh Mom, there's nothing,’ you know.”

But the sounds of gunshots and teargas firing would interrupt their calls. Saga and Alaa’s parents made them come home to the US immediately. The young women have applied to a school in Dubai to continue their studies.

After their mother, Fatima, watched the attack video, she went on Facebook and posted an appeal: “We sent our children to our country, our home, thinking they would be safe!  We call on parents to remove their kids from this university,” she wrote.

“At some point, this is going to be our independence day. ... It's going to be getting [out] from under the tyrant, and this is gonna be a big day when it happens. So I do want to be a part of it. But at the same time, when I go on social media and I see videos, I'm scared to go back.”

“At some point, this is going to be our independence day,” she says. “It's going to be getting [out] from under the tyrant, and this is gonna be a big day when it happens. So I do want to be a part of it. But at the same time, when I go on social media and I see videos, I'm scared to go back.”

The uprising has hit close to home for 18-year-old Shabaaz, too. His mother, an American citizen, was arrested while protesting in Sudan and held in a government-run detention facility for a week and eventually released.

“It’s hella inspirational,” says Shabaaz, who used a pseudonym not to jeopardize his mother’s safety. “Of course I’m worried and concerned, but I know my mom’s a strong woman."

And, he says, it’s made him look deeper at his connection to Sudan and his family.

“I think we’re bridging [the generation gap] through this revolution. Previously, I was lacking a sense of community and identity and purpose. It just brought a lot of meaning.”

“We grew up in America, and there’s this disconnect between generations culturally, and this generation gap,” he says. “I think we’re bridging that through this revolution. Previously, I was lacking a sense of community and identity and purpose. It just brought a lot of meaning.”

As for Saga and Alaa Hussein’s mom, Fatima, she says she’s glad her girls are safe. She says they returned from Sudan strong, with revolution inside them, wanting to stand up for their fellow Sudanese.

But next time, she’ll be with them as they all prepare for the next big protest March 30, right here at home in San Francisco.