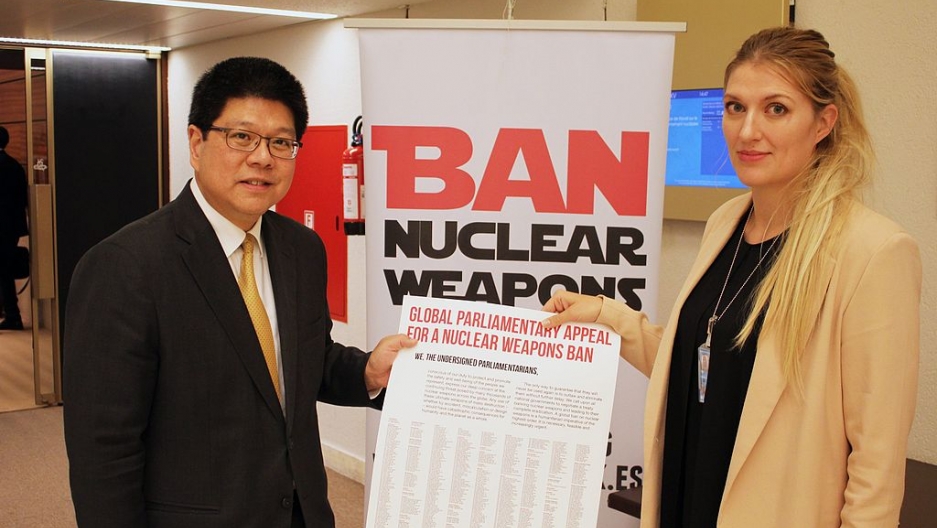 Ambassador Thani Thongphakdi of Thailand, the chair of a UN working group on nuclear disarmament, accepts a global parliamentary appeal from Beatrice Fihn, executive director of the International Campaign to Abolish Nuclear Weapons, in Geneva, May 3, 2016.

The “Doomsday Clock” is ticking ever closer to midnight —  two minutes before, according to the Bulletin of the Atomic Scientists.

Both the United States and Russia have withdrawn from the Intermediate-Range Nuclear Forces Treaty. The second US-North Korea summit ended with President Donald Trump saying, “sometimes you have to walk.” And Pakistan and India, two nuclear-armed powers, recently backstepped from the brink of war.

So it’s a good time for a nuclear ban treaty, advocates say.

The United Nations’ Treaty on the Prohibition of Nuclear Weapons — also known as the Ban Treaty —  could become the first new major legal move toward disarmament in more than 20 years. The text pledges signatories both not to possess nuclear weapons, and also not to “assist, encourage or induce” other states to do so.

The treaty is the first to ban "possession, transfer, use and threat of use of nuclear weapons, thereby closing the legal gap on the prohibition of all classes of weapons of mass destruction," according to the Toda Peace Institute.

The idea is to build international moral consensus against nuclear weapon possession or threats to use them — even to deter attacks.

The idea is to build international moral consensus against nuclear weapon possession or threats to use them — even to deter attacks.

But critics say its verification protocols — used to check that nations are cutting back on nuclear weapons possession and construction — are weak. The government of Japan, the only country to suffer atomic attacks, opposes the Ban Treaty, saying it doesn’t adequately address the reality of nuclear threats. Critics also say the treaty could cause havoc with established nuclear treaties and interfere with security cooperation with NATO.

Since it opened for signatures in July 2017, 70 countries have signed and 22 have ratified. It needs 28 more to reach 50 — the number of countries necessary to bring it into effect.

“We are expecting a couple more in the coming few weeks or months ..." said Céline Nahory, the lead treaty campaigner from the Geneva-based International Campaign to Abolish Nuclear Weapons.

“Nuclear weapons are not props in a political game. ... They're aiming at things. They are ready to wipe out hundreds of thousands, maybe millions of civilians. It's not a game, it's an urgent threat to our security.”

“Nuclear weapons are not props in a political game,” ICAN’s Beatrice Fihn said. “They're aiming at things. They are ready to wipe out hundreds of thousands, maybe millions of civilians. It's not a game, it's an urgent threat to our security.”

Related: How Trump’s exit from a Cold War-era treaty could trigger a 3-way arms race

ICAN pushed for this treaty for a decade and even won the Nobel Peace Prize in October 2017 for it. Nahory and Fihn spend their days encouraging MPs and foreign ministry officials to get on board with the Ban.

The genesis of the Ban Treaty

The basis of the Ban Treaty is the Non-proliferation Treaty — NPT — which was signed in 1968 and went into effect in 1970. 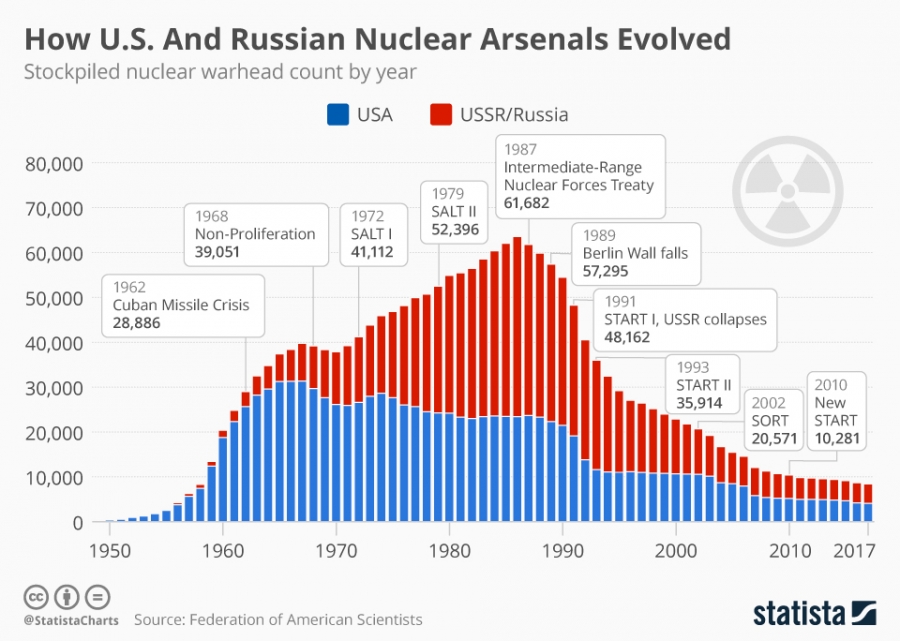 “The NPT is really something that needs to be protected, and it’s been sacred."

“The NPT is really something that needs to be protected, and it’s been sacred,” said Heather Williams, a nuclear expert at King’s College London and adviser to the UK House of Lords International Relations Committee.

The whole world — with the exception of India, Pakistan, Israel, South Sudan, and (after 2003) North Korea — is part of it.

Nuclear nations — the United States, Russia, the United Kingdom, France, and China — agree through the NPT to pursue nuclear disarmament and share peaceful nuclear energy technology. Non-nuclear nations agree not to acquire nuclear weapons. All of these nations accept the International Atomic Energy Agency’s (IAEA) to keep them in check with compliance verification rules, who report to the UN General.

Every five years, a review at UN headquarters assesses the likelihood of reaching total disarmament with the goal of avoiding “catastrophic humanitarian consequences of any use of nuclear weapons.”

The Humanitarian Initiative, a series of conferences examining the potential horror of nuclear detonation since 2010, is largely responsible for generating the momentum for the Ban Treaty movement. Its membership has grown from 16 countries in 2010 to 159 by 2014, with meetings in Oslo, Norway, Nayarit, Mexico and Vienna, Austria.

“I’d been working on nuclear issues for a decade before Oslo, and I never really talked about the humanitarian side to nuclear weapons before,” Williams said.

By the Vienna Conference in December 2014, the Humanitarian Initiative gave way to the Ban Treaty.

For governments like Austria, Mexico, and South Africa, it was a way of saying to the nuclear possessors: “You aren’t doing enough in existing disarmament forums, we’re going to find a way to put pressure on you,” Williams said.

Building bridges between Ban and NPT

The Ban Treaty was designed to ensure that nuclear countries fulfill NPT promises, but critics of the treaty say it’s more like a disruption. Japan, for example, prefers NPT “as the cornerstone of the international nuclear disarmament and nonproliferation regime,” The Diplomat reported.

NPT regulations are implemented by the IAEA — an independent international organization founded in 1957 that offer specific protocols for verification compliance — whereas the Ban Treaty is vague on verification, stating it will identify authorities to deal with those matters ... later.

The treaty “is … weaker on verification than the state of the art standard in the IAEA,”  Ambassador Lars-Erik Lundin, a Swedish diplomat, told The World. As the former EU lead representative to the IAEA, Lundin is an outspoken critic.

The Ban Treaty “does not link up legally to the NPT regime, binding the P5 to pursue nuclear negotiations in good faith,” Lundin said. (P5 stands for the five permanent members of the United Nations Security Council.)

The treaty lacks basic details as to how verifications will actually work.

“There are relatively quick fixes to many of these problems, proposed by Sweden and others during the negotiations, which were rejected,” Lundin complains. Verification and its relationship to the NPT “need to be reconsidered in order for the treaty to gain real international recognition and respect,” Lundin argued.

Without a bridge to the NPT to make use of all its verification provisions, critics fear the Ban treaty creates an alternative forum — with much weaker standards. But Patricia Lewis, a nuclear physicist and arms control expert, says there are “quite a few bridge-building projects” trying to help non-Ban Treaty states accommodate the Ban Treaty within the NPT.

Even inside the Trump administration, Christopher Ford, assistant secretary of state for nonproliferation, has suggested an expanded dialogue within the NPT about “creating the environment” for disarmament, including governments and civil society.

It’s a small tweak, but one which might help create the conditions for denuclearization to include verification (building trust) compliance (punishment for violations) and deterrence (nuclear umbrella agreements).

The Ban Treaty could alter relationships between its members and nuclear states in terms of peacekeeping and training cooperation between NATO and non-NATO members.

The Ban Treaty could alter relationships between its members and nuclear states in terms of peacekeeping and training cooperation between NATO and non-NATO members.

That’s because some Ban Treaty signatories like Ireland and Austria also participate in the Partnership for Peace program, or PfP, designed in 1994 to build trust between NATO states and the former Soviet Union.

If a NATO exercise included PfP members with nuclear weapons, “that could cause difficulties as the treaty prohibits participating in any nuclear weapon activities. They would have to withdraw,” Lewis said.

Non-nuclear NATO members like Belgium, Canada, and Germany would need to work out exactly how much relations would change with Ireland and Austria.

Take, for example, what happened between the US and New Zealand. The US has denuclearized most of its surface fleets, but the US neither confirms nor denies if particular naval vessels carry nuclear weapons. A ship could transport a warhead at sea on occasion. This does not work for places like New Zealand, that declared itself a nuclear-free zone in 1987. As a result, the US naval visits ceased for 30 years, as did New Zealand’s active membership in ANZUS (Australia/New Zealand/US) treaty system.

The Ban Treaty could have similar — broader — effects. But Japan and Norway “ban these visits already and everyone copes admirably,” Lewis said.

For the US, commercial as well as security relations are a concern once it comes into effect. Last year, at a disarmament conference in Reykjavik, Iceland, Ford said the nuclear and nuclear-umbrella states could face “a future of endless political and litigious civil society harassment."

If countries like Sweden sign on to the Ban, they could also face constraints on civilian research and development in technologies if their projects are seen as “dual use” military applications, Lundin adds.

Despite the Ban Treaty’s complexities, it seems likely that the 49 nations who signed will ratify soon.

The foreign ministries of Indonesia, Brazil, Liechtenstein, Kazakhstan, and Ireland each told The World that their countries are taking measures to ratify the treaty soon. Swedish arms control expert Andreas Persbo said he expects the treaty to go into effect "early next year.”

Kazakhstan voluntarily gave up “the fourth largest nuclear arsenal in the world” (transferring 1,410 Soviet-era weapons to Russia by 1994), and President Nursultan Nazarbayev is calling for “a world free of nuclear weapons by [the United Nation’s 100th anniversary in] 2045,” says Aigerim Seisembayeva, third secretary in its embassy.