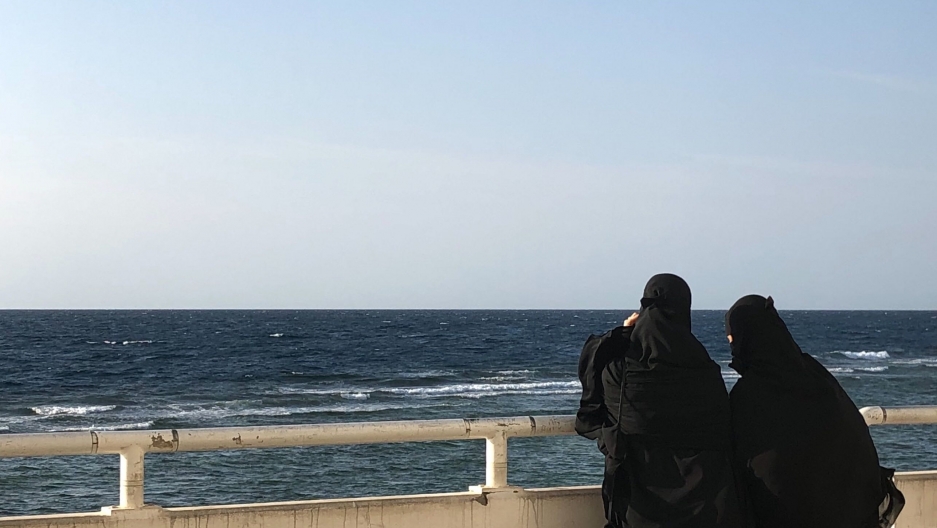 Women at the Corniche in Jeddah, Saudi Arabia.

She wrote the note on the plane.

“I want asylum,” it read. “My family doesn’t know. Plz protect me from them.”

Dona, then 18, had made up her mind. She was going to make a run for it during the layover in London. She was traveling with her mother and sister, heading back to Saudi Arabia after a trip to the US. As the plane landed, Dona shoved the piece of paper in her passport. She planned to hand it to the agent at passport control. But once inside the airport, she had another idea.

“I told my family, ‘I want to go to the toilet',” recalled Dona, who asked that her full name not be used for security reasons. “My family went inside, and when I saw them go inside, I just [went] out.”

Dona walked up to airport staff and tried to explain that she wanted asylum. And that she didn’t want her family to know. At first, she says, the agent didn’t understand.

“I forget everything. I forget how to speak. My English wasn’t great then,” Dona said. That’s why she had the note: So that she could get her point across as quickly as possible.

“When she saw me crying and I told her my family would come now, she talked to another airport staff and they took me to a smaller room and talk to the police,” she said. Meanwhile, Dona’s mother and sister kept calling and sending frantic messages. She didn’t respond. Dona was gone. 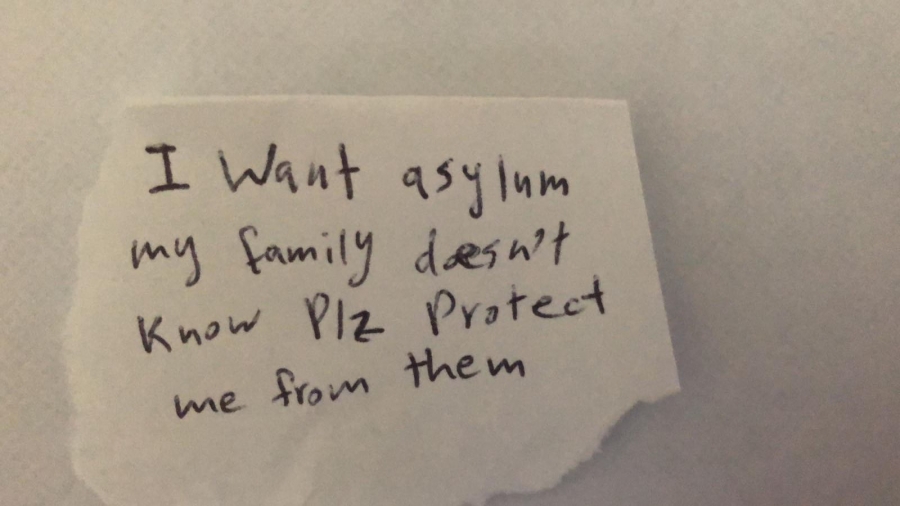 On a layover in London, Dona, then 18, gave this note to airport staff. "I want asylum. My family doesn’t know. Plz protect me from them.”

Women from Saudi Arabia and other Gulf countries are increasingly finding ways to run away from abusive families. Some flee while on vacation abroad. Others turn to online forums to connect with people who can help them plan their escape.

Airport transit areas have become the settings in which their dramatic escapes are playing out — often unbeknownst to other travelers. The world finds out about some of these women only because they post about their experiences online.

Stories that got the world’s attention

Last September, two Saudi sisters fled while on a family vacation in Sri Lanka. The sisters, who go by the names Reem and Rawana, planned to go to Australia and seek asylum. They were stopped in the transit area of Hong Kong airport and ended up on the run from Saudi authorities whom they accused of attempting to kidnap them and return them to their family.

In January, 19-year-old Rahaf Mohammed, another Saudi citizen, fled the kingdom, but was stopped at Bangkok airport in Thailand. She barricaded herself in a hotel room and refused to leave until she met with human rights officials and demanded to be granted asylum in Australia. Mohammed said she would be killed if she was returned to her family. So she took to Twitter for help.

“Because I got nothing to lose,” she tweeted, “I’m going now to share my real name and my all information.”

Mohammed’s messages and videos made the rounds on social media. After a 48-hour ordeal, she was granted asylum in Canada. 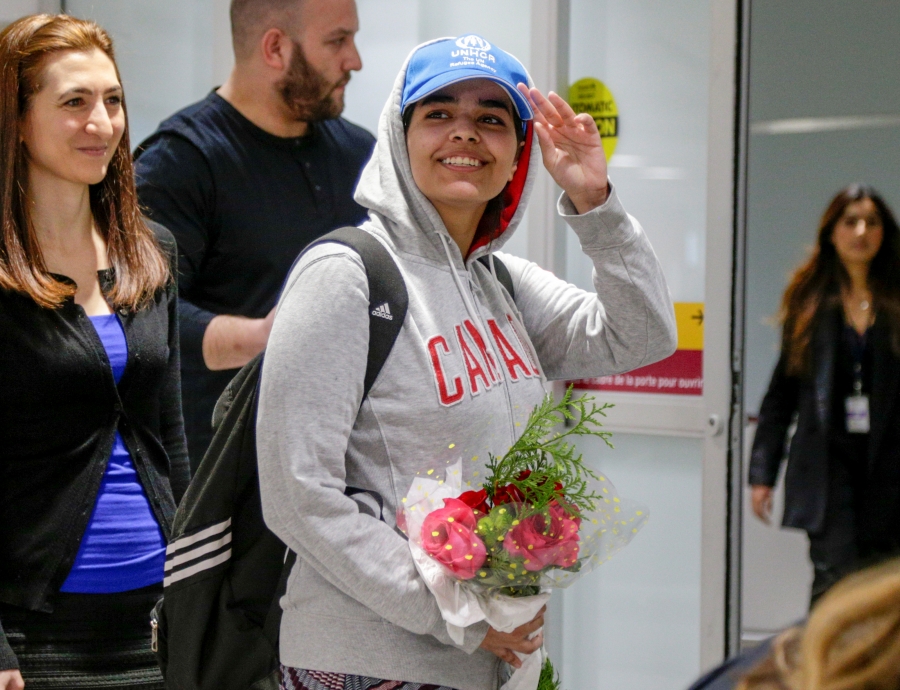 A rise in the number of Saudi asylum-seekers

Taleb al-Abdulmohsen runs an online forum that has become the go-to place for Saudis looking to escape. Abdulmohsen, himself, left Saudi Arabia and sought asylum in Germany in 2016.

“There is a huge number of Saudi people planning to escape from Saudi Arabia and seek asylum all over the world,” he said. “And all of this happened in the last couple of years because the concept is spreading, especially among the young people.”

Abdulmohsen says he gets about 40 messages a day — mostly from women who want to find a way out.

“People ask me about [the] asylum process, all aspects of asylum, but most importantly, they ask me how they can escape from Saudi Arabia.”

The World spoke with several women who said they escaped Saudi Arabia or the United Arab Emirates because they wanted to get away from abusive fathers or brothers. One woman who requested anonymity said she had been abused by her father since she was 12 years old. She said he would lock her in her room for days. The abuse went on consistently for seven years. She fled when she was 20 years old.

Anoud al-Ali, 21, who fled the United Arab Emirates, said her older brother abused her physically and mentally, while her stepbrother abused her sexually. She said she once called the police “but they didn’t do anything.”

Those who were not physically abused, like Dona, said they faced severe restrictions on the basic rights such as studying, socializing and travel.

Adam Coogle, with Human Rights Watch, says Saudi women find themselves having to escape instead of just packing their bags and leaving because of what’s known as male guardianship laws.

“Every Saudi woman must have a male guardian who has to make critical decisions on their behalf.” Without their guardian's permission, “women don’t have the right to get a passport, travel outside the country or get married.”

“Every Saudi woman must have a male guardian who has to make critical decisions on their behalf,” Coogle said. Without their guardian's permission, “women don’t have the right to get a passport, travel outside the country or get married.”

A father, brother, uncle or a son can act as a male guardian. And if he is not willing to allow the woman to travel, she is stuck. A few years ago, the Saudi government introduced an app called Absher, which roughly translates to “yes sir.” The app helps men keep track of the movements of women over whom they have guardianship.

In February, Apple and Google found themselves at the center of a controversy over the app. Human rights groups, as well as American politicians, demanded that the technology giants stop offering the app in Saudi Arabia. But some Saudi women argued that the app helps women who plan to leave the country.

“It’s easy to hack or access Absher and issue yourself a permit under your guardian’s name and just run away,” said a woman in Saudi Arabia who asked to remain anonymous.

Before the app was available, the woman said, the process of getting a permit to leave the country was extremely cumbersome. She said her guardian had to go to the Ministry of Interior in person and ask for a travel permit for her.

“They would print out a yellow page, and it was stamped. I’d have to submit the yellow page at the border,” she said.

That’s why the woman thinks the app could partly be behind the rise in the number of Saudi women who are escaping: It has made crossing the border simpler.

Taleb al-Abdulmohsen, the man behind the forum that helps Saudis escape, says even though his website is blocked in Saudi Arabia, people manage to access it using virtual private networks. The content is crowdsourced, but he says from time to time, women contact him directly and ask how they can escape. He tells them what they need.

“I tell them they need a passport, an electronic permission from the male guardian; I tell them about what they need to be allowed to enter [the] asylum country. The last thing they need is an air ticket and a good plan. A good escape plan.”

Sometimes, a good escape plan can take years to map out. Anoud al-Ali, the woman who fled UAE, says she started plotting her escape when she was 16 years old.

“I started saving money at that point up until the night I escaped. I saved up nearly $3,500 in two years,” she said. Ali says for two years, she became obsessed with leaving Dubai, where she lived with her family.

“I used to stay up late at night to know when everyone sleeps; when does everyone wake up. I felt like 3 a.m. is the best thing I could do.”

Ali didn’t need a permit from her male guardian, like women in Saudi Arabia do, but she had to find a way to get hold of her passport. Her mother always kept it in a drawer in her bedroom.

“I stole it,” she said. “I just found it in my mom’s wardrobe, and I took it. And no one noticed. I went to my room immediately.”

A few days later, she booked a flight, stayed up until 3 a.m. and called an Uber.

“I had my sister sleeping with me. So, I had to slowly take out my things, wear my clothes and get out of the house. And it was dark.”

The ride to the airport was short, about 10 minutes. It was a warm, August night and on the way, Ali thought about what would happen if her brother found out. He would kill her, she says. But she wasn’t scared.

“It wasn’t terrifying. I love adventure. I’m very adventurous. All I had in mind was either freedom or death.”

“It wasn’t terrifying. I love adventure. I’m very adventurous. All I had in mind was either freedom or death.”

But there have been instances when escape attempts were unsuccessful. Two years ago, Dina Ali Lasloom, an English teacher from Riyadh, ran away from her home in Saudi Arabia. She was stopped at Manila airport in the Philippines. Online videos show her screaming and begging airport officials to let her stay. But they decided to return her to her family.

Witnesses told Human Rights Watch that she was forced on a plane back to Saudi Arabia. Her mouth, hands and feet were duct-taped. There’s been no word from Lasloom since.

“Of the women who have been returned that we know about, some have faced confiscation of mobile phones, forced confinement, limiting of contact. In more circumstances, they can face potential violence or even honor-related violence. Or so-called honor killings,” he said.

Coogle says while shelters and domestic abuse hotlines exist in these countries, women are often reluctant to report abuse.

“Women can generally be reticent to go to the police with these accusations because [the police] generally will intervene, but attempt to reconcile. And oftentimes, what they do is they get male guardians, or abusers I should say, to just sign a statement saying they won’t do it again.”

Still, the potentially grave consequences of running away don’t stop women from attempting to do so. Ali, who is now in France, says she’s happy she left. She is waiting to hear back on her asylum claim and she wants to study engineering — a field her brother refused to let her pursue.

Dona, who ran away at Heathrow and is now 19, is still in the process of obtaining asylum in the UK.

“I am living a normal life now, like any other person in the world. So, of course, I’m so happy with that,” she said.

Dona wants to study too — maybe law, but she is not sure yet. As for what she misses from her life in Saudi Arabia? Her mom, she says. And her gray cat, Tutu.