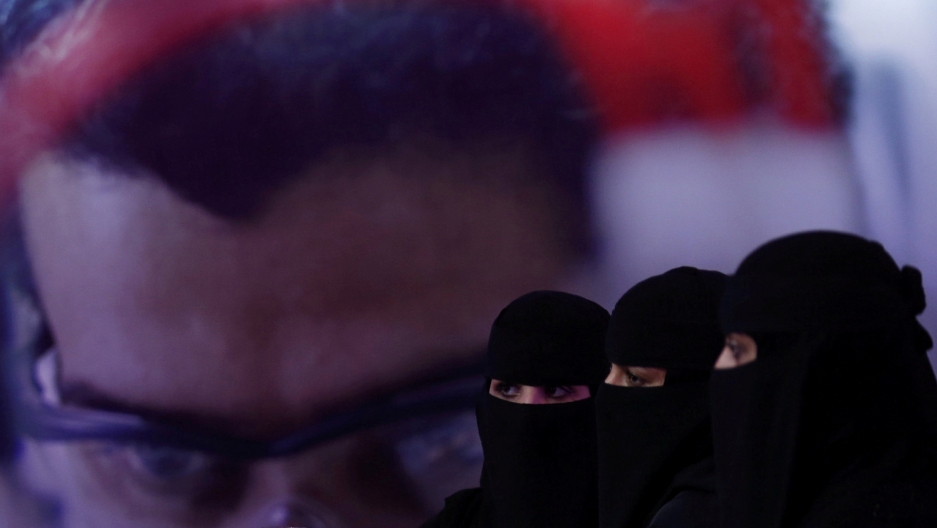 Saudi job seekers talk to a company representative at Glowork Women' s Career Fair in Riyadh, Saudi Arabia, Oct. 2, 2018. Absher, the app that allows Saudi men and "guardians" use to track and control all movements of the women whom they have guardianship over, may actually help women escape the country.

Some Saudi women say an app that’s landed Google and Apple at the center of controversy can actually help women who want to escape the country. The app in question allows Saudi men to track and restrict the movements and travel of women over whom they have guardianship.

Under Saudi Arabia's strict guardianship laws, all women are assigned a guardian — a husband, a son, a brother — and need to get their permission to do things like travel, work and get married. In 2015, the Saudi government launched an app called Abhser — which roughly translates to “yes sir” — that allows men to grant some of those permissions through clicks and swipes. 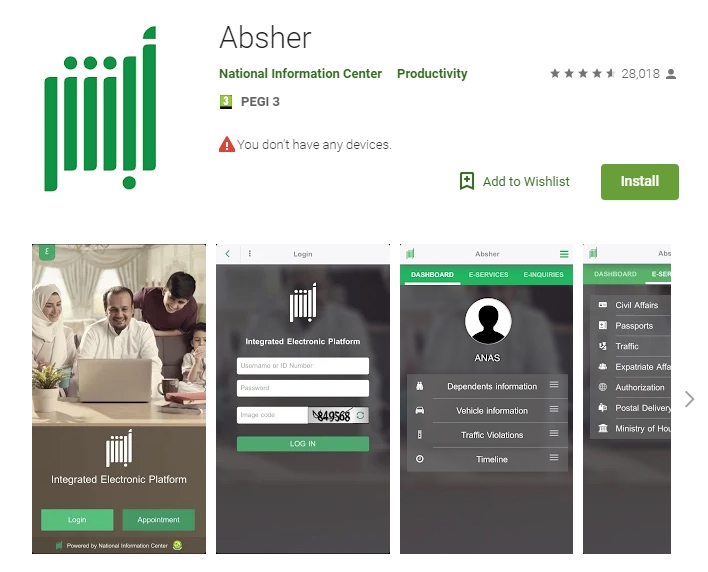 A screenshot of the controversial Absher app in the Google Play store.

“If, today, my guardian decides ‘I don’t want her to travel anymore,’ he can just [do that] with a swipe, and when I get to the border they’ll turn me back,” said Raneen Bukhari, a 32-year-old curator and events producer who lives in Jubail in Saudi Arabia’s Eastern Province.

Bukhari says her experience with the app has been largely positive. Her husband, who is her guardian, allows her use the app to approve her own travel arrangements. But she acknowledges other women in Saudi Arabia are facing vastly different circumstances.

Human rights groups, including Amnesty International, are among those who have criticized Apple and Google for making the app available through the Apple app store and Google Play store. On Monday, Oregon Democratic Senator Ron Wyden sent a strongly worded letter to the companies’ top executives, asking them “immediately remove” the app.

“It is hardly news that the Saudi monarchy seeks to restrict and repress Saudi women, but American companies should not enable or facilitate the Saudi government's patriarchy,” Sen. Wyden wrote. “By permitting the app in your respective stores, your companies are making it easier for Saudi men to control their family members from the convenience of their smartphones and restrict their movement. This flies in the face of the type of society you both claim to support and defend.”

It is unconscionable that @Google and @Apple are making it easier to track women and control when and how they travel. These companies shouldn’t enable these abusive practices against women in Saudi Arabia. https://t.co/RDhZoTiQnP

Some women in Saudi Arabia, though, say the app can also be used to do the opposite of what critics have been saying.

“A lot of women who want to run away have been able to use it to run away,” said a woman within Saudi Arabia who asked to remain anonymous. While there is a web version of the portal, the woman said the password and security controls are stricter and she says that breaking in is a “much harder process […] whereas on the app they [women] sneak the phone away from their guardians, they can access the app and … get the hell out.”

The New York Times reported in January that one woman was able to flee the kingdom for Australia “using her father’s phone to access Absher and give herself permission to travel, allowing her to leave the country undetected.”

Saudi’s Ministry of Interior and Ministry of Foreign Affairs, the government agency behind the Absher app, did not immediately respond to request for comment.

It’s still unclear how the two American tech giants plan to move forward. When asked about the Absher app during an interview with NPR on Monday, Apple CEO Tim Cook said, “I haven’t heard of it” but promised to “take a look at it.” A Google spokesperson “confirmed that the company is assessing the app to determine if it is in accordance with its policies,” according to the New York Times. Apple and Google did not respond to The World’s requests for comment.

The Absher app controversy is the latest in a string of issues surrounding tech giants and their operations abroad. Google recently came under a lot of scrutiny when it was revealed that the tech giant was working on a censored version of its search engine for the Chinese market.

Bukhari says she hopes Absher remains available for Saudis. She says Saudis have come to rely on the app — which has broader functions as an online government portal — to file for passport renewals, vehicle registrations, and other paperwork.

“It’s become a very important tool that people use,” she said. “It’s definitely a form of control but it's a symptom and not the problem,” Bukhari said when asked about the app and the debate around it, adding that getting rid of the app will not eliminate what she sees as the underlying problem: Saudi’s guardianship laws.

“It's become part of our culture and a part of our tradition and part of our normalcy. But I don't think it's necessary anymore because women do have a lot more freedoms than before. They're driving they're traveling they're working,” she said, adding that guardianship laws and the travel restrictions women face are “unnecessary.”

“If you want to stay you're going to stay in if you want to leave you’re gonna figure out a way to leave, as we’ve seen,” she said.

Editor’s note: PRI is the recipient of funding from the Google News Initiative funding to enable publishers to build for the next generation of audio news experiences — those that are a part of virtual assistants and smart speakers and displays.