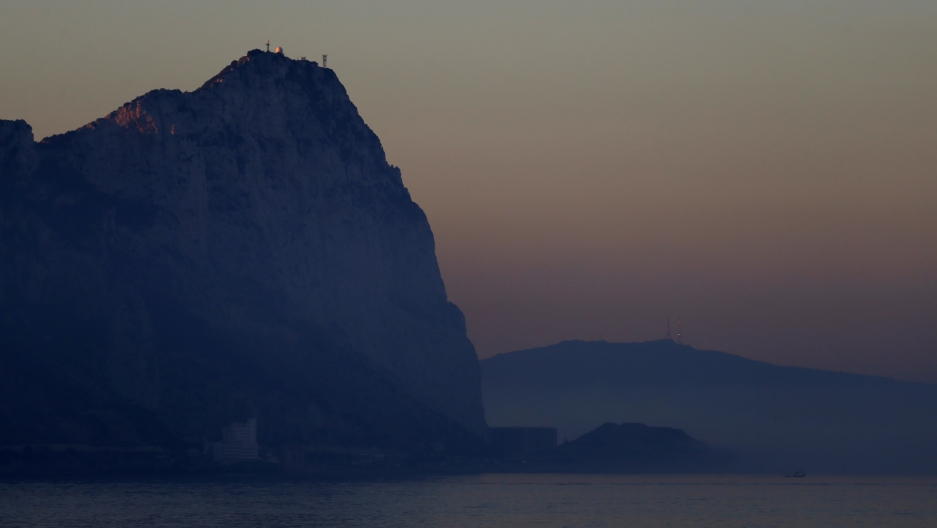 The Rock of the British overseas territory of Gibraltar is seen from a ship off Gibraltar, Dec. 6, 2018.

As the date of Britain’s departure from the European Union draws near, you might be forgiven for thinking that the future of UK-EU relations after Brexit hangs on only one thing: resolving the question of what to do with the Irish border. Yet just over the horizon lies a much more serious threat, one that has the potential to cause far greater and more lasting damage.

This is the question of Gibraltar, which encapsulates many of the concerns that will haunt UK-EU relations once Brexit has taken place. It is one of the rare examples of a land border between Britain and the EU, and a site of extensive cross-border movement. Every day, roughly 10,000 Spanish workers travel to Gibraltar (population 33,000) to work, mainly from the Spanish town of La Línea de la Concepción.

Gibraltar is also an example of how tightly interdependent Britain is with certain EU countries. Britain is one of Spain’s largest economic partners. Gibraltar is a hub for the finance and insurance industries, online gambling and gaming.

Gibraltar is also an example of how tightly interdependent Britain is with certain EU countries. Britain is one of Spain’s largest economic partners. Gibraltar is a hub for the finance and insurance industries, online gambling and gaming.

At the same time, Gibraltar offers a glimpse of the pressure points in future UK-EU relations. Since Gibraltar opted out of the EU customs union in 1972, it has set much lower taxes than its European neighbor. It has, for example, a corporate tax rate of 10 percent, compared to Spain’s 25 percent. As a result, Spain has long regarded Gibraltar as a de facto tax haven, resenting its parasitical existence on its southern border. Gibraltar is, nevertheless, part of the European single market.

Gibraltar shows the problems that will arise if Britain leaves the EU on terms that include a hard UK-EU border.

Above all, Gibraltar shows the problems that will arise if Britain leaves the EU on terms that include a hard UK-EU border. The local Spanish province of Cádiz evidently benefits from cross-border trade and traffic, even under the current controlled conditions. Meanwhile, Gibraltar itself relies on Spanish workers, money, goods, and services through eased access to the single market. Imposing a hard border would certainly hurt Spain, but Gibraltar’s economy would suffer unimaginable, irreparable damage.

From the start of the Brexit negotiations, the Gibraltar question has always remained separate from the main UK-EU discussions. Instead, it has been addressed through bilateral negotiations between Britain and Spain — excluding the government of Gibraltar at Spain’s insistence. When it comes to deciding what happens to Gibraltar, these bilateral negotiations take absolute precedence over the main UK-EU negotiations. In the European Council’s guidelines for the conduct of Brexit negotiations, one of the core principles recognized that both the UK and Spain would have to agree on applying any future UK-EU arrangements to Gibraltar as well.

To reflect Gibraltar’s special status, it has been made the subject of its own protocol in the Brexit withdrawal agreement. But unlike the equivalent protocol on Northern Ireland, which outlines in detail which laws and provisions will apply after Brexit, the protocol on Gibraltar is relatively sparse. It simply acknowledges the economic benefits free movement of people has brought to Gibraltar and Spain and provides for a joint UK-Spanish coordinating committee to discuss some key issues for Gibraltar’s future. These include employment conditions, air transport law, tax and fraud, smuggling and money laundering, waste management, scientific research, fishing and policing.

And unlike the Northern Ireland protocol, which will largely only come into effect after the two-year Brexit transition period ends, the protocol on Gibraltar is only designed to last until that point. That means the future UK-Spain-Gibraltar relationship is still entirely unsettled. It will, therefore, have to form a prominent part of the next stage of negotiations.

The view from Spain

On the Gibraltar question, the Spanish position has remained unchanged since before the referendum. For Gibraltar to have access to the European single market, Spain must be given co-sovereignty, at least for a transitional period. The British position is that the whole UK, including Gibraltar, must exit the EU, without any encroachments on British sovereignty. That said, while the government currently opposes staying in the single market, this could hardly be described as a settled position given the current state of the debate in the UK.

Meanwhile, the Gibraltarian view is complex. Its population overwhelmingly voted Remain in 2016 but has also supported continued attachment to Britain, voting to reject complete or partial Spanish sovereignty in 1967 and 2002. At the same time, the government of Gibraltar is empowered under the territory’s 2006 Constitution to veto any changes in its sovereignty. That might seem like an extreme move but it is not an unlikely outcome, given that the government of Gibraltar may conclude that this is the only leverage it has over the UK-Spanish negotiations.

The recent furor over Spain’s attempt to redesignate Gibraltar as a “colony” in EU legislation on visa-free travel after Brexit was merely the first shot across Britain’s bow.

As things stand, Spain is due to reap vast strategic benefits from Brexit on the Gibraltar question — benefits that will take effect as soon as the UK formally leaves the EU on March 29. Up to now, since both Britain and Spain were members of the EU, the EU was forced to be a neutral arbiter whenever Spain escalated tensions over Gibraltar, such as by increasing border checks and queues. After Brexit, however, this restriction (and the UK’s leverage) will disappear, and the EU will be obliged to take the Spanish side. It is hard to see this having any other result than emboldening Spain to entrench around its red lines. In this light, the recent furor over Spain’s attempt to redesignate Gibraltar as a “colony” in EU legislation on visa-free travel after Brexit was merely the first shot across Britain’s bow.

In light of the diametrically opposed positions of Britain, Spain, and Gibraltar, the best arrangement would be to make the current UK-Spanish coordination committee a permanent fixture. This would enable the two sides to find a path toward strategic harmonization (which Spain desires) without the UK having to offer Spain co-sovereignty (which Gibraltar opposes).

Gibraltar could be given unique privileged access to the EU customs union and single market (which it needs) via a special protocol, in exchange for changes in its tax arrangements that partly eliminate its extreme tax haven status (which Spain demands). From the British perspective, this would in effect turn Gibraltar into a de facto British toehold within the single market. This could potentially offer a neat solution that allows the main body of the UK to achieve a meaningful Brexit while allowing British businesses to maintain European access and benefits essentially equivalent to continued EU membership.

The Gibraltar question holds the key to Britain’s future outside the EU.

In the Brexit negotiations so far, the future of Gibraltar has remained essentially a quiet unknown. That will change when the UK leaves and the negotiating stage begins. Ultimately, it may not be the Irish border problem that proves thorniest for Brexit. Instead, it is Gibraltar, and the questions hanging over its future border with either its British sovereign or its Spanish neighbor, that holds the key to Britain’s future outside the EU.

Marius S. Ostrowski is an examination fellow in politics at All Souls College at the University of Oxford.