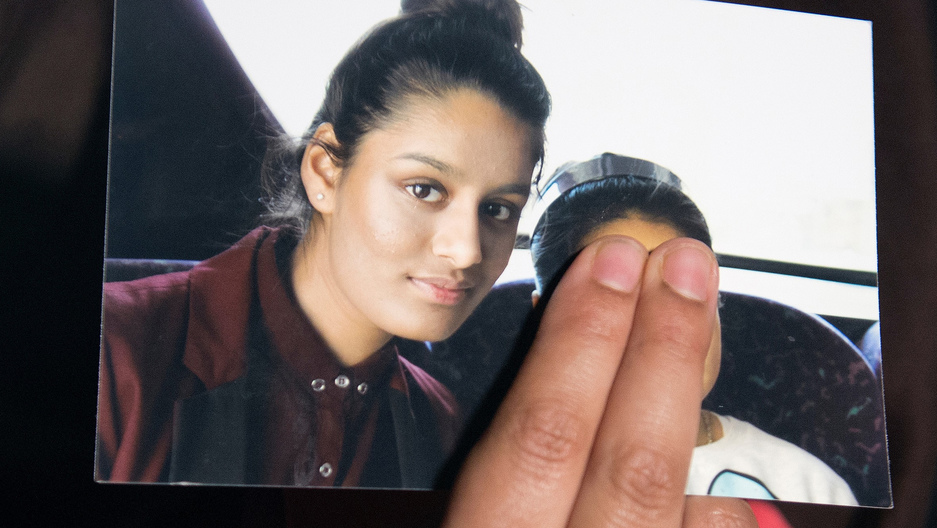 Renu Begum, sister of British teenager Shamima Begum who left the UK to join ISIS, holds a photo of her sister as she makes an appeal for Shamima to return home. Shamima Begum is one of several former ISIS recruits who is asking to return to their home country.

When an American flees to join ISIS, should they be allowed to come home?

Hoda Muthana left Alabama to join ISIS in Syria after being radicalized online. Now — after the collapse of the extremist group's stronghold in Syria — she's in a refugee camp and wants to return home.

But US President Donald Trump made it pretty clear he doesn't want her back in the country.

I have instructed Secretary of State Mike Pompeo, and he fully agrees, not to allow Hoda Muthana back into the Country!

In a statement, Secretary of State Mike Pompeo said Muthana was never a US citizen to begin with, though her family and lawyer maintain she is.

"She does not have any legal basis, no valid US passport, no right to a passport, nor any visa to travel to the United States," Pompeo said, adding, "We continue to strongly advise all US citizens not to travel to Syria."

Jesse Morton was a former jihadi recruiter who served time in jail but was allowed to return to the US. Now, he runs the group "Parallel Networks" to rehabilitate other radicalized individuals. Morton spoke with The World's Carol Hills about whether or not Hoda Muthana should be forgiven by the US.

Carol Hills: Jesse, what do you think of Hoda Muthana's case? Should she be allowed to come back to Alabama?

Jesse Morton: I do actually believe that she should be allowed to return to the state. I think this is actually an opportunity to prove that rehabilitation and reintegration of people that went on to become foreign fighters with ISIS can sometimes be the most credible voices in deterring others. If she was able to return to the States and receive the proper intervention services she's in need of, she in fact could become a voice similar to the one that I have become.

What year was this that you became radicalized and got involved?

So radicalization is a process, it's not an event. I converted in early 2000 and I think that the onset of my radicalization came with 9/11, like many others. By 2003 I was a serious, committed preacher.

And your Muslim name was Younes Abdullah Mohammed. You created Revolution Muslim, and you [were] actively recruiting people. And your turnaround, your rejection of radical Islam, it didn't come on your own — you were arrested in 2011 in Morocco and brought back and convicted, and spent time in prison. Persuade Americans why you should have been given a second chance.

An individual affiliated with my website did post threats, clear direct threats, to [the writers of South Park] and then he got arrested trying to travel to Somalia to join al-Qaeda's outfit there. So I ran, knowing I would soon be arrested. But what happened when I went to Morocco was very important for us to understand what needs to occur here in the situation of these female cases that are coming up now. Because when I got to Morrocco, the Arab Spring broke out.

But the most important thing was that I was extracted from the network. I no longer had day-to day-contact, and the social-psychological forces that kept me going in regards to my extremism were removed. But really, my transition came in contact with an empathetic FBI agent who eradicated the black and white worldview that they were waging a war against Islam. I went on to turn and become an informant and to cooperate with the government. And since that time I've been working to repair some of the damage that I caused.

And you received a reduced prison sentence because of that cooperation, didn't you?

Let's go back to Hoda Muthana. Do you think she should face jail time too?

Absolutely. One hundred percent. And it should be a very lengthy sentence. I mean, the degree to which she acted is severe. However, there are mechanisms for rehabilitating her inside of prison and it's a very good opportunity for us to learn more about that. This is a female case where the roles that females play inside of jihadi movements actually decrease the risk for violence. And she won't have access in a federal prison to disseminate radical ideals ...

In what way do they decrease the likelihood of violence for women?

So, women play a very different role [in ISIS]. They are not allowed by the verdicts or the Fatwa of jihadi scholars to carry out attacks, unless they're in a situation where they're in defense, like if they're living in Raqqa and there's people approaching that are enemies of Islam, so to say. So the role that women plays is as mothers, in regard to the children that are been born under ISIS and in the refugee camps. But they are also radicalized in propaganda. The message that women send is that, "Men are weak and they're not acting. Look at me, I'm acting on behalf of the cause."

There have been multiple cases of women involved in extremist Islamic terror attacks. I mean, one that comes to mind is Tashfeen Malik — the woman in the husband and wife team who carried out the attack in December 2015 in San Bernardino, California. So, it seems like women do take part in these attacks.

It is true that you do have young people that are living on the periphery, like the case of Tashfeen Malik — who certainly did not coincide with what the ISIS would have considered permissible — and that is the case.

I think what's tough in these cases — there's also the case of the British woman Shamima Begum — neither of them sound terribly remorseful, to be brutally honest. I mean, the comments they're making are comments because they're suddenly in a very tough spot, particularly the case of Shamima Begum. I mean, there's not a lot of, "This was awful what I did. This is terrible." The expressions coming across are: "I really want to be forgiven. I really want to become a part of, either the UK or the US. I'm not scary." But it seems to be statements based on the predicament they're in now. How do you persuade either Britons or Americans that these individuals should be welcomed back or brought back even to face due process?

Well, they shouldn't be welcomed back and they should be treated as essentially enemies of the United States, which in fact they are. We do have to understand that they suffer, like anyone else, to fit in a war zone, from the trauma of war, and they've been heavily indoctrinated. They were indoctrinated before they left, but that's even worse now. That's not the concern here. The concern is risks for the American public. Do they pose a risk to commit an act of violence or is there any risk that they could, let's say, escape or anything like this? These are women. They might have very radical ideas. But still, it's an opportunity if we look at it in the right light. I know that that sounds a bit off-base. But the fact that these women are not going to pose as risk for violence, that they will receive an incredibly long prison term.

And the fact that, yes, they do continue to support an ideology that is heinous, they won't have an opportunity to express that ideology anymore. The benefits here outweigh the harms.