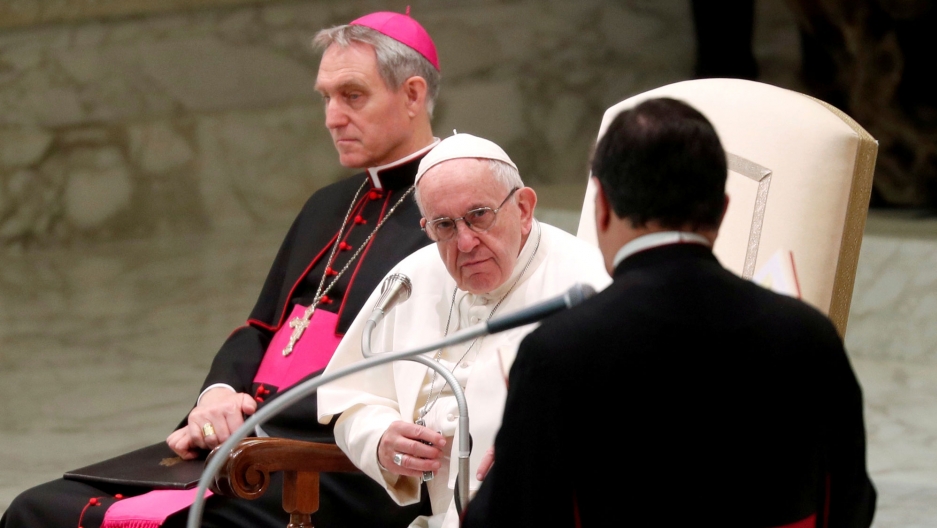 Countering skepticism from some survivors, Pope Francis promised that concrete actions against child sexual abuse by priests would result from a conference he opened on Thursday.

Francis convened Catholic leaders from around the world for the four-day meeting to address the scandal that has ravaged the Church's credibility in the United States — where it has paid billions of dollars in settlements — Ireland, Chile, Australia, and elsewhere over the last three decades.

"Faced with the scourge of sexual abuse committed by men of the Church against minors, I wanted to reach out to you," Francis told the assembled bishops and heads of religious orders, asking them to "listen to the cry of the little ones who are seeking justice."

Victims expected "concrete and efficient measures" and not mere condemnations, he added.

The pope and the almost 200 participants in a Vatican auditorium watched a video of five victims, who wished to remain anonymous, telling painful stories of abuse and cover-up.

"From the age of 15 I had sexual relations with a priest. This lasted for 13 years. I got pregnant three times and he made me have an abortion three times, quite simply because he did not want to use condoms or contraceptives," a woman said.

A Chilean man said that when he reported abuse to religious authorities he was treated as a liar and an enemy of the Church.

Cardinal Luis Tagle of the Philippines broke into tears as he read a keynote speech that acknowledged: "wounds have been inflicted by us, the bishops, on the victims."

In Ireland, the sexual abuse scandal shattered the power of the Church which four decades ago dominated Irish society. In the past four years, voters approved abortion and gay marriage, defying the Vatican.

In Chile, all of the country's bishops offered their resignations to the pope last year over a widespread cover-up. Francis accepted seven of the resignations and dismissed two others from the priesthood.

A poll by Santiago-based think-tank Latinobarometro showed the number of Chileans calling themselves Catholics fell to 45 percent last year, from 74 percent in 1995.

A report by a grand jury in Pennsylvania last year revealed that priests had sexually abused about 1,000 people over seven decades in that US state alone.

Before it started, some victims' groups said the conference was an attempt to cleanse the image of the 1.3 billion-member Church.

But Anne Barrett-Doyle of bishopaccountablity.org, which tracks abuse cases around the world, said she was pleasantly surprised by the pope's opening remarks.

"They said this was going to just a teaching session but he is now talking about concrete measures. That's good but let's see how it ends up," she told Reuters.

Journalists were permitted to listen to the conference speeches via audio and video links but not the debates that followed.

Archbishop Charles Scicluna of Malta, the Vatican's top sexual abuse investigator, said the Church had to look at how priests and bishops are appointed.

"The question of future screening of candidates for the priesthood is fundamental," he said in a speech steeped in legal details about how bishops must collaborate with civil authorities, adopting a "culture of disclosure" and for society to know that "we mean business."