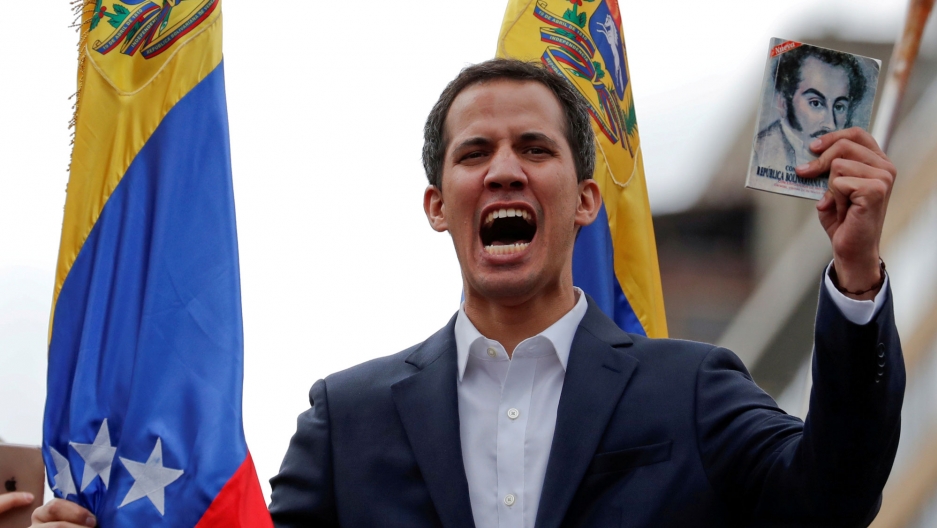 Juan Guaido, President of Venezuela's National Assembly, holds a copy of Venezuelan constitution during a rally in Caracas, Venezuela.

Venezuela's opposition is trying to convince ruling Socialist Party officials to join a transition government, shifting focus as it seeks to unseat President Nicolas Maduro, who has clung to power in the face of growing international pressure and US sanctions.

In January, Venezuelan opposition leader and Congress chief Juan Guaido invoked the constitution to assume the interim presidency after declaring Maduro's reelection in May 2018 illegitimate. He swiftly received recognition from the United States and Latin American powers.

In an effort to secure the backing of Venezuela's military, Guaido proposed an amnesty for officers who turn on Maduro's government.

But defections have been minimal and top brass has declared allegiance to Maduro, dimming hopes of a quick end to an economic disaster that has prompted millions of desperate Venezuelans to flee abroad, fueling a regional humanitarian crisis.

Amid fears the changes have stalled, opposition leaders have begun to talk in the past week about bringing ruling Socialist Party stalwarts into a potential transition government.

"This transition requires a large national agreement between the country's political forces," Edgar Zambrano, vice president of the opposition-run National Assembly, said in an interview.

Zambrano said any transition must include "Chavismo," the left-wing movement founded by Venezuela's late leader Hugo Chavez, who hand-picked Maduro as his successor.

"You cannot disappear Chavismo and you cannot go from persecuted to persecutor. This is not political revenge," he said.

It was not immediately clear how actively the opposition is building bridges. Opposition leaders say they maintain contact with government officials and military officers but keep such talks confidential to avoid affecting those involved.

Maduro says he is the victim of a US-orchestrated coup attempt and has refused to resign.

Many rank-and-file opposition supporters hope to see Maduro and his allies exiled or behind bars, and would be frustrated by attempts to bring them into the transition.

Guaido's decision to assume the interim presidency revitalized Venezuela's fragmented and disillusioned opposition and led to a flurry of street protests.

Hopes of quick change were fueled by diplomatic support from numerous countries and tough US sanctions on Venezuela's vital oil industry, which has bankrolled Maduro's government.

Some in the opposition quietly predicted a military pronouncement in favor of Guaido as early as Jan. 23, the day he proclaimed himself president at a rally in Caracas. Top military officials were silent for hours after Guaido's pronouncement, leading to speculation that Maduro was frantically negotiating with officers not to switch sides.

Yet only a handful of active officers backed Guaido. Expectations of a quick military proclamation have given way to concerns over a slow and complicated path forward, both in Caracas and Washington.

"I don't think (Washington) understood the complexities of the target, of Venezuela: all the overlapping security that Maduro has available; the things at his disposal," said one former US administration official in touch with current officials.

The idea of a unity in Venezuela was included in a little-noticed provision of a Transition Law passed by the National Assembly in January.

Venezuela's four main opposition parties all back the idea, but in the past week have increasingly discussed the issue.

"People must understand that Chavismo is not just Maduro," legislator Stalin Gonzalez said in an interview with Reuters last week, in comments that sparked a backlash on social media.

Some opposition supporters say they would be open to middle-ranking or dissident socialists being included in an interim government, but not the top brass.

"They must pay for what they have done," said Maria Elena Fonseca, who at age 78 struggles to make ends meet despite working as a psychologist. Like countless Venezuelans, Fonseca has seen her income eroded by hyperinflation that now tops 2 million percent annually.

Fonseca receives remittance from her daughter abroad, who is among the estimated 3 million Venezuelans who have fled the once-prosperous nation since 2015.

"It's not about revenge: it's about justice," she said.

Back channels between the two sides are considerably better developed than might be expected from 20 years of acrimonious politics and the constant slew of vitriolic social media commentary.

Gonzalez and other young legislators developed relationships with Socialist Party politicians in 2016. The two sides coexisted in the legislature until Maduro backed the creation in 2017 of an all-powerful, government-controlled Constitution Assembly with the aim of sidelining Congress.

Guaido's team is wielding a stick as well as a carrot. It has held massive protests nationwide over the past month and will face off with authorities when it attempts to bring humanitarian aid into the country on Saturday.

Meanwhile, Washington's crippling sanctions on the oil sector are expected to take effect in the coming weeks, cutting off funding to Maduro.

The risk, however, is that a standoff will drag on for months, disillusioning opposition supporters while allowing Maduro to blame an escalating economic crisis on the US sanctions.

"The longer times passes and the opposition doesn't pose a legitimate threat to Maduro, the more confident he will get," said Raul Gallegos, an analyst with the consultancy Control Risks. He noted that Cuba, Zimbabwe and Iran all resisted international opprobrium and sanctions for decades.

"Chavistas are willing to drive this country into a level of despondency and reduce the economy to a level Venezuela hasn't seen in decades as long as they can remain in power," he said.

By Brian Ellsworth and Sarah Marsh/Reuters