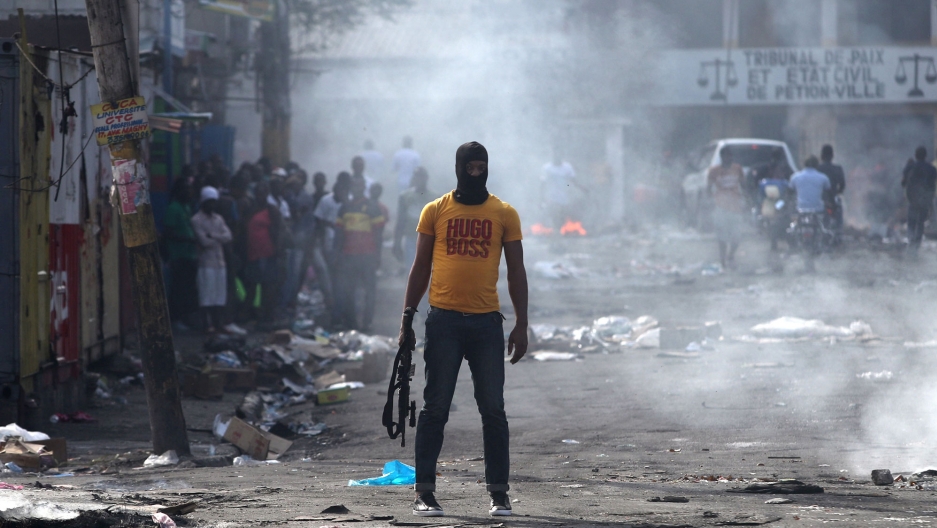 A man holds a weapon next to burning barricades during anti-government protests in Port-au-Prince, Haiti, Feb. 17, 2019.

During a televised address on Saturday night, Haitian Prime Minister Jean-Henry Ceant vowed to deepen the investigation into alleged corruption in the PetroCaribe oil program and to reduce its expenses. The address was an effort to meet some of protesters' demands as demonstrations roil the country.

During the address Ceant announced nine measures aimed at alleviating the country's economic crisis. Ceant said the government will reduce its expenses by 30 percent, meet with the private sector to try to raise the minimum wage and appoint a new director to intensify the investigation into alleged corruption by PetroCaribe.

"I and the members of the government listen to (the opposition's) voice, we hear his cry, we understand his anger and indignation," Ceant said.

Since Feb. 7, thousands of demonstrators have called for President Jovenel Moise and Ceant to resign and for an independent probe into the whereabouts of funds from the PetroCaribe agreement, an alliance between Caribbean countries and Venezuela.

The agreement's preferential terms for energy purchases were meant to help free up funds to aid development in the impoverished country hammered by natural disasters and ranked as the poorest in the Americas, according to the World Bank.

The protests, which have reportedly killed several people and injured many others, have highlighted widespread anxieties about the state of the economy, amid ballooning inflation and people's struggle to pay for basic necessities.

The US State department last Thursday ordered out all non-emergency US personnel and their families amid spiraling unrest, citing burning tires, road blockages and rampant violent crime including armed robbery.

Haiti has a long tradition of corruption, and international partners and anti-graft watchdogs have often blamed Haitian politicians for failing to crack down on the scourge.

Ceant warned that the protests risked touching off a humanitarian crisis.

"The population suffers a lot, because blocked roads cannot deliver water to drink, food, gasoline. It is almost impossible to have electricity," said Ceant, who had previously kept silent during the protests, which have reportedly killed several people and injured many more.

Demonstrations are expected to resume this week.

Moise also urged dialogue between government and the opposition during a speech on Thursday.

In a statement issued on Saturday, the Economic Forum of the Private Sector, a Haitian business group, welcomed the government's calls for dialogue but said the crisis was the result of Moise's "lack of leadership."