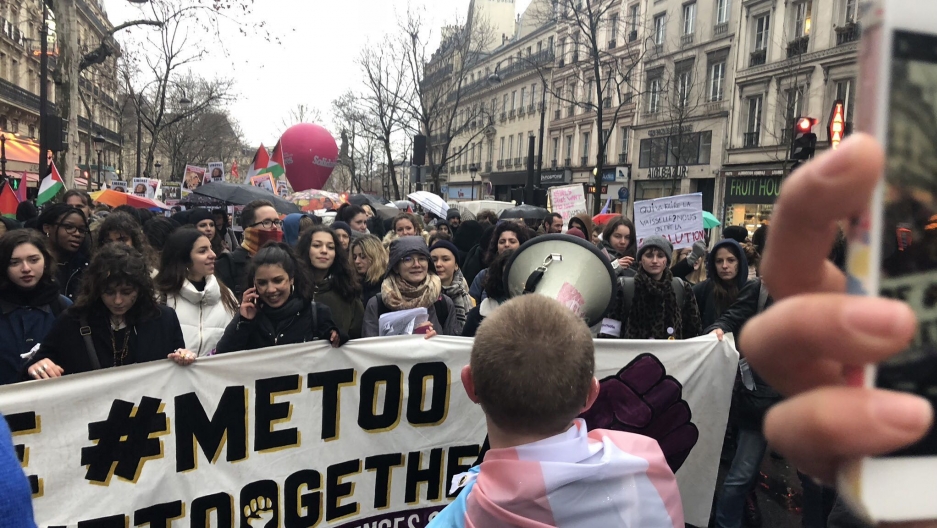 Activists tried to raise awareness about #MeToo at the Women's March in Paris, March 8, 2018.

Kenza Sadoun El Glaoui didn’t know that she was a target of the Ligue du LOL until this week.

There were rumors about the group’s existence circulating in Paris for years. But it was only confirmed recently.

The private Facebook group was made up of prominent French journalists — mostly men — who were behind a wave of online insults aimed at women, the LGBTQ community, people of color and other minority groups.

Sadoun El Glaoui is a well-known fashion blogger in Paris. She was one of the first people to start writing and vlogging about beauty in France back in 2008.

“One of them told me that I’m a 'slut.' A pute. It was the first time that I answered.”

For her, the harassment by the LOL League started in 2013. She ignored it for a long time. But one day, it crossed a line. “One of them told me that I’m a 'slut.' A pute. It was the first time that I answered,” said Sadoun El Glaoui. Another user responded to her, equating slut to fashion blogger.

She says she was humiliated. The harassment went so far as Photoshopping a picture of Sadoun-el Glaoui with an ice cream cone to show her holding a penis instead. She says it was retweeted thousands of times.

At one point, her younger sister even became a target. They’re not the only ones.

After the French newspaper, Libération, confirmed the group’s existence, dozens of people took to social media to write about their experiences with the LOL League.

Lucie Ronfaut, a tech writer at Le Figaro, says it came as a shock to all of Paris.

She says that this restarted a conversation about feminism in the capital, where, she says, many people considered the movement over. She points to the French culture of seduction and sexual liberation.

Ronfaut said she wouldn’t consider this the “MeToo movement for journalism in France just yet,” but that it’s close, and the conversation about sexism shouldn’t end there.

Ronfaut wasn’t targeted by the group herself, but she was one of the people who knew about the LOL League when she first started out on Twitter eight years ago as a student.

“We all knew about them. We all knew those people because they were big on Twitter. It was a thing that would be whispered by French women and journalists. Saying, 'You know, that club, Ligue du LOL, you should be careful.'”

“We all knew about them. We all knew those people because they were big on Twitter. It was a thing that would be whispered by French women and journalists. Saying, 'You know, that club, Ligue du LOL, you should be careful,'” said Ronfaut. “It was odd. We didn’t have any proof, but we were scared of them.”

The group’s harassment drove some victims offline. A feminist blogger who goes by the name, Daria Marx, wrote about how she was afraid to leave her house because the LOL League sent her constant death threats, targeting her for her weight and gender.

It even took a toll on people’s careers. Florence Porcel, a videographer, tweeted about how an LOL League member tricked her into thinking he was editor-in-chief at a “prominent” news outlet. The LOL League member recorded her “job interview” and then posted the audio on SoundCloud.

The article by Libération that exposed the group this week was criticized for “downplaying” the harassment victims went through.

Ketsia Mutombo, a co-founder of Féministes contre le Cyberharcèlement, or the Feminists against Cyberbullying association, avoids calling this type of harassment “trolling” because, she says, it’s something much more serious than that.

Currently, people working at four of France’s biggest left-leaning news outlets have been implicated, including Vincent Glad, a freelancer at Libération who created the LOL League in 2009.

He’s been suspended from the newspaper and he’s currently under investigation along with the online editor, Alexandre Hervaud, who was also part of the group.

In Glad’s apology on Twitter, he writes, in French, that he started the group on Facebook as a joke. But now he sees that it went too far.

Ronfaut says Glad’s apology is better late than never, but that it could have come years ago.

As for Sadoun El Glaoui, she says she’s glad that some accountability is being taken. But she’s not looking for revenge. Some French media sites asked her for her harasser’s name, but she says she refuses to give it to them because she doesn’t want him to undergo the same humiliation he put her through.

If she could go back and do it again, Sadoun El Glaoui says she would speak up about the harassment when it first happened to her, especially because now she knows so many other people were targeted by the group.

Sadoun El Glaoui’s message to young writers, bloggers and journalists starting their careers is to not let this kind of cyberbullying go unnoticed because “it’s not something that’s normal.”