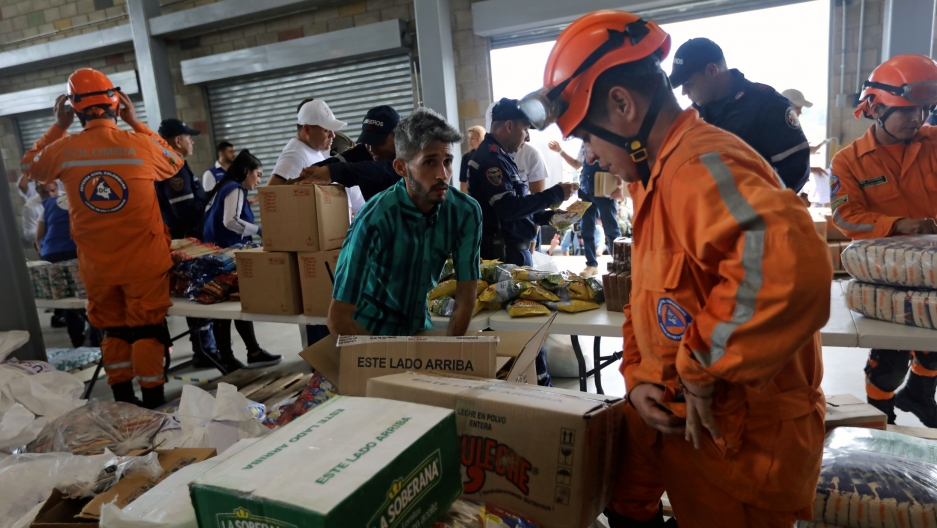 Workers organize humanitarian aid for Venezuela at a warehouse near the Tienditas cross-border bridge between Colombia and Venezuela in Cúcuta, Colombia, on Feb. 8, 2019.

Millions of dollars worth of baby formula, medical supplies and food is sitting in warehouses on Venezuela's border with Colombia. The United States has pledged $20 million while Canada has also made financial contributions.

The aid was supposed to be trucked into Venezuela last week to help its impoverished citizens.

But Venezuelan President Nicolás Maduro won't let the donations in.

Venezuela's government on Friday said the United States should distribute humanitarian aid in Colombia where it is being stockpiled, while the opposition warned that blocking much-needed food and medicine could constitute crimes against humanity.

Rival Juan Guaidó, who is recognized by dozens of countries as Venezuela's legitimate leader, warned military officers against blocking the arrival of aid amid spiraling disease and malnutrition brought on by a hyperinflationary collapse.

"Take all that humanitarian aid and give it to the people of Cúcuta, where there is a lot of need," Maduro said in a news conference. "This is a macabre game, you see? They squeeze us by the neck and then make us beg for crumbs."

Temir Porras Ponceleon served as chief of staff to Maduro from 2007 to 2013. He is now a visiting professor at Sciences Po in Paris.

Ponceleon, too, says the aid stuck at the border comes with strings attached. He spoke to The World's Marco Werman about the stalled humanitarian aid.

Temir Porras Ponceleon: This is a trap that the enemies of the government are posing. This is aid that is being sent by the US government and requested by Mr. Guaidó in a way of conveying the idea that the legitimate authority within Venezuela is Juan Guaidó.

Marco Werman: The voices of the opposition in Venezuela are either more numerous or louder than the Maduro supporters. Does Nicolás Maduro think he can survive the calls for him to step down?

The only way we will know if Maduro, if Guaidó, or if any other of the voices of the opposition will survive or play a key role, is if we find a way of democratically solving the problem. We can imagine the crisis getting deeper. Probably the government collapsing, but what about the day after? What about the military of Venezuela? What about the divisions within the military? What I am concerned is, to have a stable and democratic country the day after. And that requires not provoking each other, political dialogue and understanding.

A democratic solution, obviously, is preferable but we've spoken with so many Venezuelan opposition politicians and opposition voices in recent days and they describe a government that's clinging to power using coercion and proceeds from corruption. I mean that is the reality they're living day-to-day. It's hard to argue with that, isn't it?

"We can imagine the crisis getting deeper."

One of the things that have been said by the opposition very clearly is that there will be new elections. That is part of their plan.

And what guarantees that the departure of Maduro doesn't create a civil war, for instance? The reality of Venezuela is that it is a very polarized country. It is totally unrealistic or irresponsible to think or to assume that there are all the guarantees for Venezuela to be in a peaceful situation. In order to be an election, you have to agree on the terms of that election. When will the election be held? Who can be allowed to run for those elections? And that's exactly the problem — saying there will be elections is assuming that the problem is solved before even addressing it.

You say it's polarized but it's really only polarized if Chavismo is still a legitimate movement. There are so many people who have peeled away from Chavismo.

Absolutely — but wishing for the best is not a strategy. The people who assume that "Shouldn't Mr. Maduro leave," I say, "OK, so who can convince him of that?" Shouldn't the Chavismo, you know, surrender power. Well, why not? But they're not doing it. So, again, this is exactly the problem that needs to be tackled. You have two ways of tackling it: finding a way of getting out of the crisis politically or risk a conflict. That's the part that I believe some of the members of the opposition seem to be missing in this moment.

How worried are you by the prospect of civil conflict of some sort?

Extremely worried. That is why I keep warning about that risk.

Do you think it's likely?

Absolutely, it's highly likely. There are threats coming from the US administration saying, "Mr. Maduro must comply in a peaceful manner or else." There is always a military option on the table. That would be catastrophic for the country. A second way that can happen is also, imagine the millions in the military splitting, you know, between pro-Guaidó, pro-Maduro or pro-whatever. That is an extremely risky situation that can lead the country to a civil conflict instead of overcoming in a peaceful, civilized way the current crisis.

Editor's note: This interview has been edited and condensed for clarity and length. Reuters contributed to this report.