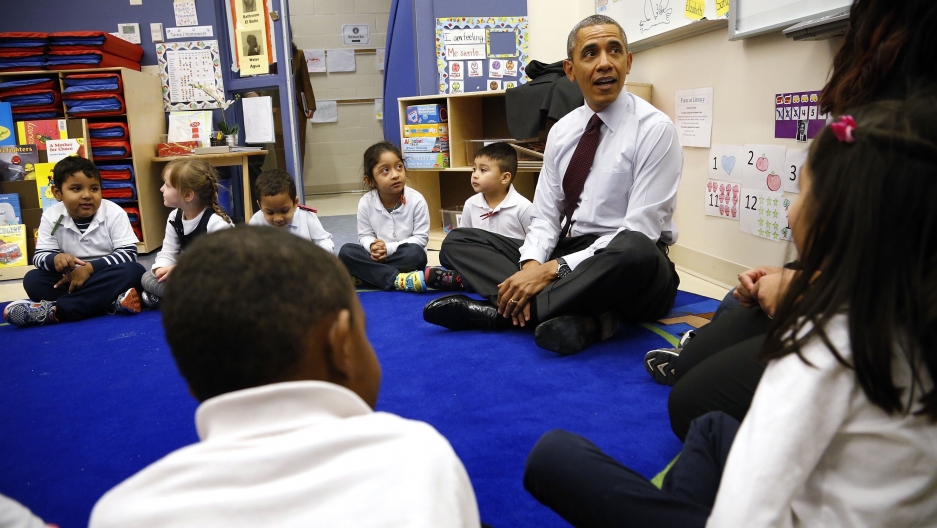 US President Barack Obama sits with 3- and 4-year old students in a pre-K class at Powell Elementary School in Washington, March 4, 2014. Obama chose the school as a venue to propose an expansion of popular tax credits for middle class and working poor Americans. Could the US be ready again to consider a universal child care system that works for all?

On a chilly, Friday morning at New Horizon Academy in St. Paul, Minnesota, a roomful of toddlers learns how to count and spell. For the spelling lesson, the teacher has given each child a dollop of shaving cream to dip their fingers in and “write” out words on the table. One girl proudly shows off the word, “boy,” as she wipes her hand on a bright red apron.

Every week, some 200 children come to New Horizon Academy. The center accepts infants to school-age children. Some of the families who drop off their kids here get some sort of government assistance or a scholarship to help with the $400 weekly fee.

That’s a pretty standard rate for child care in the US, but it’s a far cry from what these families would pay for day care in the Canadian province of Québec.

Related: This Canadian day care center re-creates 'the spirit of a large family' for kids and their single moms

“Actually, it started 20 years ago at [$3.81] a day. It was increased in 2004 from [about $3] to [$5.33] a day. And now, middle-class families pay [$6] a day,” said Pierre Fortin. He’s a Canadian economist at the University of Québec at Montreal who applauds the universal, low-fee child care program. Since its creation two decades ago, the program has become a model for the rest of the world.

Families there pay about $6 per day. The total cost to Québec province: $1.52 billion. Fortin says it’s a lot of money, but it’s offset by something else. More working women.

“The low-fee, universal system has been so successful in attracting new mothers. It has induced an incredible increase in the labor force participation rate of young women in Québec.”

“The low-fee, universal system has been so successful in attracting new mothers. It has induced an incredible increase in the labor force participation rate of young women in Québec.”

Fortin claims that 85 percent of women ages 26-44 are now in the workforce in Québec, the highest participation rate in the world, according to Fortin.

The increase in working women means more tax revenue, he says. Enough to pay for the cost of the universal program.

Here in the US, there’s an ongoing conversation: How the high cost of day care keeps some women with small children from taking jobs and missing out on career opportunities. Some people point to places like Québec, Sweden and France that have some form of universal care and ask — why can’t the US have something like this?

Actually, at one time, it did.

During World War II, while men were fighting overseas, women filled jobs in shipyards and factories. Think Rosie the Riveter. A lot of women moved for these jobs — away from the traditional support systems they had to look after their kids, such as relatives or neighbors. Bosses complained that women missed work when no one was around to look after the kids. Rosie needed child care and Uncle Sam was there to help.

So, Congress passed the Lanham Act of 1940, which provided subsidized care for at least 600,000 children 12 and younger in more than 3,000 centers across the country.

Winona Sample from the Red Lake Indian Reservation in Minnesota used to work at one of those centers in Paso Robles, California. She spoke about the experience in 2005 at the age of 88, with an oral historian at the Lawrence de Graaf Center for Oral and Public History at California State University, Fullerton.

“My mother-in-law took a job there. And she said it was such fun, ‘Why don't you volunteer?’ I said “OK.” My son was 6 [he was born in 1936]. So I said, ‘OK.’ Two weeks later, they offered me a job as an assistant. About a month later, I was a director. It was really fast job growth,” Sample told the historian.

Like the Québec program, these centers didn’t come cheap. In today’s dollars, the total cost was more than $762 million according to Chris Herbst, at Arizona State University’s School of Public Affairs.

When the war ended, so did the funding for most of these centers, Herbst says.

“And the reasons for that I think, have to do with, you know, perceived costs of those programs. Who's going to pay for them?” Herbst said.

Another question was who should care for kids. Moms or the government?

“Public opinion, and certainly the opinion of government administrators, was pretty negative on the role of institutional child care. Child care was very solidly seen as a private responsibility or the responsibility of families.”

“Public opinion, and certainly the opinion of government administrators, was pretty negative on the role of institutional child care. Child care was very solidly seen as a private responsibility or the responsibility of families.”

The war was over and men returning from the war needed jobs. It was said that moms should return to the home. But they didn’t. According to Herbst, the percentage of women who worked before and after the war jumped 10 percent, and it stayed that way.

Herbst says even though the Lanham Act program didn’t survive, it did change public opinion about child care outside the home. It also helped increase women’s participation in the workforce — just like the program in Québec.

In 1971, the US got close to adopting universal subsidized child care. Congress passed legislation, but Richard Nixon vetoed it.

But that’s the last time the US seriously considered it.

So, does it even make sense to look at what other countries are doing? Betty Emarita, who has studied child care in Minnesota and the US for 15 years, says yes, but cautioned, “I don't want to say that, you know, all of the solutions are from outside the country.”

Families often rely on friends, relatives and sometimes neighbors to help them with child care — as an answer to the high cost of day care.

At one point, Emarita went to Sweden to study their child care system, and she thinks it would be great if we had government services like Sweden or Québec. But the bottom line is: We can’t wait for a time when the US is ready to consider those kinds of models, she says. We have to build on what working families here are already doing.

“I think that if we paid attention to what families figure out in their communities, we could learn a lot,” she said.

In the Minnesota Legislature, the HF1 bill has been introduced to lower the cost of child care and provide subsidies. It’s not a Québec-stye solution, but it’s a start.