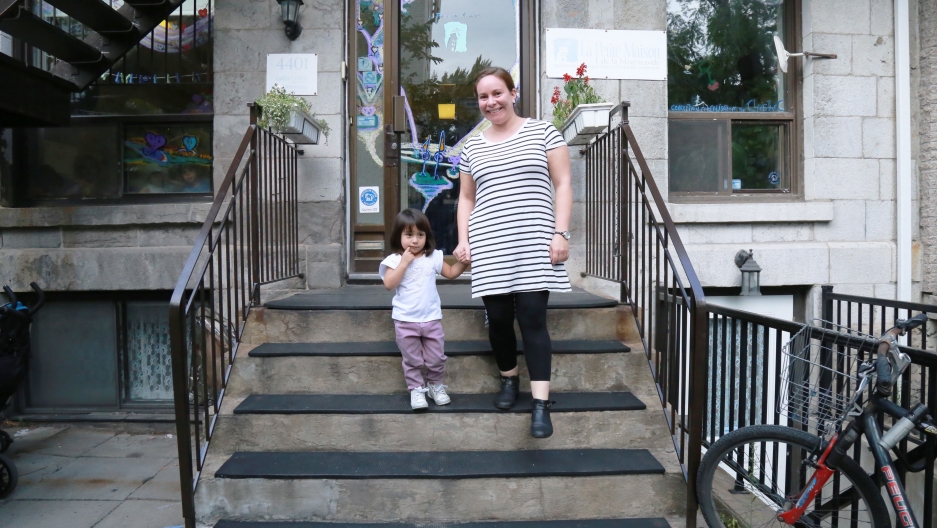 These mothers have gone through a breakup. They don’t particularly enjoy being around couples who are happily married or seeing how other children’s fathers pick up their babies after work. And in Montréal, they don’t have to. Instead, they can sign up their kids for a day care where every mother is a single parent.

At La Petite Maison de la Miséricorde ("The Little House of Mercy"), a publicly subsidized day care for the children of single mothers, the objective is to take care not only of the children but also of the women. While the children have music, dance and gymnastics lessons, the day care also organizes events for their mothers — summer picnics, monthly spaghetti dinners and outings to the cinema or museum and workshops on self-defense or passing a job interview.

There are activities on Valentine’s Day and Christmas and apple-picking and sugar shack trips as a group. A staff member is assigned to assist every woman — to accompany her to court or medical appointments and refer her to other organizations for help with housing or food.

“For me, it was important to be with women who are going through the same things as me and to be accepted because even today, there is a lot of prejudice against single mothers,” said Michele Desmeules, a single mother who also works as a community organizer at the day care. “We try to re-create the spirit of a large family that single mothers don’t have. Everyone has similar problems, so, there is an understanding.”

In fact, Desmeules is not the only single mother who works in the day care. Other mothers serve the food, do the dishes or work as educators. This allows them to increase their monthly incomes, even if it is just a few hundred dollars more every month.

“We pay a lot of attention to the mothers. When we see that the mothers aren’t doing well, we get involved right away. We ask them, ‘Why were you sad, why were you crying?' We had mothers who came in the morning who were crying,” said Naïma Boukhatem, the assistant director of the day care.

The Québec government’s Ministry of Families subsidizes the day care, which means that mothers pay a flat rate of approximately $6 per day.

Related: Why Japan is paying single mothers to move to the countryside

Founded by the Catholic nuns Sisters of Mercy, the day care grew out of an earlier system when unmarried women gave birth in secret and put their children up for adoption in order to not bring shame on their families, said Sister Rachel Demers, a nun who has worked at the day care for 40 years. But by the 1970s, Canadian women were no longer ashamed of having children outside of marriage and wanted to keep their babies, she said. It was then that the Sisters of Mercy opened La Petite Maison de la Miséricorde — initially to give shelter to poor, unmarried mothers and their children.

Now, the shelter no longer exists, but the day care, where children are accepted only if their mothers are single, continues on. There is a similar center called Carrefour de la Miséricorde in Gatineau, near Ottawa, and Rosalie Hall, which is near Toronto. There is also a day care for single mothers in Ecuador called the Children of Ecuador Foundation.

In Montréal, the day care has now lost its religious aspect. The last two nuns who have been working in the day care retired this summer. They are 93 and 88 years old, and can no longer live independently, so, they moved into a convent, said the director of the day care Michelle Pelletier, who took over from the nun who founded the institution.

“We will continue their mission,” Pelletier said.

For Elisa Cyr, a 32-year-old mother who separated from her abusive husband when her daughter Alice was only a baby, it is the warmth with which she was received at the day care that mattered the most.

“They listened a lot. I can talk to them about everything, and they don’t judge me,” she said.

For other mothers, the most important aspect is that there is no waiting list to enroll their children. There is so much demand for spots in Canada’s subsidized day cares, particularly in big cities like Montréal, that women are sometimes advised to get on a waiting list as soon as they find out that they are pregnant. Sometimes they have to wait for years to get their children into a day care. But there is no waiting list at La Petite Maison de la Miséricorde.

According to Sylvie Lévesque, who is the director of the Québec Federation of Single Parent Households, the children from single-mother homes are less likely to attend day care — despite the fact that these services are particularly needed by mothers who are raising children on their own. Sometimes they don’t attend because single mothers can’t afford even $6 a day, or they might work low-wage jobs that are not during normal business hours — so, day cares can’t accommodate them. And then there is the fear that they will be looked down upon or stigmatized, she said.

“Day care is important for all families, but especially for single mothers — because, as you can imagine, they can’t even go to the grocery store [if they have no one to leave their kids with] — to say nothing of going back to school or getting back into the workforce. Some don’t even have relatives to leave their kids with,” she said.

While she said that La Petite Maison de la Miséricorde is “exceptional,” Lévesque is not sure that it would be a good idea to open more day cares for the children from single-mother households. Instead, the government should focus on establishing day cares that are open during the weekends and evenings, and making the service affordable to everyone. Next year, Québec is promising to make day care completely free for mothers who receive welfare, she said.

“A day care is also important for children to learn — so that when they start school, they are on the same level as the others,” she said. “So, we should be careful to not ‘ghettoize’ them. It’s not a disease to be from a single-parent home.”