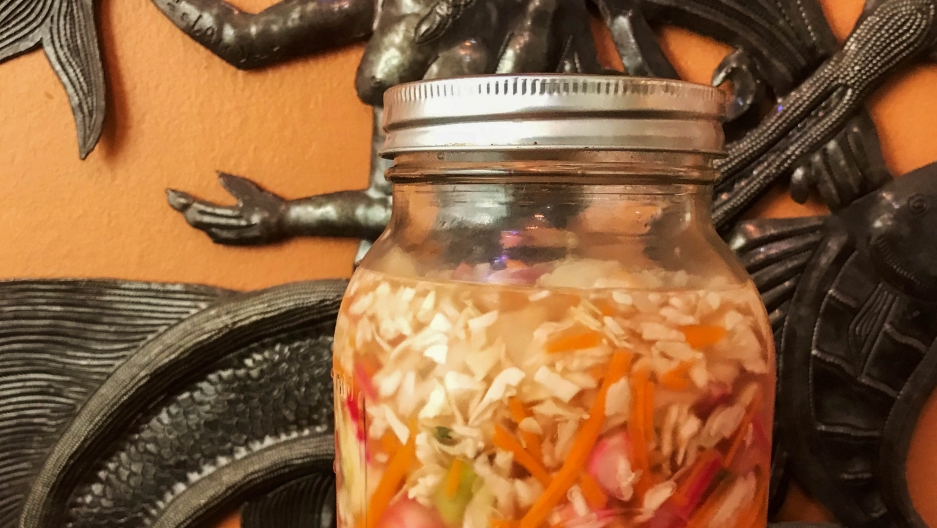 Pikliz, a spicy pickled medley of shredded cabbage and carrots, is gathering fans well beyond the Haitian community where it originated.

In every Haitian restaurant, savory dishes come with a side of pikliz, a spicy pickled medley of shredded cabbage and carrots. Visit a Haitian home and you’ll likely come across a homemade stash of pikliz fermenting in a recycled glass jar.

The condiment has always been ubiquitous to Haitian cuisine, but in South Florida, pikliz also boasts a devoted following among people in-the-know outside of the Haitian community — and local Haitian food entrepreneurs around Miami's Little Haiti neighborhood are capitalizing on the love. South Florida boasts one of the largest populations of Haitians in the US, and Little Haiti is where many first settled when arriving from Haiti in the 80s. These days, you can find local non-Haitian restaurants serving pikliz with organic chicken or arroz con frijoles, or rice and beans; big box grocery chains carry pikliz; and Haitian food entrepreneurs are offering artisanal handcrafted pikliz at local farmers' markets.

Cynthia Verna, better known as Chef Thia, says as a Haitian chef, pikliz is one of the top requests she gets from her friends and clients.

“I have my Puerto Ricans, my Cubans, my Dominicans. They’re all like: ‘I need to have pikliz,'” she said. “'Pikliz with eggs, pikliz with spaghetti, pikliz with everything.’”

She says the allure of pikliz is simple: It adds just the right amount of heat and crunch to every bite of a savory meal. Though it is regarded as a condiment, some pikliz aficionados have been known to eat it like a salad straight out of the container.

There is no direct translation for pikliz in English. Some people describe it as a Haitian kimchi or a spicy pickled salad. Nicaraguans make a similar, albeit less spicy version, called ensalada de repollo, which is a kind of vinegar-based slaw.

The heart of the pikliz, says Chef Thia, is the pepper—scotch bonnet or habanero blended into an acidic liquid base, usually vinegar, lime or sour orange juice. “The whole point about the pikliz you need to remember is that in Haiti not many people have electricity, so the acid is what keeps it,” she said. 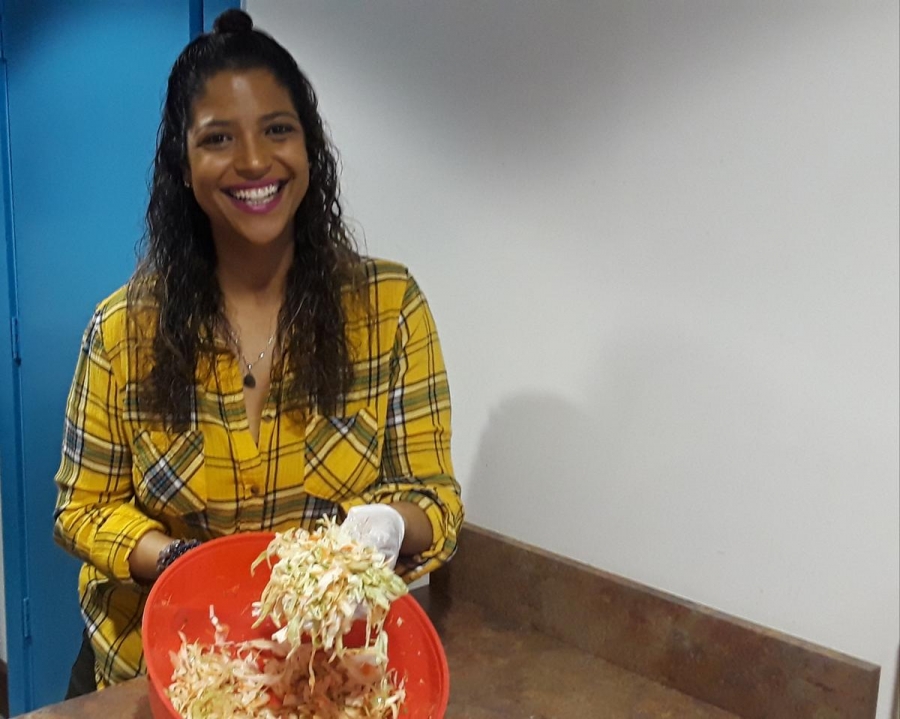 The base is always cabbage and carrots, but pikliz can also include bell peppers, onions and scallions. Some prefer a simple dash of salt and pepper to flavor it or a more complicated blend of spices that include crushed bouillon cubes.

“I recalled observing my grandmother make her own style of pikliz,” said Georges Hebert Laguerre, who sells his own branded jars of the condiment in Little Haiti. “She would get the green beans, mince them out, she would put shallots in it, key lime, sour oranges and a lot of habanero chile.”

Laguerre said every pikliz has its own special touch, depending on where you’re from in Haiti. “You go the northern part you have another style, then you come to the central part of Haiti and there’s another style,” he said.

Chef Thia, for example,  learned how to make pikliz in Petit-Goâve, Haiti when she was about seven or eight years old.

“We would learn mostly when we would go [to the provinces] with my grandparents in Ti Gwav and that’s where I learned with the people,” she recalled.

The people were the Haitian women street vendors who cooked fritay—fried pork, fried plantain, fried shredded yucca— in giant pots of hot oil on the side of the road. Fritay always gets topped with a generous helping of pikliz.

Related: In Miami's Little Haiti, one of the largest evictions is currently underway

Verna says recently she stopped for dinner at a Latin American restaurant in Kendall, a neighborhood in Miami-Dade County, and her rice and beans came with a side of pikliz. “I said, ‘Haitian pikliz in Kendall?’ And they said, ‘Yeah.'”

It’s not just in Kendall. Pikliz has quietly been making its way into non-Haitian restaurants in Miami-Dade County for years. The Heads or Tails Seafood Market, sandwiched between Hialeah and Liberty City, two other neighborhoods in the area, has proudly served pikliz for ten years and counting.

“I'm Cuban,” said Willy Perez, owner of Heads or Tails. “ We eat tostones, which are the green plantains, and Haitians eat a lot of that too, and we love putting it on the tostones.”

Perez was first introduced to pikliz when he worked at Zoubi Supermarket, a grocery store that caters to mostly Haitians in Little Haiti. Chris Ladouceur, a Haitian caterer, would bring her Piment Lacaye brand of pikliz jars to sell there. Perez bought a few jars to test out at his restaurant and it was a hit.

“People love to put it on their fish and rice,” he said. Most of his customers aren’t Haitian and had never heard of pikliz, but once they’ve tried it, they ask for more, he said.

Perez now buys his pikliz wholesale from Ladoucouer, whom he jokingly refers to as Chris picante, or spicy. He estimates he goes through about 10 gallons of pikliz a week and he also sells the retail jars for customers to take home. Every now and then, Perez says he runs out of pikliz and his regular customers who have come to rely on the spicy pickled flavor boost revolt. 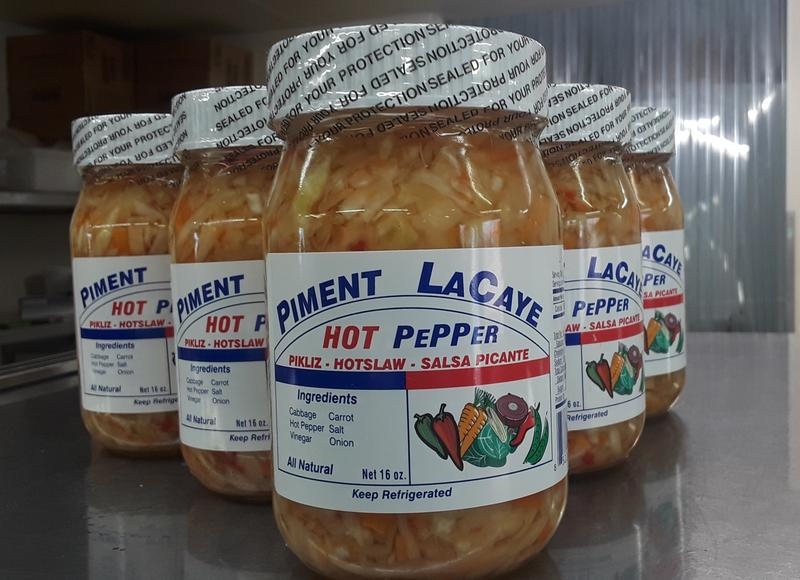 Piment Lacaye is a Haitian-owned pikliz brand that is sold at Heads or Tails Seafood Market and local grocery stores.

Nadege Green/WLRN for The World

In Little Haiti in Miami, China Express serves fried rice and egg rolls with a side of pikliz. Customers are invited to help themselves from a large tub of the spicy mixture near the cash register at the small Chinese takeout restaurant. And just a few blocks down from there, Claude Postel, the owner and chef at Sixty 10, an organic rotisserie chicken restaurant, serves a no-fuss pikliz alongside organic chicken and pan sautéed brussels sprouts.

Related: Haiti has a burgeoning entrepreneur scene. But can it make room for the Haitians forced to return from the US?

Postel is originally from France. He said he learned how to make pikliz from one of his Haitian sous chefs and realized it was a must-have condiment for his menu.

Haitian entrepreneurs— from wholesale vendors like Ladouceur to smaller artisanal pikliz-makers— make it easy for those who don’t want to make their own pikliz. They sell to supermarkets, restaurants, locals and tourists.

Smaller Caribbean-centric supermarkets like Bravo and Presidente normally carry several varieties of pikliz. Publix, Winn-Dixie and Walmart carry larger commercial pikliz brands like Madame Gougousse in some of their stores and pikliz can also be purchased in neighborhood cafes and storefronts.

George Hebert Laguerre, who runs the small cafe in downtown Little Haiti,  said when new customers come in who’ve never had pikliz, they usually ask him, “What do you put pikliz on?”