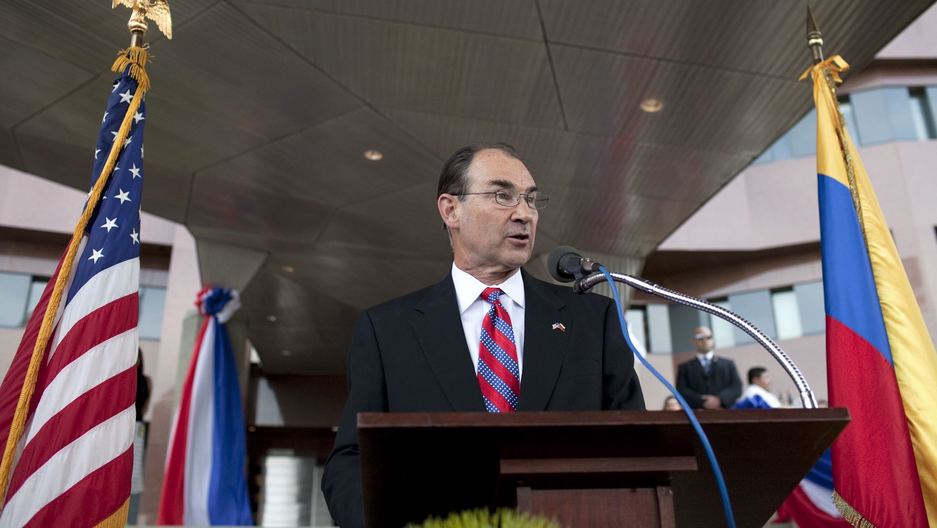 The former US Ambassador to Venezuela, Patrick Duddy, speaks to the media during a ceremony marking the 233rd anniversary of the US Independence day in Caracas, July 2, 2009.

Venezuelan opposition leader, Juan Guaidó, made an appearance at a rally in Caracas on Friday, despite concerns he could be abducted by President Nicolás Maduro’s regime.

The 35-year-old Guaidó, who declared himself interim president this week amid deadly protests in Caracas, found swift backup from the Trump administration and several other countries. In response, Venezuelan President Nicolás Maduro announced on Wednesday a break in “diplomatic and political relations” with the United States and ordered US diplomats out of the country by the weekend.

The Trump administration rebuffed Maduro's edict as illegal, however, having recognized Guaidó as Venezuela's legitimate head. As such, only diplomats considered "nonessential" have left the country, according to Patrick Duddy, a former US Ambassador to Venezuela under presidents George W. Bush and Barack Obama. He spoke with The World's host Marco Werman about the dangerous, but integral, state of affairs in Venezuela.

Patrick Duddy: The embassy is staffed. There has been a departure order for nonessential staff and some family members. But you know, the security and situation in Caracas has long been extraordinarily difficult. According to any number of international organizations, Caracas may well be not only the most dangerous capital city in the world, but arguably, for some people, the most dangerous city in the world; they have an extraordinarily high homicide rate. And in a period of relative instability, such as the present moment, prudence would dictate that Embassy staff stay within those neighborhoods in which security is relatively better.

Marco Werman: The footage I've seen of the protests and the rioting you talked about, the violence — I mean, the police firing on protesters, people dying — some of it suggests that without resolution at the political level this could devolve into something much worse. I mean, Ambassador Duddy, you've represented the US in Venezuela under Bush and Obama. Based on your experiences there, where do you think things are headed?

If, in fact, the EU, the US and the countries of Latin America can plot an exit strategy, then perhaps further violence and suffering can be avoided.

But an exit strategy for Maduro?

Yeah, it's no longer attainable for them to hold on to power.

So, I know you've been a longtime proponent of Latin America providing regional support and outreach to Venezuela, and now there's this overwhelming support from a lot of Latin American countries for Juan Guaidó for interim president. The United States is also on board; the EU is on board. Regardless of how anyone feels about Maduro, this seems like an aggressive move to recognize this other person. How do you see it?

"Venezuela is increasingly a failing or even failed state. And as the neighborhood, if you will — Colombia, Ecuador, Brazil, et cetera — are discovering, the problems of a failed state cannot be contained by the state's borders."

This is not so much an aggressive move as a logical move given the increasingly dire circumstances within Venezuela. Venezuela is increasingly a failing or even failed state. And as the neighborhood, if you will — Colombia, Ecuador, Brazil, et cetera — are discovering, the problems of a failed state cannot be contained by the state's borders. About 3 million people have fled Venezuela, and taking care of those refugees is taxing the support services of all of its neighbors and also putting them on notice that if things don't change in Venezuela, it's going to get worse not only internally but externally.

So, as far as Latin American countries go, and supporting Juan Guaidó, do you think this is the region just kind of jumping at the opportunity for change in Venezuela?

I think what's happened in the last week should rather be seen as a logical progression. Imagine, if you will, that you had your savings in the national currency in whatever country and you were experiencing 1 million percent inflation.

Yeah, I don't even know how to calculate that.

Right. I mean, who does? Millions of Venezuelans have seen their savings and retirement programs completely wiped out. There have been food shortages and shortages of medicine, a surge in criminal violence, drug trafficking through the country and the very, very lively sense that people in the Chavista regime, and the Maduro administration, have presided over not only incompetent but corrupt management of the country.

So, is this a unique and hopeful time for Venezuela?

"I think it's a very dangerous time for Venezuela."

I think it's a very dangerous time for Venezuela. There are those in the government who insist on their legitimacy though most of the rest of the world rejects it. There are military elements which have sworn allegiance to the constitution but inevitably have ties with the current regime. There are those who fear that if they lose power they go directly to jail. It's not clear just what the pathway is to an assumption of real executive authority by the new interim president. What is clear is that most of the rest of the world believes that the current situation is unsustainable, highly unstable and that the country needs to return to democracy restore law and order and change direction economically. And it's going to need help.