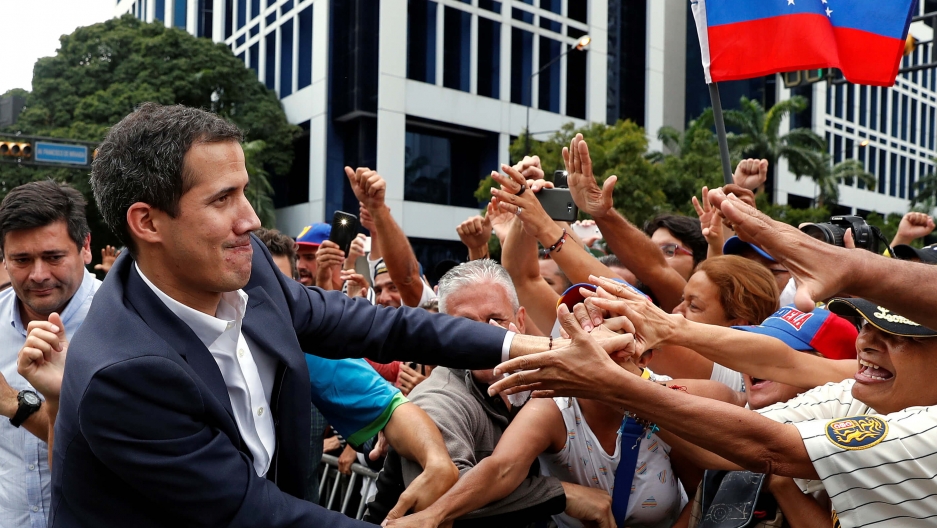 Juan Guaidó, president of Venezuela's National Assembly, greets supporters during a rally against Venezuelan President Nicolás Maduro's government and to commemorate the 61st anniversary of the end of the dictatorship of Marcos Pérez Jiménez in Caracas, Venezuela, Jan. 23, 2019.

This Wednesday, Venezuelan President Nicolás Maduro spoke to his followers from the same palace balcony where, in December 1998, Hugo Chávez celebrated his presidential victory. "I have decided to break political and diplomatic relations with the United States," he said to the crowd, adding that diplomatic personnel had 72 hours to leave the country.

A few months earlier, Maduro was re-elected for a second term amid hyperinflation, international sanctions, mass migration and few signs that conditions would improve. The European Union questioned the fairness of the election process, and 19 member states of the Organization of American States, including the United States, issued a statement declaring Maduro's second term as illegitimate.

Maduro’s government was weak, but until recently, the opposition was in worse shape — worn out after months of fruitless protests and divided over participation in what had been perceived as unfair elections. The decision to carry out state elections after the voting machine supplier Smartmatic denounced irregularities essentially extinguished the protest movement in 2017.

In the past few weeks, challenging Maduro's legitimacy has revitalized the opposition, which controls the National Assembly — the country's single legislature — calling people to gather in nationwide town hall meetings to build momentum for change.

That person is Juan Guaidó, the 35-year-old deputy from the Popular Will party, and this Wednesday, hours before Maduro's address in the presidential palace, he made his claim as president of Venezuela and continued his call to the military and the rest of security forces to go out and defend the constitution.

This was followed by mass demonstrations in Caracas and a series of diplomatic statements from countries around the globe who fixed their position on Guaidó. The United States and Brazil, which in previous weeks made quite clear their support to Guaidó, were quick to recognize him as the legitimate president.

Republican US Senator Marco Rubio, who has repeatedly manifested an interest in a government change in Venezuela, tweeted that Maduro now has no authority to recognize anyone and that if Maduro was "stupid enough" to harm any member of the US diplomatic body, US retaliation would be "swift and severe."

Meanwhile, on Wednesday night, Diosdado Cabello, a former military officer turned politician and popular TV pundit, sarcastically remarked that maybe the US diplomats will go if they don't have power or gas in their neighborhood. Cabello is regarded as one of the most powerful figures within Chavismo, though a rivalry with Maduro has persisted between the two.

In previous years, moments of tension existed between the US and Venezuela, particularly after Chávez was briefly ousted in April 2002 — an event Maduro repeatedly alluded to during his speech last Wednesday — and the attempted expulsion of US ambassadors several times in 2008, 2014 and last year. But despite threats, US diplomats never left. Venezuela remained a reliable oil seller and the United States, a reliable buyer, importing billions of dollars worth of Venezuelan oil.

Leonel Rosas, 35, a former Chavista now living in Spain, has no regrets about his past militancy but says Maduro is no Chávez. One difference is Maduro's speech and lack of connection with the people — the other is his failure to organize and manifest social policies for the greater good.

“Chávez made a series of social reforms [for] the least privileged sectors of society. He did it magnificently well. Chávez changed the picture in a country that for 40 years had ignored them."

“Chávez made a series of social reforms [for] the least privileged sectors of society. He did it magnificently well. Chávez changed the picture in a country that for 40 years had ignored them." Maduro, on the other hand, needs his advisers from Europe, just Latin Americans and Cubans, said Leonel, and this is a point the opposition likes to denounce now. “That’s where Maduro’s mistakes began,” Leonel said, also pointing to Maduro’s lack of financial transparency and accountability.

The European Union released a message defending the right to peaceful demonstrations and "strongly calls" for free and immediate elections within the constitutional order but only refers to Guiadó with his National Assembly position.

So far, 18 countries in Latin America and a handful of European ones have recognized Guaidó as president. Also, Luis Alberto Moreno, chairman of the Inter-American Development Bank, expressed interest in working alongside Guaidó, as well.

At the same time, countries that have reaffirmed their support of Maduro include China, Iran, Russia, Turkey, Bolivia, Cuba, Mexico and Uruguay. The first four have strong commercial and diplomatic ties with Maduro and Chávez, with China alone lending Venezuela $70 billion in the past decade.

For the rest, it’s a matter geopolitical solidarity against a traditionally dominant power in Latin America. Mexico and Uruguay have expressed in a joint statement that, in collaboration with Spain and Portugal, that they call an end to all violence and all parties at the table to negotiate.

However, many in the opposition regard this as a stalling maneuver to let the momentum of the demonstrations die out, given the experience with the massive protests of 2014 and 2017.

"The first main difference is that we were not attacked. This is super weird. In 2017, the fact you were going to face violence was known, and you couldn't do anything to avoid it. You knew you would find a picket line, tear gas and f------ hell."

Victor, a 33-year-old caraqueño musician and writer from Caracas and veteran of previous protests who asked his full name not be used for security reasons, says this time was radically different. "The first main difference is that we were not attacked. This is super weird. In 2017, the fact you were going to face violence was known, and you couldn't do anything to avoid it. You knew you would find a picket line, tear gas and f------ hell."

He explains how political protests in Venezuela have tended to follow a certain script: "You go out, everyone is singing, everybody is chanting. You see people taking selfies. Everybody's high-spirited.” But after a certain point, between one district and another, things suddenly get real.

"There, the march suddenly stops and if you move in front you see why: There's a picket line of police officers in riot gear, but by this point, you already hear them shooting tear gas — none of that happened on Wednesday." Though in some parts of Caracas, protests did turn violent later in the afternoon as national guardsmen fired tear gas in certain neighborhoods.

Victor remarks that this type of demonstration organized by political movements can’t be compared to the spontaneous riots that have erupted in the past days in working-class neighborhoods in western Caracas. For many years, any kind of anti-Chavista sentiment anywhere west of Plaza Venezuela (the geographical and socioeconomic divide in the city) was unheard of.

"Since early on, during the 2017 protests, there was a clear dead point that we never overcame." For him, between the international support and the institutional backing of the constitution, there are not many options for Maduro and the rest of the Chavista top brass.

If they act, it could trigger an international incident. If they don't, it would be all but a surrender. "Why do you think they haven't arrested him yet?"

For Rosas, he has lost faith in Venezuela. He admits to feeling a glimmer of hope, but he also feels it’s necessary to play by the rules.

And like many Venezuelans, Victor is unsure what will happen in the next few days and a bit troubled about feeling optimistic, but he thinks this is the end. "Finally," he sighed.