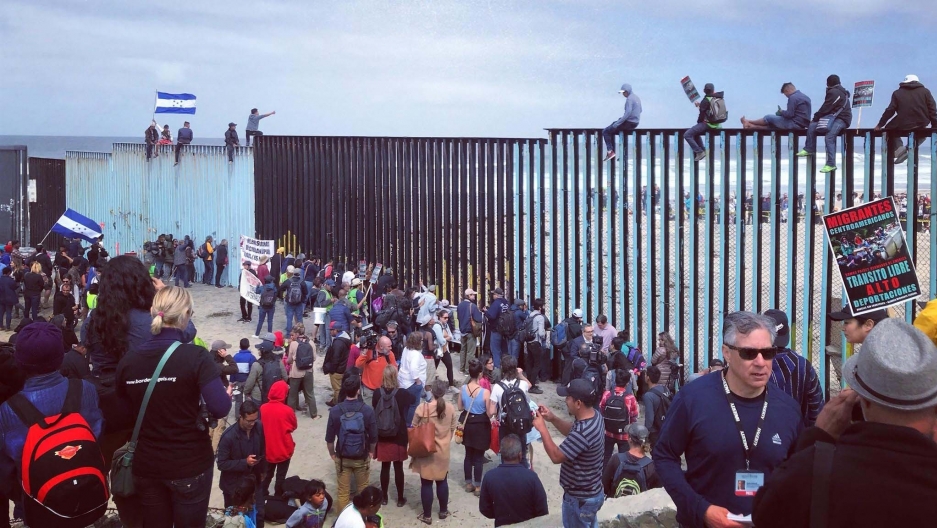 In spring of 2018, several hundred migrants from Central America arrived in Tijuana, Mexico. Here, people gather at Friendship Park on the Tijuana side of the border.

Courtesy of University of California, Irvine School of Law

Kiki Tapiero, a second-year law student at the University of California, Berkeley School of Law, is somber thinking about the moment she returned to the US after spending a week of her winter break in Tijuana, Mexico. She and some classmates walked through a pedestrian footbridge, waited in line, talked with US Customs and Border Patrol agents and made their way to the US side. The process took a little more than 10 minutes.

Just a few hours before, in Mexico, they had been talking with Central American migrants who had traveled thousands of miles on foot to Tijuana and had been waiting for months near the border hoping to cross to the US.

“There’s a really big sense of privilege that I feel in being able to cross the border so easily,” she says.

Tapiero was one of 10 students from Berkeley Law who went to the border town as a volunteer with the organization Al Otro Lado, a group providing legal services to migrants seeking asylum at the US-Mexico border. (Tapiero and other students in this story say they are not speaking for the group, but are reflecting on their own experiences.)

Tapiero, who was in Tijuana Dec. 28 through Jan. 4, says her days were packed. In the mornings, she and other volunteers went to a port of entry where people wait to be processed for asylum. They talked with the migrants about what to expect and also observed the process, documenting how many people were on a waiting list and making sure that no one was being turned away. Under US immigration laws, people have the right to turn themselves in to border patrol agents and ask for asylum. 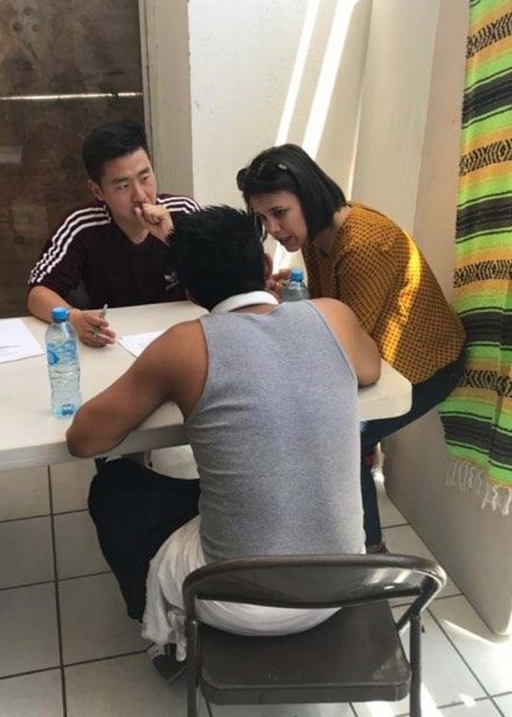 In spring of 2018, Peter Bae, a third-year law student and Samy Velasco Herrera, a volunteer interpreter with legal services organization Al Otro Lado, works to prepare a potential asylum-seeker for their credible fear interview, the first step in the asylum application process.

At lunchtime, Tapiero helped with workshops focused on migrants’ legal rights. She also helped with one-on-one consultations to prepare migrants for interviews with immigration officials, should they decide to go through the process. Tapiero said it was during these consultations that she heard story after story of people fleeing their home countries because of gang violence. She listened to tales of people whose lives were threatened because of their indigenous background or because they identified as gay, lesbian or transgender.

“We didn't have any relationship, yet they were still sharing with me the worst thing that had ever happened to them. And so, I felt really grateful that they were doing that. I wanted to help as much as I could,” she says. “But on the flip side of that, it was also pretty exhausting, I would say, having to hear these horrible stories again and again.”

Despite the weight of it all, Tapiero is more committed than ever to work in immigration law. Tapiero, whose father came to the US from Panama, was always interested in the field. After starting law school in 2017, she kept finding herself drawn to immigration cases. She worked at a domestic violence shelter and ended up connecting with immigrant women. Similarly, while working on a restorative justice program, she was drawn to cases where clients’ criminal records were impacting their immigration status.

Linda Tam, a co-director of the Immigration Rights Clinic at the University of California, Irvine, says that after Trump's election, controversies around immigration became more visible and at the forefront of major political debates.

Students are also volunteering in droves at the US-Mexico border, looking to put their skills to use. In response to this interest, some law schools are providing funding to support the trips through pro bono programs and legal clinics.

“Pro bono programs at law schools across the country are all really responding to this issue, immigration as a whole, ” says Deborah Schlosberg, director of Berkeley Law's pro bono program and the career development office.  The school’s pro bono program provided the funding for Tapiero and her classmates to travel to the border late December and early January.

Illegal crossings at the border have decreased overall in the past two decades. Border Patrol apprehended about 400,000 migrants in fiscal year 2018, compared to 1.6 million in 2000, according to US Customs and Border Protection. Yet, the Trump administration has ratcheted up its focus on the southern border and is pushing for a $5.7 billion border wall — a position that’s resulted in a partial federal government shutdown that has lasted a month.

Immigrant advocates balked at the border wall proposal, saying the real problem at the border is how the government is dealing with an influx of asylum-seekers, many of whom are families with children. They say constantly changing rules around the process — including requiring migrants to “remain in Mexico” as their cases play out in US courts and banning unauthorized border-crossers from applying — makes it difficult for migrants to win their asylum cases. When large groups of Central American migrants — so-called  "caravans" — arrive, US Border Patrol agents say they’re at capacity and only process around 100 applicants per day, according to Amnesty International.

Many migrants end up languishing in Tijuana as the waiting list grows. The law students often talk to migrants who are in this limbo. 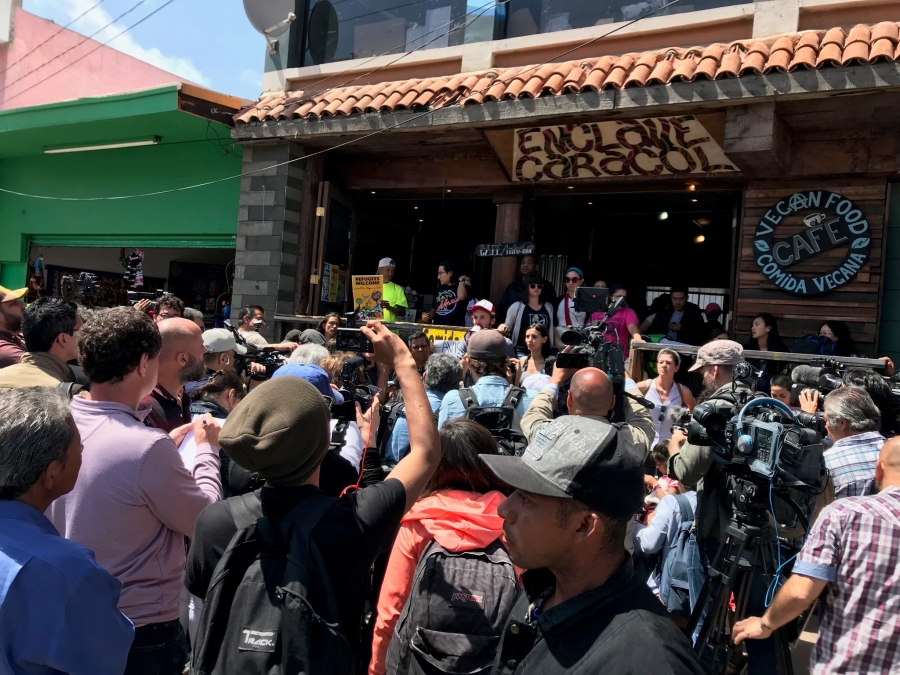 A press conference before a march to San Ysidro port of entry to request the US Government process asylum seekers in accordance with international and domestic laws. Students from UCI Law traveled to the border to assist in providing legal services to the migrants, including assistance with asylum applications and preparing clients for credible fear interviews, the first step in the asylum application process.

Sue Chang is a third-year law student at the University of California, Irvine, and has been to the border at least 20 times. She was one of a handful students who started working with Al Otro Lado through her school’s Immigration Rights Clinic. This allowed students to travel to Tijuana several times per quarter, starting fall 2017. Students have since logged some 500 hours working at the border, according to UCI Law administrators.

Chang said part of the learning experience is seeing the rules around the asylum process change multiple times and then relaying those changes. For example, in the summer of 2018, former Attorney General Jeff Sessions issued a ruling called Matter of A-B, which essentially said migrants may not use domestic abuse or gang violence as a basis for their asylum claims.

“Before, it seemed like we were going down there to help people with a limited and incomplete toolbox,” Chang says. “Matter of A-B felt like a hammer was taken out of the toolbox.”

A judge has since issued an injunction on that policy. But Chang says the process is still an uphill battle, and it’s important to be as transparent as possible about the asylum process.

“We let them know the high standard that you have to achieve in order to seek asylum,” Chang says of he work with asylum-seekers. “I've never met with a person who wasn't a victim of trauma, who in my opinion deserves a safe place to go, but [sometimes] it's just not sufficient in the eyes of the law.”

Helen Boyer, a former UCI law student who graduated in 2018, also learned how to have difficult conversations with clients as a former law student volunteer in Tijuana. She now works as a staff attorney at Al Otro Lado, based in Los Angeles.

“We learned client interviewing skills in law school, but no one really taught me how to do client interviews with people who have experienced really intense trauma,” Boyer said.  “And how to have those conversations about really terrible things that are triggering them and how to navigate that situation and also take care of yourself while you're doing that.” 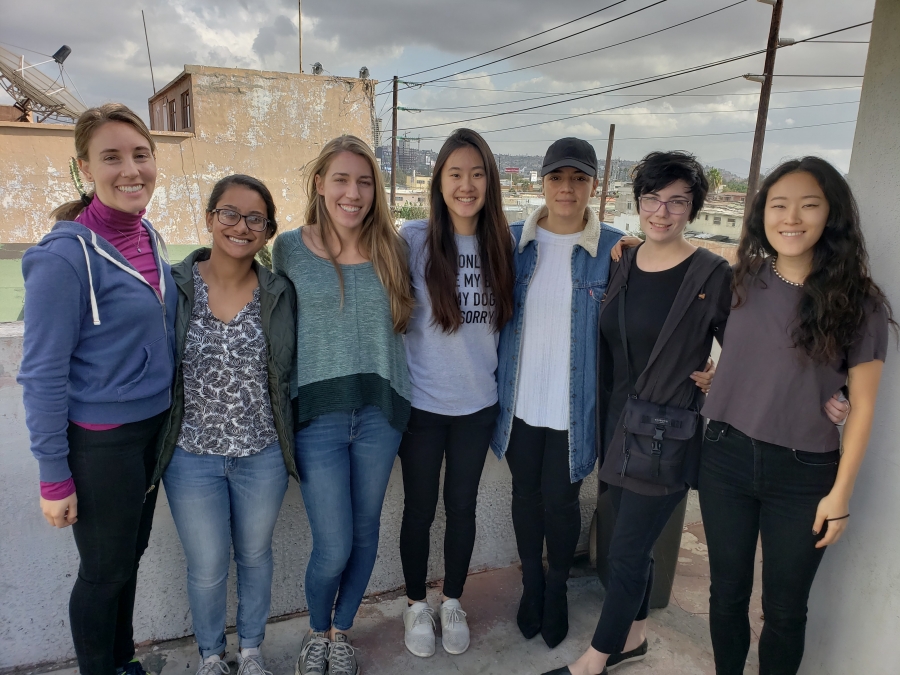 “Law school can be very abstract, you’re doing a lot of reading about cases,” Tam said. “[Volunteering] is a way to bridge what people are learning about in their classroom with what’s actually going on in the world.”

Kate Lewis is a third-year law student at the University of California, Los Angeles. She and her classmates created an immigration law student group at UCLA and found ways to volunteer with Al Otro Lado and the National Lawyers Guild.

“It’s been a little frustrating being in law school while the world is burning, especially the world of immigration,” Lewis said. “And so a way that I've sort of coped with that is trying to be involved with the communities I can.”

Many of the students who work at the border are motivated by their own personal connections to the immigration process.

Chang, from UCI Law, grew up in Los Angeles, where her Korean immigrant parents taught her the importance of knowing multiple languages and cultures. She says providing legal services at the beginning of the asylum process is daunting.

“This is an opportunity to advise people before they try to navigate the incredibly complex immigration system,” she says.

Amaris Montes, a first-year law student at the University of California, Los Angeles, also felt the pull to volunteer at the border because of her background. Her parents came to the US 30 years ago without documentation and are now citizens.