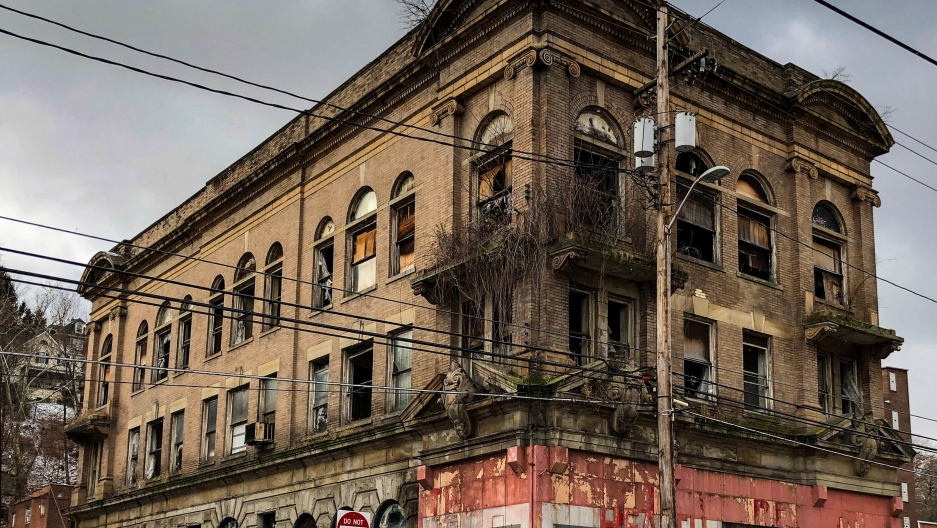 Monessen, Pennsylvania, was once a prosperous steel town. The small city 27 miles south of Pittsburgh has fallen on hard times since its steel mills shut down in the 1970s and '80s.

Downtown Monessen, Pennsylvania, is literally crumbling. Hundreds of buildings are boarded up or missing windows. A passer-by on the street stops and says, “Welcome to Hiroshima.” The population has fallen by nearly two-thirds since the city’s population peak in the 1940s. There used to be nine elementary schools; today, there’s one.

“What else could I do? I was desperate,” Mavrakis says.

Only Trump came to the small city — population 7,339  —  a former steel town about an hour’s drive south of Pittsburgh.  In June 2016, then-presidential candidate Trump made some bold promises.

Many apparently liked his message — Trump easily carried the counties south of Pittsburgh.  Trump siphoned off a lot of votes in 2016 and carried Westmoreland County easily, though he didn’t actually win the Monessen vote. Monessen has been solidly Democratic since President John F. Kennedy visited the old steel town in 1962. 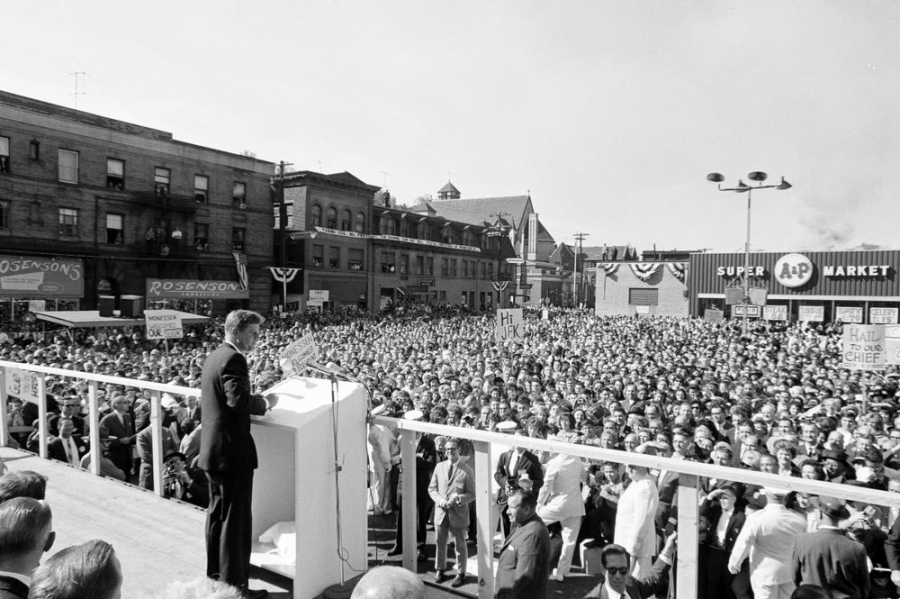 The former Monessen mayor said back in 2016 that he knew Trump couldn’t bring back the old steel mills. Still, Mavrakis isn’t angry with Trump for promising the world.

“Well, naturally, all politicians do that,” Mavrakis says. “I'm 81 years old, I've been through a lot of elections, you hear a lot of promises and they’re all false. They’ll say anything to get elected — that's the American way.”

Mavrakis adds, it’s not like Trump’s failure is unique. He says Republicans and Democrats have been ignoring the problems in communities like Monessen since the 1980s.

“Nothing has happened. This place didn't deteriorate overnight.”

Mavrakis says he was disgusted with both presidential candidates in 2016, so he made a different choice: “I voted for myself. I wasted my vote.”

Now, Monessen still has plenty of nice homes, parks and ample space. So, Mavrakis asks: Why not invest more in America’s dying industrial towns while we still can?

“What is wrong with that idea?” Mavrakis asks. “This country could give billions of dollars to countries that hate us? And you can't take care of the very communities that built this country? That's ridiculous. I mean, c'mon. It is going to come back and bite him [Trump] in the ass. You know why? You keep getting things made overseas and people don't have high-paying jobs, who's going to buy the damn product?”

That anger in places like Monessen helped get Trump elected. But now, some of that anger has turned on the president. 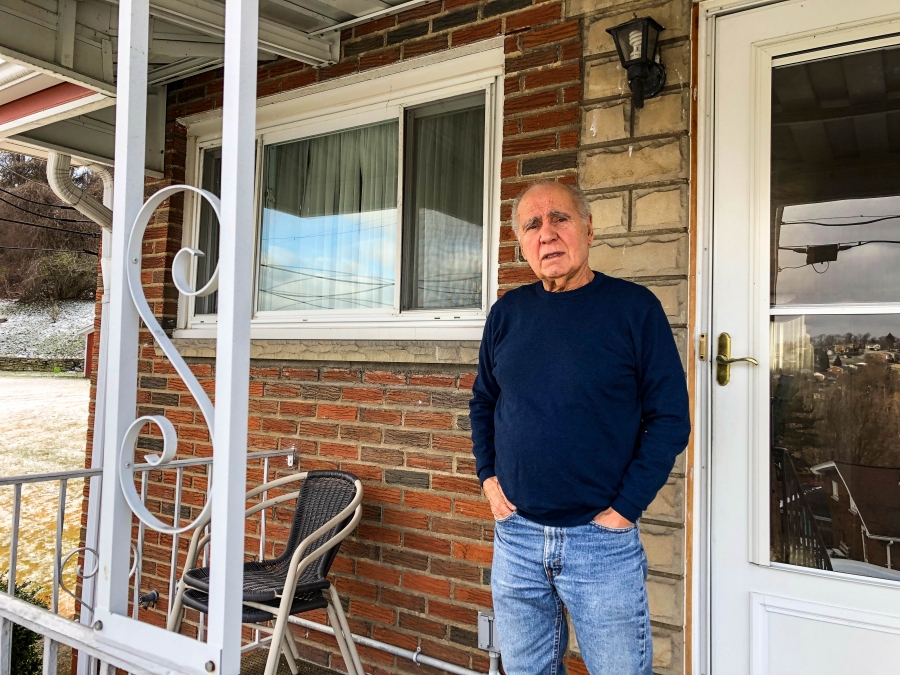 Former mayor of Monessen, Pennsylvania, Lou Mavrakis, a Democrat, says he knows President Donald Trump was promising people in his city more than could be delivered. But Mavrakis says he has no regrets inviting then-candidate Trump to come speak in his community.

Elias says her frustration goes beyond unfulfilled promises — she says the president has set a dangerous mood in the country. “People are attacking each other. I mean, it's like road rage 10,000 times over.”

In 2017, voters elected a 26-year-old high school band teacher as their new mayor. Since Democrat Matt Shorraw took office, things have turned ugly in Monessen. Shorraw began his term by investigating alleged ethics violations by the previous city council and mayor. Shorraw says he’s been harassed and threatened to stop his work at City Hall.

“Then, they changed the alarm system code so that I can't enter the building,” Shorraw says.

A city council member also publicly urged people to go to Mayor Shorraw’s home with pitchforks and hog-tie him.

Shorraw hasn’t attended a city council meeting since last May.

Now, obviously President Trump isn’t involved with the local political scene in Monessen. But Shorraw says the commander-in-chief has set a tone.

“He's kind of leading by example where people feel that it is OK to do these kinds of things and throw protocol and ethics out the window entirely, and in some cases, legality out the window,” Shorraw says. 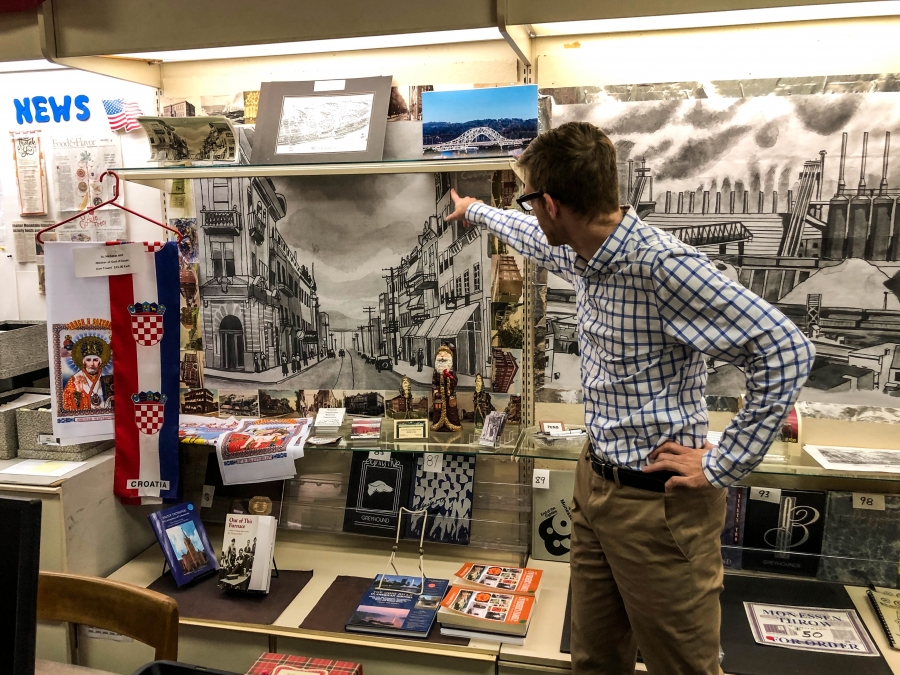 Still, a lot of people here view the president quite differently.

“I voted for Trump,” says Bill Hans, a contractor and lifelong Democrat.

But what about Trump’s promises to help Monessen, or the Mon Valley? Hans says, “You can only do so much."

"I think he’s got more issues to worry about than the Mon Valley, that's what I think,” Hans says. “I just think he has too much on his plate to worry about what goes on in the Rust Belt here.”

Overall, though, Hans says he’s happy with the president.

“He's trying to get the wall, but the Democrats are stopping that, mainly it's Pelosi and Schumer. That’s my opinion. You’ve seen the caravans coming in, the immigrants jumping over the fence and everything like that on TV. That’s crazy. It's crazy. And then they come in, and they take jobs away from people,” Hans says.

Keep in mind, Pennsylvania voted for the Democratic presidential candidate in every election going back to Bill Clinton in 1992. Trump carried the state by just 44,000 votes. It was people like Hans — Democrats — who helped put Trump in the White House.

Some here haven’t forgiven former Mayor Mavrakis, again, a Democrat, for inviting Trump to their city. They felt Trump used their struggling community as a backdrop for touting unrealistic plans that could never materialize.

Does Mavrakis regret his invitation?

“I don't have any regrets,” Mavrakis says. “What did anybody else do for us? Nobody has done nothing for this community for 28, 30 years. Whenever you're in my situation, what would you do? I'd ask you the same damn questions. Would you say, 'Don't come here Trump, don't come here Hillary Clinton?' We're going to continue to die on the vine the way we are. I'm trying to do something.”