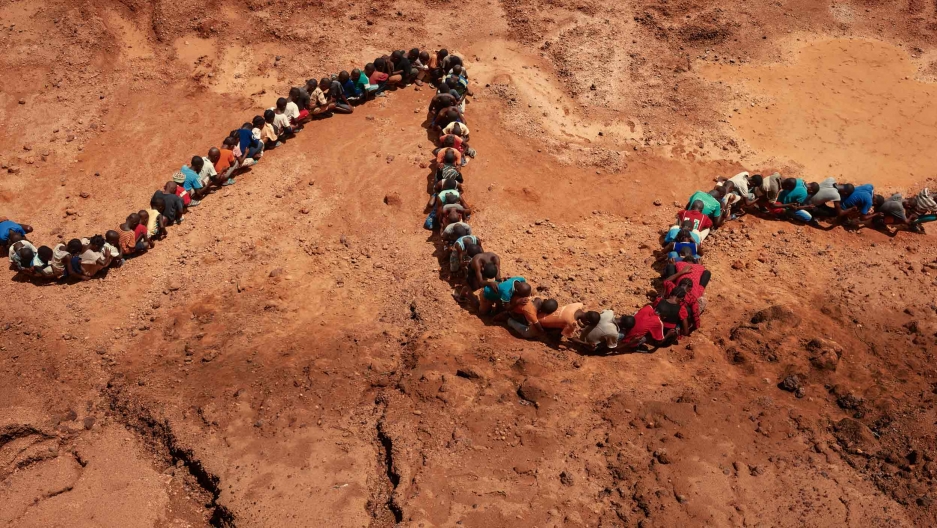 This photo from the book "Congo Tales" is called "The Rainbow Python."

A new photo book offers an intimate glimpse into the lives of people who live in the Congo Basin.

"Congo Tales: Told by the People of Mbomo" tells 24 different myths illustrated by photos by Pieter Henket. The photos, a combination of re-enactments of the stories and portraits of the Mbomo people dressed as characters from the tales, paint a rich visual of the legends.

Related: Excerpt: 'The Mole and the Sun' from 'Congo Tales'

Host Marco Werman spoke with French Congolese artist Steve Regis "Kovo" N’Sondé and Dutch film producer Eva Vonk about how the Congo is understood and misunderstood by those outside the country. 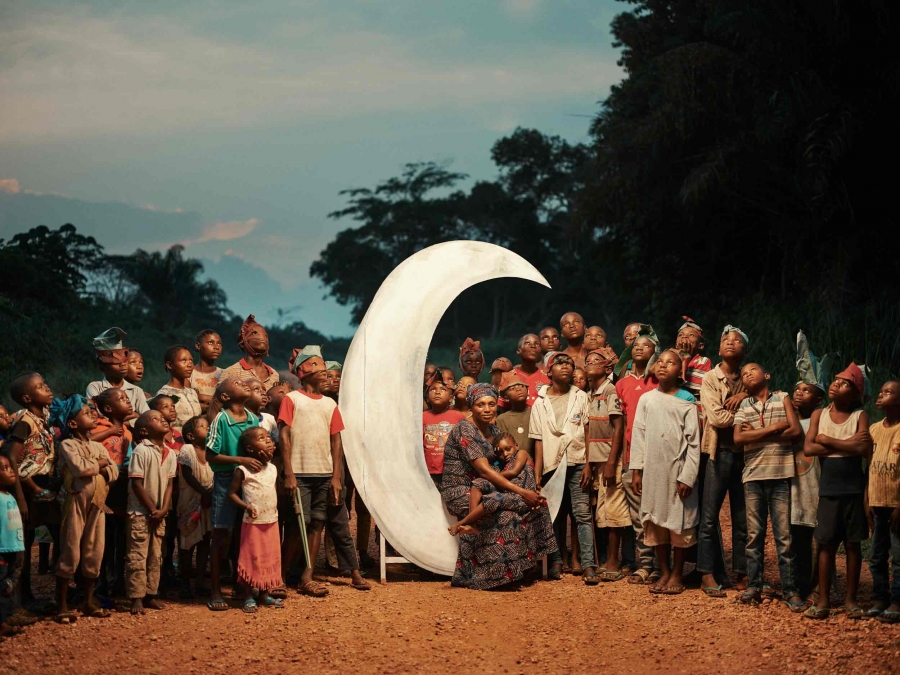 "The Woman on the Moon"

Eva Vonk: Slowly, but surely, they started to deliver handwritten notepads filled with old mythologies and fables and with these, we eventually ended up working together with Galva for the adaptation of these stories and also working towards creating a more complete sense of the stories —

Steve Regis "Kovo" N’Sondé: — and other tales from my own family background because my father is a storyteller. I grew up with some of these tales which are in the book. People are aware of the importance of the preservation of their culture, of our culture. Some tales were so old that some things were missing or researchers made this little mistake to translate everything, even the names of the plants, of the animals, but to give the Congolese people and the whole world the real dimension of these tales, the key animals and the key symbols have to stay in African language. It can be Lingala, it can be Kikongo ... my aim was to give each tale the power and the deepness it deserves.

The World: Eva, you and your team came up with the idea of taking the portraits of the villagers of Mbomo as they were acting out these proverbs or myths or fables and you are using large format cameras, studio backdrops. Why this approach?

Vonk: I didn't come up with, "Wow, if we don't document these stories now they will perish." It came to me when I was there once, and it was a lightning storm and it was a tree that got hit by thunder. It fell down and all the people around it gathered and they started telling stories because apparently, the tree was very important because it was next to one of the former huts of one of the founders of Mbomo. And these stories and how they were told eventually came to this quote: "That when an old person dies here, it is as if a library of stories burns away."

It was such a beautiful moment of how these people all gathered and started telling these stories and from this quote, this inspiration really came. OK, how can we work together? How can we document these stories? What would be an interesting way? How could we juxtapose two worlds that normally don't function together and how could we find a way to make them function together for a cause?

N’Sondé: I saw the quality I think in myself. Yes, these people want to do it with the maximum of quality, technical, but also human. So, I said to myself, "OK, I will trust these people and I will go with them in Congo." For me, it was the first time in my life I've been in Congo. In my country with so much white people, but it was wonderful.

'My aim was to give each tale the power and the deepness it deserves.'

As high quality as the work is and as sincere as your intent was, Eva Vonk, it was your idea as the outsider, right? So, do you think you presented this idea, "We'll have you dramatize these fables in photographs." Do you think they were really in any position to say, "No, we don't like that idea?"

Vonk: I spent a lot of time there, and the idea didn't just occur to me ... I really tried to listen and understand the stories, and then came to this conclusion of what do we use this platform for when we take these pictures in this specific setting in this specific context with this specific technology. We usually used it for selling things or commercializing things or making someone who is famous even more famous. It was a very organic way of just coming together, and it's really been a team effort. So, I don't think that it was so much imposed as to kind of collaboration.

N’Sondé: It's important to underline that, of course, people are aware of the necessity to preserve their own culture that they don't wait for the right white person with technology to do so.

It does sound like some of the villagers thought you were all a bit crazy when you proposed this idea — you kind of said it — a white European idea. Am I right?

Vonk: I had many times that I thought, "Wow, a hundred women in a line with a fire torch? Are they going to come? Are they going to want to do that?" And then, eventually 150 women showed up, happy to make this part of this one story to kind of document it, and it became bigger and bigger. And then when we came back, of course, to give the Lingala version of the book, there we really got of this feedback that "Wow, we thought you were crazy, but there is a book now and we read the stories in the book and kids want to go to school so they are able to read also the stories in the book."

N’Sondé: Even I, I grew up in this culture. I studied this and, of course, I learned about the terms from northern Congo but it was a lot of trust and a lot of responsibility for me. One of the storytellers there allowed me to make an adaptation of the story of his grandfather. When we went back to shoot the exhibition in Mbomo, I print the adaptation, I gave it to him and I remember, he reads silently what I wrote and after he said to me, "C'est bon." It was like a lot of trust, a lot of responsibility.

Vonk: And I think, I just want to add something to that about collaboration, because there are two worlds that are coming together. ... It wasn't one party really very much telling the other party how to do that. It was really, "How are we going to do this together?" 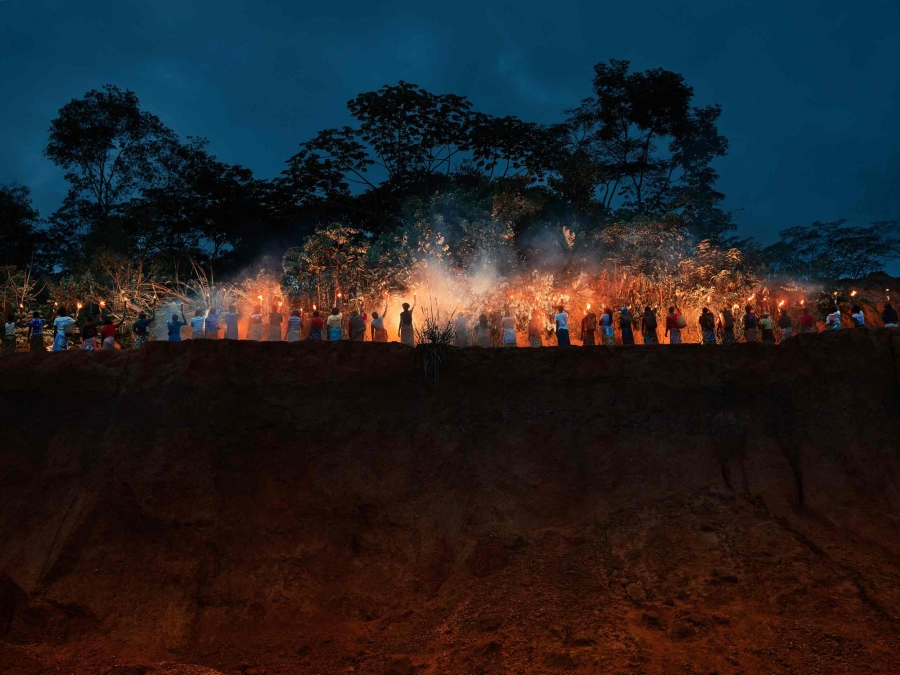 This photo from "Congo Tales" is titled, "Thursday."

"Congo Tales: Told by the People of Mbomo" was edited by Stefanie Plattner and Eva Vonk. The Congolese mythologies were adapted for Congo Tales by Steve Regis "Kovo" N’Sondé and author Wilfried N’Sondé. Read an excerpt from the book here.