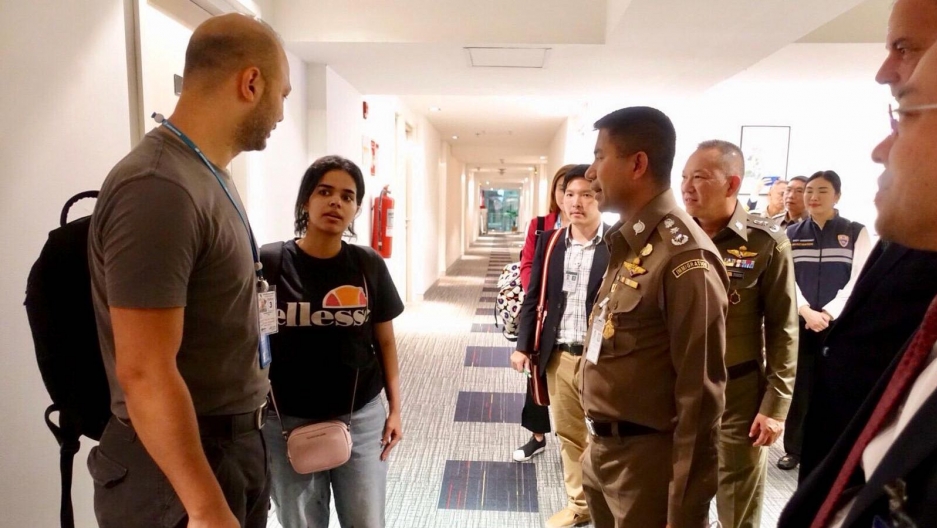 Saudi teen Rahaf Mohammed al-Qunun is greeted by Thai immigration authorities at a hotel inside Suvarnabhumi Airport in Bangkok, Jan. 7, 2019.

Editor's note: The Associated Press reports Rahaf Mohammed al-Qunun has been allowed to enter Thailand temporarily under the protection of UNHCR. She said she plans to seek asylum in Australia.

Here’s what we know about Rahaf Mohammed al-Qunun, the 18-year-old Saudi Arabian woman whose attempted escape from her orthodox family has riveted much of the world: Her full passport details. Her student ID number at the University of Ha’il, located in the kingdom’s northern hills. Her overwhelming fear that her family will torture her — or worse — for denouncing Islam if she is returned home.

She has posted all of this deeply personal information to Twitter from inside a cramped hotel room in Bangkok’s main international airport. That is where she has been holed up, defying Saudi Arabia’s orders for her to return home.

Qunun was en route to Australia, which has already issued her a visitor’s visa, in a plan to break free from her family. But she only made it as far as a transit stop in Bangkok. At the airport, Thai authorities, in cooperation with Saudi Arabia, began proceedings to send her back.

But Qunun deftly turned to Twitter, broadcasting intimate details of her life so that she would not be forgotten — along with documents, videoed pleas for asylum and even evidence of family death threats, including a screenshot in which her “cousin,” she says, is vowing to “slaughter” her.

I’m being threatening by my cousin that I will be slaughter. pic.twitter.com/w6iG5XmPst

This was posted in hopes of turning her escape into a global cause du jour. It worked. The world’s media — as well as ambassadors and rights organizations —turned their gaze to her airport hotel room, where she barricaded the door with a chair and a mattress.

Qunun has ample reason to be afraid. Apostates who renounce Islam can indeed face the death penalty in Saudi Arabia. Speaking of her family, she posted that she’d “been threatened to be killed before, and they aren’t afraid to threaten me in public.”

Her situation feels especially worrisome in the wake of Saudi Arabian author Jamal Khashoggi’s murder inside the kingdom’s embassy in Turkey — a killing that underscored the lengths to which Saudi agents would go in pursuing dissidents. That scandal has had extraordinary ripple effects, including drawing added scrutiny to Saudi Arabia’s brutal US-backed war in Yemen.

Despite Qunun’s pleas for help, Thailand initially went forward with proceedings that would send her back to the Middle East. The country’s top immigration official, Maj. Gen. Surachate Hakparn, said that she’d arrived at the airport “without a guardian” and that if her passage into Thailand was allowed “she will be unsafe during her stay.”

Of course, 18-year-old women who aren’t citizens of extremely patriarchal Gulf states breeze into Thailand on holiday all the time. But this official’s statement clicks with a larger pattern.

Thai officials, generally speaking, will cooperate with other authoritarian states if they request the extradition of dissident citizens. In December, Thai authorities detained a Bahraini football player who’d left his home country after going public with views critical of his government.

Thailand has previously returned Hmong refugees back to Laos and Uighur migrants back to China — even as rights organizations warned these groups could face abuse upon returning.

Still, Qunun’s fate remains unclear. United Nations officials appear to have finally visited her at the airport and — according to Surachate, the immigration chief — “now we are consulting with UNHCR,” which is the UN’s refugee agency.

Hey I'm Rahaf. My father just arrived as I heard witch worried and scared me a lot and I want to go to another country that I seek asylum in
But at least I feel save now under UNHCR protection with the agreement of Thailand authorities. And I finally got my passport back🙏🏻❤️ pic.twitter.com/pQER7HDVi7

If Qunun does eventually gain the asylum status she seeks, it will be thanks in large part to her own savvy tweets, which turned her obscure struggle into a massive media event.