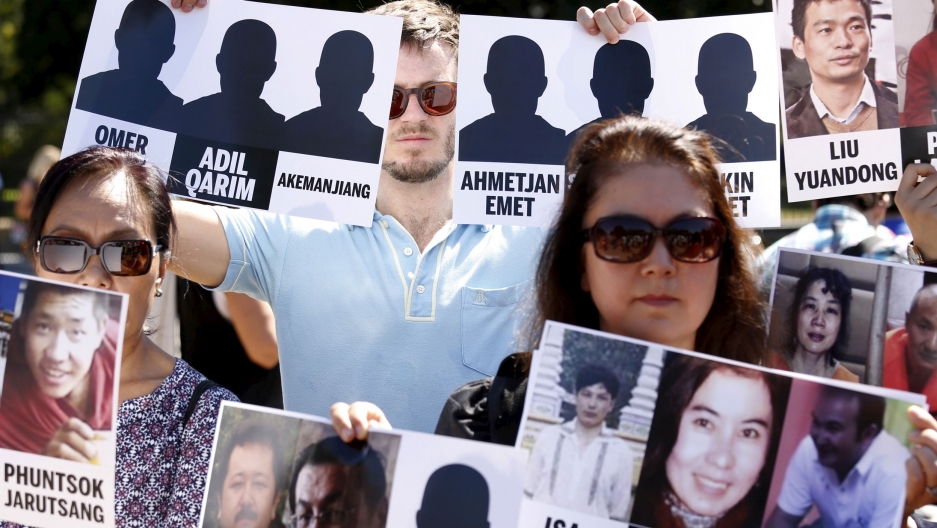 Tibetan, Chinese, Uighur and American activists rally outside the White House in Washington, DC in September 2015 to ask then-President Barack Obama to publicly call on Chinese President Xi Jinping to halt the crackdown on Tibetans and Uighurs. Uighurs plan to demonstrate on Dec. 20, 2018 in Washington, DC to draw attention to UN reports of "concentration camps" in China.

Aydin Anwar has family in China that she’s never met — family she hasn’t heard from in a long time.

That’s because they’ve been missing for years.

And no one seemed to be paying attention, until this past summer.

The UN estimates China could be holding as many as a million Uighurs, who are predominantly Muslim, in camps.

“Survivors of the camps have described their experiences as a deliberate attempt by Beijing to strangle Uighur culture and stamp out the Muslim faith,” Vice President Mike Pence said in an October speech.

The Trump administration is considering sanctions against China for human rights abuses.

China has denied those allegations but the many Uighurs across the world who’ve escaped the region are urging international leaders to take action. Like many communities in exile, though, there’s disagreement on what action to take.

Anwar was born in the United States, after her parents won asylum and settled in the Washington, DC, area. Her father has long fought for Uighur rights.

“People in these camps are forced to renounce their faith, adopt atheism and pledge allegiance to the Chinese state as a god,” explains Anwar, whose extended family is still in China. “With lethal injection, forced sterilization, torture, bodies being cremated to destroy evidence. These are all signs of a looming genocide.”

So Anwar, a Duke University student, has thrown herself into activism, with what’s called the East Turkestan National Awakening Movement — East Turkestan is the name many Uighurs call their homeland in China. 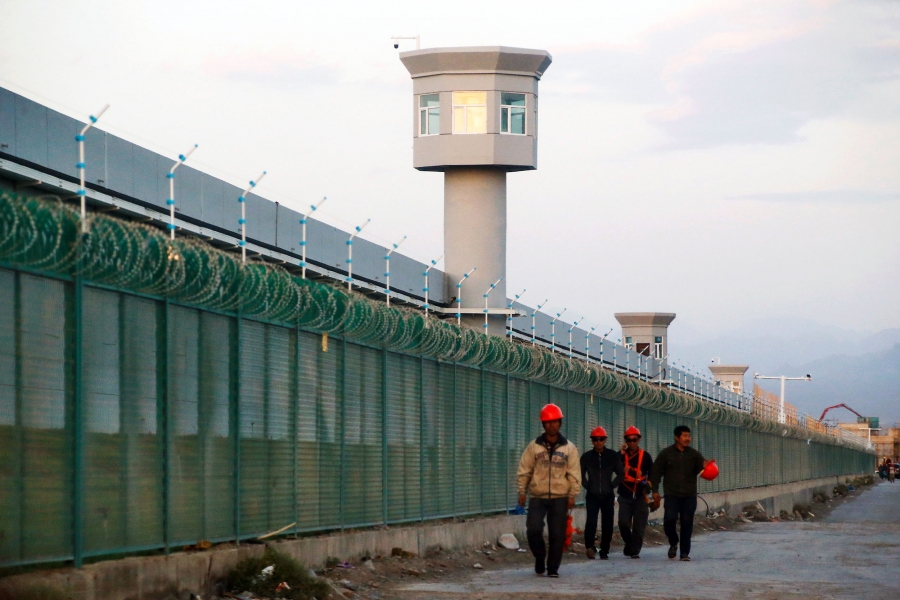 Workers walk by the perimeter fence of what is officially known as a vocational skills education center in Dabancheng in Xinjiang Uighur Autonomous Region, China. This center, situated between regional capital Urumqi and tourist spot Turpan, is among the largest known ones, and was still undergoing extensive construction and expansion in September 2018. The UN has reported that the Chinese government may be holding as many as 1 million Uighurs in camps.

Salih Hudayar started the movement last year. He says he has more than 80 relatives missing.

But calling for independence is controversial among older, established Uighur groups.

“They say it’s unrealistic,” he says. “Or that the international community will stand against it, the US will oppose it — which is nonsense.”

The disagreement is causing a split. The new group has been shunned by established Uighur organizations.

“The fact that they weren’t willing to work with us is what caused us to come out as a different organization,” Hudayar says.

Ilshat Kokbore is the president of the Uyghur American Association. He says older generations of the Uighur diaspora have already tried many different ways of approaching China.

“You can’t do anything else,” Kokbore says. “We know that. We tried all other means. It didn’t work.”

Kokbore came to the US as a refugee in 2006. Everyone wants independence, he says, but first, there are priorities.

“We want first to save these people from the concentration camp,” he says. “They need to be alive.”

He says he hasn’t heard from his sisters or his mother for three years now.

“It’s unbearable,” he says. “I want my government to find out at least where is my mother?”

Kokbore is grateful for the efforts of US politicians. He calls GOP Sen. Marco Rubio “his personal hero” for demanding investigations of Uighur camps.

#China is carrying out an ethnic cleansing campaign. Hundreds of thousands of #Uighurs in #Xinjiang region have been imprisoned in camps. It is an additional outrage that so far the reaction of the “international community” has largely been silence. https://t.co/SyjWe0PNno

But Kokbore says so far there’s been no action, and that sends a signal to Beijing.

The younger Uighur group wants the US and UN to label what’s happening in China as genocide and send in peacekeepers. They’re planning to demonstrate in front of the White House on Thursday, Dec. 20, to mark the anniversary of the day in 1949 when Uighurs say China occupied their homeland.

Anwar, the Duke student, says she’s glad there is greater awareness among Americans after the news reports from the summer. She wants them to know why Uighurs have fought for freedom, for so long.

“I’m still trying to be grateful and use the voice that’s been given to me and the freedom to speak out for the people who are being blocked off from the entire world and being ignored and slowly put to death,” Anwar says.

Anwar says she’ll play her part, just like her dad did.