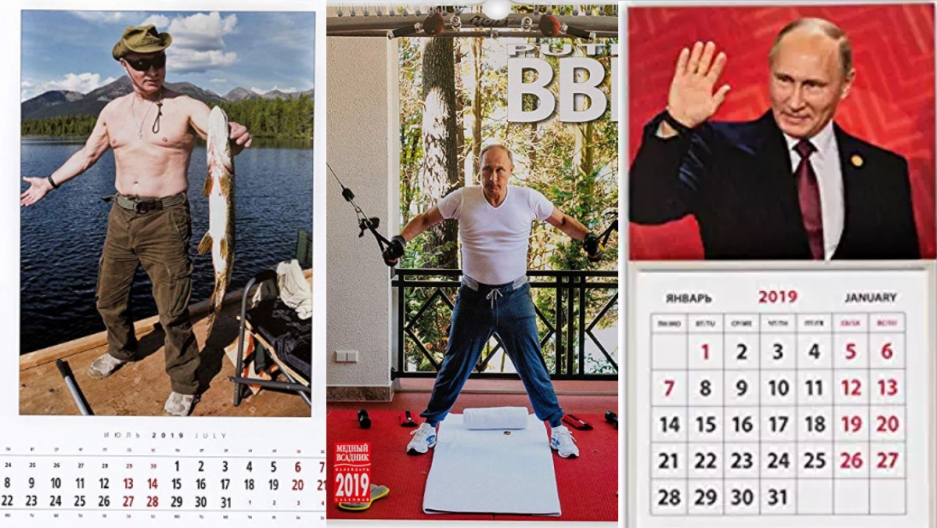 Vladimir Putin 2019 calendars are on display for purchase on the internet.

One month, there’s Vladimir Putin topless in the woods with a gun. On the next page, he’s fishing in a white button-down shirt and pants. No, they’re not pictures from the Russian president’s eHarmony page.

They’re from a calendar devoted to pictures of Putin that make him look strong, yet likable.

We have one hanging on a wall at The World’s newsroom, by the way. Our friend Tatyana Ivanova, who is from Russia and asked that her full name not be used, was surprised to see the Putin calendar hanging by our studio door when she came to visit a few months back. 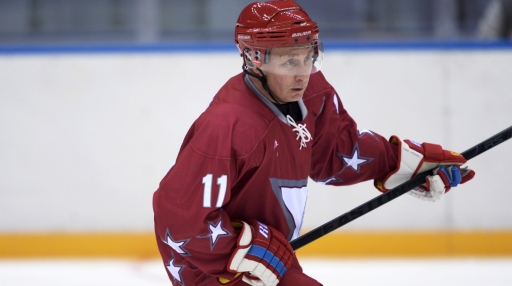 People in Moscow usually put up calendars and portraits of Putin in the office as a joke, Ivanova explains.

But in some parts of Russia, mostly in rural regions, people are completely serious about it.

Putin is almost like a religious icon there. “They really feel that Vladimir Putin’s a powerful man,” Ivanova says.

It’s not easy to figure out where these calendars are produced. They're mostly sold on eBay and Amazon by online vendors based in Russia.

One eBay seller says that Putin calendar sales spike after media coverage, which is no surprise. Western media like CNN, for example, loves to feature these calendars every year.

One place you won’t find these calendars is at Books & Arts in Brookline, Massachusetts.

It’s a small bookshop filled to the brim with Russian books, hand-painted matyroshka dolls and traditional blue and white gzhel pottery. Mirra Kuznetsov, the shop owner, sits at her computer by the front door. She has jet black hair and glasses.

She didn’t know these calendars existed in the first place. She laughs at the thought of the Russian president holding kittens and puppies, or looking ‘manly.’  But she doesn’t find Vladimir Putin funny at all. 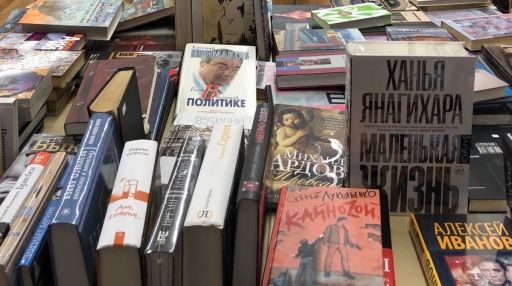 When Kuznetsov thinks of him, she thinks of the Kursk submarine disaster of August 2000.

It brings her back to her New York apartment, where she watched the news unfold on TV of the Russian navy’s submarine sinking to the bottom of the Barents Sea. Several days passed before Putin — president at that time, too — accepted international help to save the men onboard.

“We were watching every day and every hour. We were expecting that he would save them because so many countries were asking him to save the people [trapped inside],” Kuznetsov, who left Russia in 1992, says. “He didn’t allow anybody.”

The Russian government received a lot of criticism and Kuznetsov says she could never forgive Putin after that incident. “Since that time, I thought, human life, the main treasure in our lives, it’s nothing for him,” she says.

That’s why the calendars seem ridiculous to her. It reminds her of the way Russian state media tries to make Putin look like a "man of the people."

But outside Russia, it seems a lot of people see the calendars differently. Again, like a joke. In Japan, for example, this year’s Putin calendars are outselling calendars featuring local celebrities.

It could also be that there is a nostalgia cropping up for "strong man" figures around the world. After all, in Italy, calendars of fascist dictator Benito Mussolini have made a comeback for 2019.

Meanwhile, in Russia, Putin may have some competition this year from former Soviet leader, Joseph Stalin. Calendars of Stalin are suddenly in demand again. And that’s definitely not a joke.