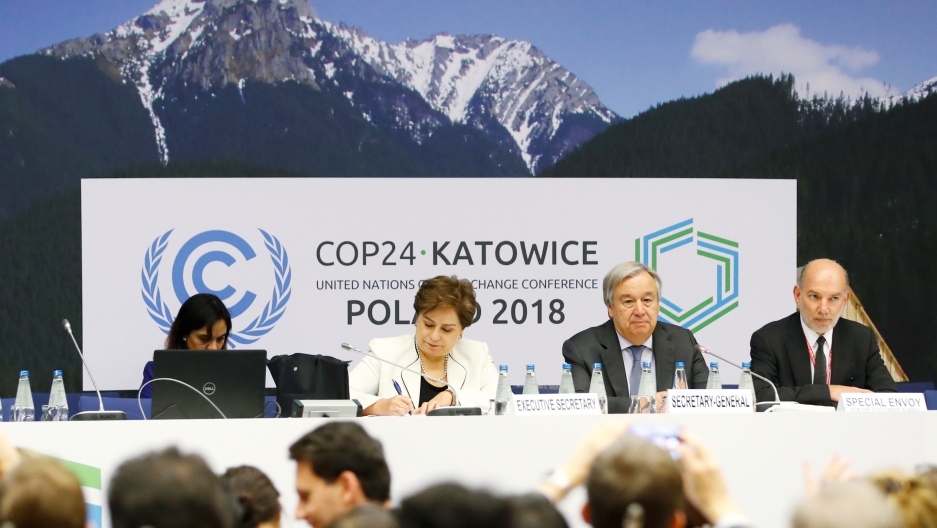 The latest National Climate Assessment, assembled by 13 federal agencies, expressed the most serious warnings yet about the current climate impacts in the US and the likely scenarios in decades to come, yet the administration that created it seems to be doing its utmost to act contrary to its findings.

Since the report’s release, the administration has advocated at the UN climate meetings in Poland for increased use of fossil fuels and announced plans to ease Obama-era rules aimed at limiting carbon emissions from coal-fired power plants.

All 13 federal government agencies that participated in the report are members of the US Global Change Research Program created by Congress in 1990. Many outside experts also contributed and the report was reviewed by the National Academy of Sciences.

According to Harvard professor John Holdren, the chief science adviser to President Obama who also oversaw the work behind the 4th Climate Assessment until President Trump came into office, none of the agencies or other participants requested any changes to the report.

“It's to be admired that they elected not to try to change the content,” Holdren says.

And to the surprise of many observers, the White House made no effort to intervene or water down the report’s conclusions. But that may not be the case next time: EPA administrator Andrew Wheeler, a former coal lobbyist, has indicated he is not happy with the report and may intervene in the future.

On the flip side, Holdren wonders whether we may be approaching a tipping point at which public concern over the effects of climate change could force policy changes.

There's going to come a tipping point where the public's demand for action is going to become irresistible.

“Each additional report is a weakening of the administration's position and, ultimately, it's going to have to topple,” Holdren says. “There's going to come a tipping point where the public's demand for action is going to become irresistible. I don't know exactly when that tipping point is going to happen. But what we're seeing is report after report, each one more dire than the last, about what climate change is already doing and what it will do.”

What’s more, he says, the report reinforces what people are already experiencing in their own lives: unprecedented wildfires in the West; damaging droughts in the Southwest; record-breaking rains and flooding along the East Coast.

“What people are experiencing and what they're seeing on their TV screens and on their computer screens and on their iPads all are converging to send the message that this is real, it's damaging, and it's going to keep getting worse until we take very serious action to address it,” Holdren says.

Ultimately, he believes, those convergences and the fact that the incentives to act are getting bigger and the remedies are getting cheaper will result in demand from voters for new policies aimed at curbing climate change.

Holdren comes to this issue from a unique place: He wrote his first articles about climate change in 1969.

In 1969, it was already becoming apparent that we were headed in a very dangerous direction.

“At that time, it was already becoming apparent that we were headed in a very dangerous direction,” he says. “There were many others pointing out early on how dangerous the additions of greenhouse gases, of heat-trapping gases to the atmosphere, would become. Scientists have known about it for a long time. But there has been until recently, very little action.”

Holdren is dismayed to see nearly all of President Obama’s actions on climate change being undone by the current administration.

“Trump is trying to reverse everything Obama put in place about emissions reductions, about adaptation, preparedness and resilience,” Holdren says. “And we are losing time that we cannot afford to lose. ... We’re now so far down the track toward truly disastrous climate change that it's going to take Herculean efforts to avoid catastrophe.”

He sees some cause for optimism in America's Pledge movement: Twenty-two states, hundreds of cities and universities, more than 1,000 businesses and many civil society organizations have joined together to pledge action to meet the commitments the US made in the Paris climate agreement.

Holdren would advise the incoming House Democrats to legislate some changes that will slow the accelerating pace of emissions. He says three major things are needed:

First, a price on carbon that escalates over time; second, a large increase in funds for research and development and demonstration of advanced energy technologies, which will help the US reduce its emissions even more deeply; third, a variety of measures making adaptation, preparedness and resilience mandatory across the government's departments and agencies.

“President Obama issued executive orders that required every department and agency in the federal government to take climate change adaptation, preparedness and resilience into account in every program, every project every budget,” Holdren notes. “Trump has rolled all that back. Congress should put it back again.”

Seventy percent of  Americans agree that climate change is real ... but there is still not the sense of urgency which would compel action.

Holdren would also like Congress to boost efforts at climate change education.

“We need a public that understands more thoroughly how serious this problem is,” he says. “Seventy percent of the Americans agree that climate change is real, it’s caused by humans, it’s damaging [and that] the federal government should do more about it. But there is still not the sense of urgency which would compel action.”

The Obama administration had also begun working with medical schools, nursing schools and schools of public health on the public health impacts of climate change. It worked with the National Park Service to provide materials on how climate change is affecting our national parks.

“We should be doing all that and more to educate the public,” he maintains. "And Congress could insist that that needs to happen.”