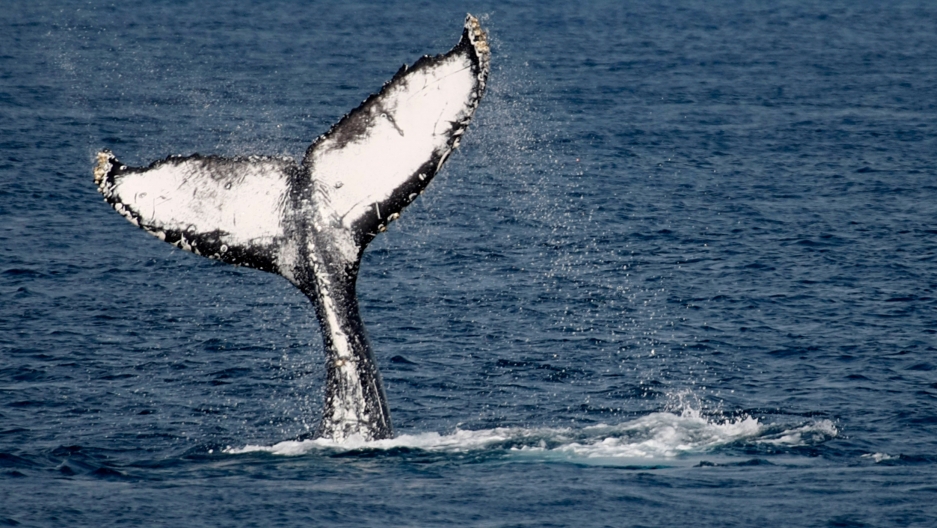 A humpback whale slaps its tail on the surface of the water off the shore of the southern Japanese island of Okinawa.

Following an announced withdrawal from the International Whaling Commission (IWC), Japan said on Wednesday it plans to resume commercial whaling starting in July in its waters and exclusive economic zone while ending its controversial hunts in the Antarctic.

Australia and New Zealand welcomed the decision to abandon the Antarctic whale hunt, but expressed disappointment that Japan would engage in any killing of the ocean mammals.

The decision, some experts said, allows Japan to save the money it spends to support Antarctic whaling while taking a tough pro-whaling stance — a matter of national pride for some conservatives.

But doubts exist about whether Japanese commercial whaling can be economically viable, especially as fewer people than ever are eating whale meat, they said.

"From July 2019, after the withdrawal comes into effect on June 30, Japan will conduct commercial whaling within Japan's territorial sea and its exclusive economic zone, and will cease the take of whales in the Antarctic Ocean/the Southern Hemisphere," Chief Cabinet Secretary Yoshihide Suga said in a statement announcing the decision.

Japan, which says most whale species are not endangered and that eating whale is part of its culture, has long campaigned without success for the IWC to allow commercial whaling.

Some influential lawmakers' constituencies include whaling communities, and Prime Minister Shinzo Abe's election district is home to the whaling port of Shimonoseki.

The decision to withdraw from the IWC followed its latest rejection of Japan's bid to resume commercial whaling at a September meeting, which Suga said showed it was impossible to bridge the gap between whaling advocates and anti-whaling members.

The resumption of commercial whaling is an unusual decision for Japan, which stresses multilateralism in its diplomacy, and it sparked swift criticism from environmental groups and others who believe all whales should be protected.

"The declaration today is out of step with the international community, let alone the protection needed to safeguard the future of our oceans and these majestic creatures," international conservationist group Greenpeace said.

"The Japanese government needs to recommit to the IWC and prioritize new measures for marine conservation."

"It's not like we are turning our back on the IWC and abandoning international cooperation," she said. "There is no change to our country's respect for the rule of law and multilateralism."

New Zealand Foreign Minister Winston Peters welcomed Japan's decision to halt Antarctic whaling but said he was disappointed with the decision to resume any commercial whaling.

"Whaling is an outdated and unnecessary practice. We continue to hope Japan eventually reconsiders its position and will cease all whaling in order to advance the protection of the ocean's ecosystems," Peters said in a statement.

Australia urged Japan to return to the IWC.

Japan has long defied such protests to conduct what it calls scientific research whaling, having repeatedly said its ultimate goal was to whale commercially again.

In 2014, the International Court of Justice ruled that Japan should halt its Antarctic whaling.

Japan suspended its hunt for one season to re-tool its whaling program with measures such as cutting the number of whales and species targeted, but resumed hunting in the 2015-2016 season, capping its Antarctic catch with a quota of 333 whales annually.

Japan began its so-called scientific whaling in 1987, a year after an international whaling moratorium began. Its aged whaling mothership is in need of a costly replacement or refit.

Much of the meat ends up in shops, even though most Japanese no longer eat it. Whale consumption accounted for 0.1 percent of all Japanese meat consumption, according to the Asahi newspaper. That works out to 35 grams per person per year, according to a whale meat shop owner Koichi Matsumoto.

"We ate whale meat in the old days but there are lots of other things to eat now," said a 75-year-old woman shopper.

"But if we don't explain internationally that whales are increasing ... people won't understand," she added.

The ever-dwindling demand means an uncertain outlook for Japan's whaling.

"It could persist as a small-scale activity. There are still whale meat restaurants and I think some people will keep eating a small quantity," said Yoichiro Sato, a professor at Ritsumeikan Asia Pacific University.

"(But) if it's too expensive, people will not eat it. As an industry, its prospect is very grim."

By Linda Sieg and Kiyoshi Takenaka/Reuters