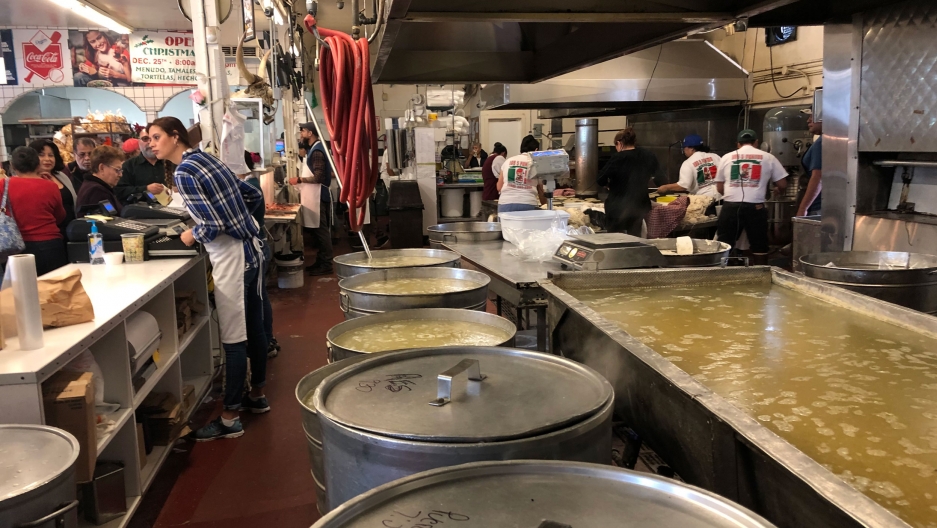 Customers wait to buy tamales for their holiday gatherings at the Los Cinco Puntos Market in LA’s Boyle Heights. Some customers order as many as 50 dozen — 600 — tamales.

At the bustling Los Cinco Puntos Market in LA’s Boyle Heights neighborhood, you can buy all kinds of traditional Mexican ingredients and foods, from carne asada tacos and cheese tamales to dried chiles and herbs.

But during the holiday season, co-manager Frank Brito says it’s pretty much all about the tamales.

Related: The Brazilian Christmas dinner is incomplete without this dish

If you haven’t had a tamale, let’s review the culinary basics.

Although recipes can differ, it’s usually a filling wrapped in a thin layer of cornmeal dough called masa, which, in turn, is wrapped in either a corn husk or sometimes a banana leaf. All of it is then steamed.

The heart of the tamale, the filling, can be pretty much anything. 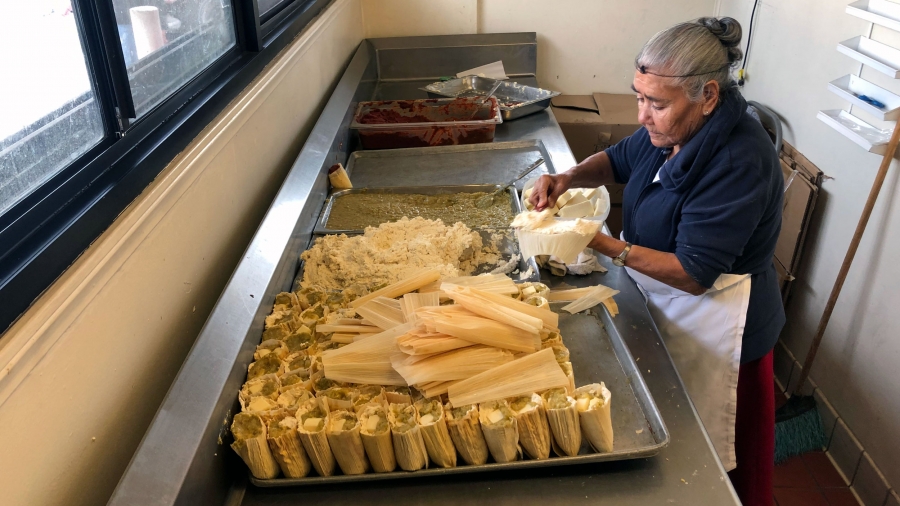 A woman assembles green chile and cheese tamales for the holiday rush at Los Cinco Puntos Market in LA’s Boyle Heights. First, she fills the corn husks with masa and the filling and then the tamales are steamed.

Tamales have been a staple of Mexican cooking for centuries, dating back to the Mayan and Aztec civilizations.

From Mexico, tamales spread to the rest of Latin America and to the United States when they were introduced at the 1893 World’s Fair in Chicago.

Tamales have also become a dish associated with Christmas and New Year celebrations.

That’s how Frank Jimenez, who is standing outside Los Cinco Puntos with a couple dozen tamales, remembers it.

“Well it was tough growing up in a Mexican heritage,” Jimenez says. “[We] didn't have presents and all of that. So the only thing was the tamales. That's what we had to unwrap.”

Related: For this Venezuelan, Christmas isn't Christmas without hallaca

“It's actually a bonding experience for families,” Rodriguez says. “It's a longstanding tradition for many families to get together during the holidays. They call it the ‘metotte,’ — the gossip session.” 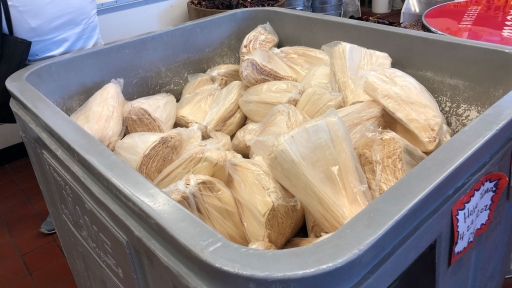 Corn husks are also for sale at Los Cinco Puntos Market for those who want to make their own tamales.

In neighborhoods like Boyle Heights, many people who’ve moved elsewhere return to the community to buy their tamales, says Frank Brito, the market co-manager.

“People move away from East LA and they come back,” Brito says as a customer who used to live nearby and moved to San Bernadino walks out. “They used to live down the street. They bought their masa and stuff here for all the years and now that they move away, they come back and continue buying here."

But in an increasingly diverse and gentrifying Los Angeles, where people pick and choose their culinary traditions, tamales have also become popular with non-Latinos, says Maria Cano, who’s come to buy tamales for her office.

“They’re everywhere now,” Cano says. “We have little restaurants in the downtown area that sell tamales — of course, they triple the price. So that's the challenge.”

And those restaurants cater to a hip crowd, Cano laughs.

“Yes, hipsters big on the tamales and a lot of them are big on the Latino culture,” she says.

Editor’s note: Reporter Saul Gonzalez always stands in line at another well-known tamale place in Boyle Heights called La Mascota. He ordered 24 tamales for his own family holiday. He got chicken with green chiles and he eats them with sour cream on the side. "Whatever your background or tradition or custom, this is just delicious," he says.