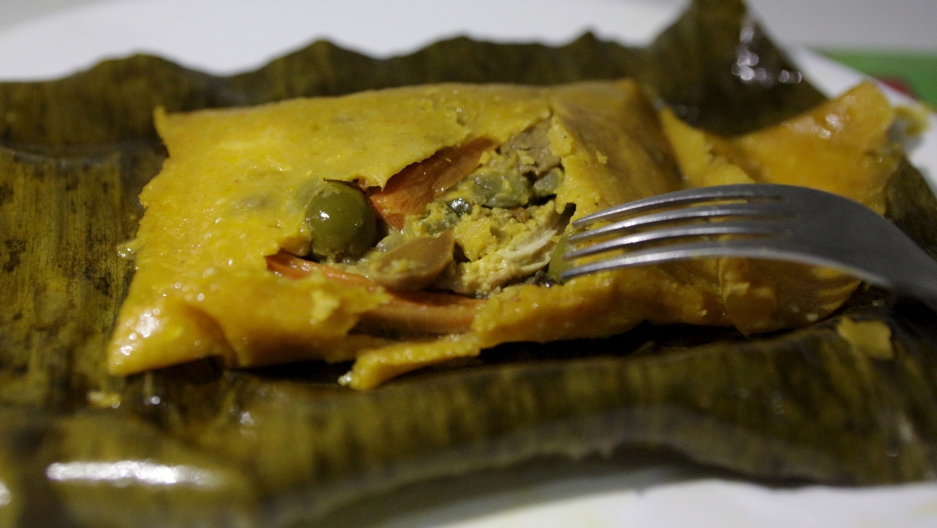 Hallaca is a typical Venezuelan dish made out of cornmeal and stuffed with beef, pork, chicken, raisins, capers and olives and then wrapped in a banana leaf and traditionally served on Christmas and New Year's Eve.

It's that time of year when many Americans turn to time-honored traditions of Christmas carols, eggnog and kissing under the mistletoe.

In our search for holiday traditions outside the US, we came across a Venezuelan tradition: Hallaca.

Resembling tamales, hallaca is a staple of Venezuelan Christmas.

It's only made during the holiday, says Juan Freitez Mora, a Venezuelan documentary filmmaker. Preparing it is an all-day affair.

By tradition, family and friends gather in the morning to chop and prep the ingredients — including banana leaves. The leaves are brought in from fields with bird droppings and other contaminants, so they must first be soaked and cleaned.

"That was my job," says Mora, of the chore handed to the youngest member of his family. "But I was able to get away with a lot of things. I didn't like washing them, so I only did 10 leaves and then ran off and played with friends," he admits, with a laugh.

Pork, chicken, raisins, olives, capers, onions and pimentos are folded into corn dough, and then wrapped in a banana leaf, says Mora, who now lives in Phoenix.

Mora says he was lucky enough to bring his mother and father to the United States from Venezuela, where living conditions have become tough. "My mom asked me if I wanted to make hallacas [here] and the answer was 'of course.'"

This Christmas, hallaca may be hard to find on tables in Venezuela. Venezuelans are struggling with shortages of basic food items, making many of the hallaca ingredients scarce.

"It's really interesting because it's easier to find the ingredients in the US than in Venezuela, where long lines form to buy the flour," says Mora. "Looking at the bag, [the flour] used to be made in Venezuela and now it says it's manufactured in the US."

We're talking more about hallaca, and all the other wonderful things you can make with banana leaves, in the Global Nation Exchange group on Facebook.