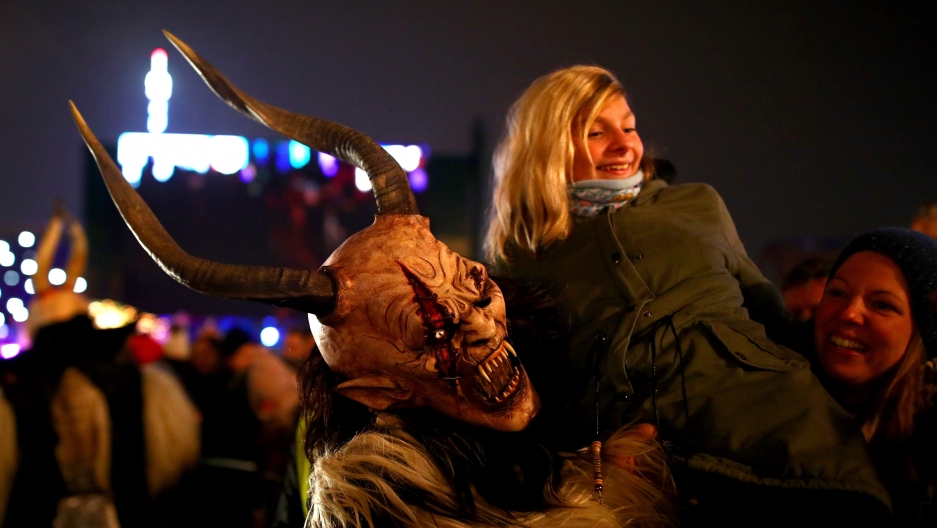 A person costumed as Krampus lifts a young spectator during a Perchten run in Vienna, Austria, on Dec. 2, 2018.

How can a creature so terrifying be so adored? Just ask Austrians at Christmastime, when Krampus comes to play. The half-goat, half-devil is the traditional sidekick of St. Nicholas. He’s known to beat misbehaved children with his bundle of sticks and sometimes, he carries them off in a basket.

But the custom is slowly changing. A teenager might say a Krampus costume includes big goat horns and LED lights for eyes. Older folks remember Krampus as a simple red mask made of paper with a piece of felt as his long tongue. 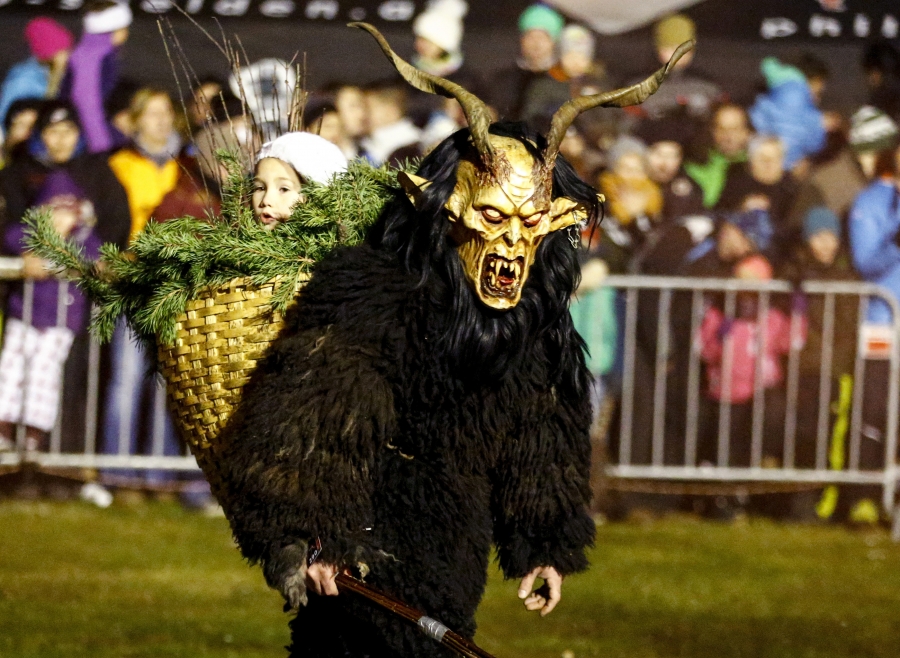 Each year in November and January people in western Austria dress up in Perchten (also known in some regions as Krampus or Tuifl) costumes and parade through the streets to perform a 1,500 year-old ritual.

Krampus used to come door-to-door with St. Nicholas. Now, on the eve of Dec. 4, in the village of Seefeld, a wooden wagon drives into the center of the Christmas market.

At least 10 men dressed as Krampus hop out and begin whooping and whacking the market-goers with sticks. Luckily, no one is surprised. Parents pull little kids closer while high schoolers taunt the Krampuses before running away.

Sarah Weihinger, 15, laughs and gives a little yell as a Krampus whacks the back of her legs.

Related: Have Yourself a Scary Little Krampus

“I find it funny,” she said. “When they’re approaching it’s scary but when they pass it’s OK. I like the masks.”

Weihinger said she goes to Krampus events often during this season. This one is called a Krampus run. Her favorite type of performance, however, is the more modern Krampus show.

“Today, these are the devils of my parents’ time,” she said. “On Friday will be the show, that’s the devils of my time. When they do a show, it explains a story and I find the story interesting.” 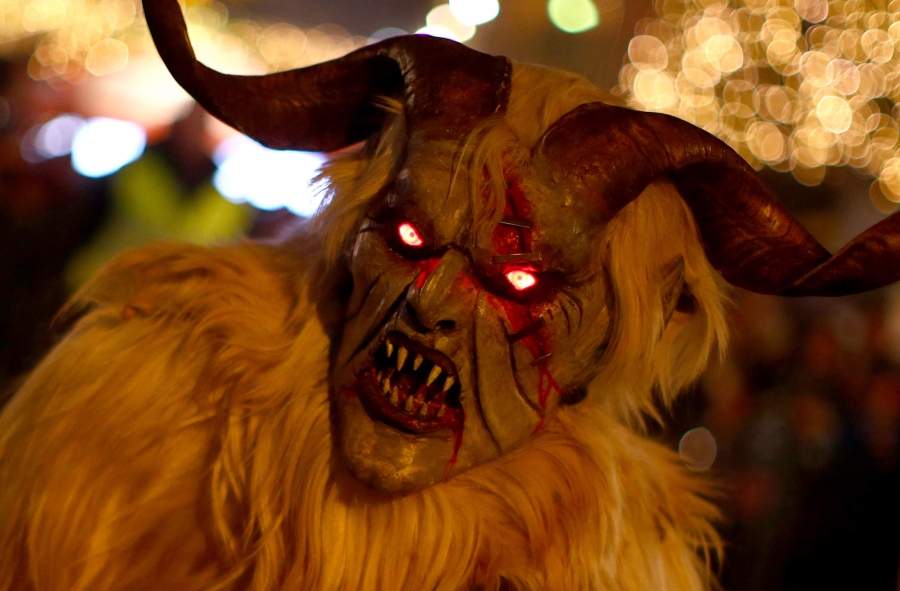 A Krampus with glowing red eyes performs during a Perchten run in Vienna, Austria, on Dec. 2, 2018. Older Krampus costumes were more simple than today's, which often include glowing eyes like these.

A Krampus show feels like a rock concert mixed with a rodeo. Performing groups take to the center of a large ring where they often do tricks with fire to a soundtrack of heavy metal music.

There’s another reason Weihinger likes the Krampus shows better: the Krampuses here aren’t allowed to hit the audience with sticks. Despite the hardcore exterior, Krampus shows attract a lot of little kids.

“In many shows, the Krampus looks wild with big horns and wild masks but he is totally tame,” said Karl Berger, the director of the region’s folk art museum and an expert on the history of Krampus.

Berger has studied the way the custom is changing and believes it has a lot to do with a common myth.

“The pagan history of Krampus is very short because there is none. Krampus is not at all pagan,” he said. “Krampus is a figure that is very strongly connected with Christianity.”

Berger explained that in the 16th and 17th centuries, the Jesuits wanted to increase the number of Catholic converts, especially in regions like Austria, a gateway between Germany and Italy. They created Krampus as a devil figure to accompany St. Nicholas in theater performances, perhaps scaring the audience into conversion. 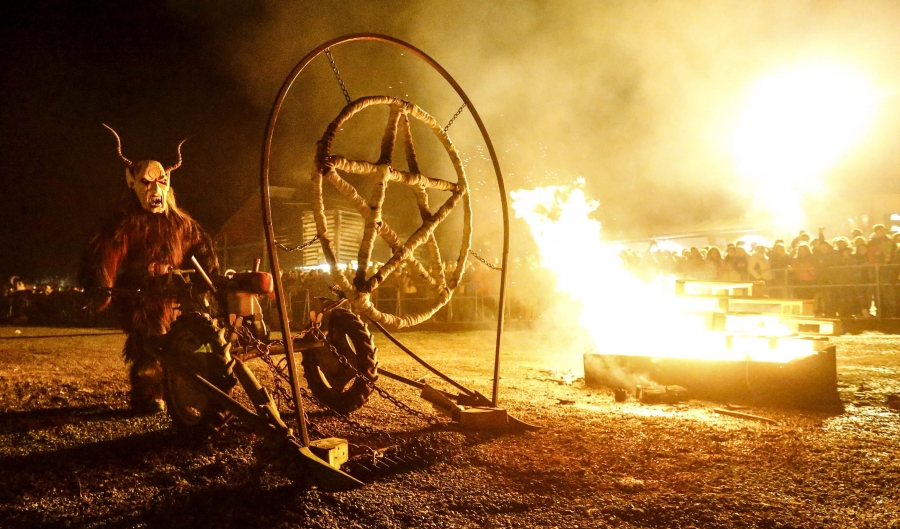 A man dressed in a traditional Perchten costume and mask performs during a Perchten festival in the western Austrian village of Kappl, Austria, on Nov. 13, 2015. Krampus used to come only once a year with St. Nicholas on Christmas eve, but now Krampus festivals span the holiday season.

Much later, as a result of Krampus' horns, people began to believe Krampus was pagan, and many still do. Berger believes the new wave of Krampus shows are trying to return the tradition to pagan roots, even though there are none.

“On one hand, the wish is to have a tradition that’s very old," he said. “And on the other side, there’s this extreme connection to the present day. The technology has been extremely upgraded, music plays a huge role, pyrotechnics and fire play a big role.”

Not everyone is a fan of the new Krampus. Peter Gröber, 60, used to play Krampus back when he only came once a year. Now, many of the Krampus shows start mid-November and don’t have anything to do with the saint.

“It’s not so interesting,” Gröber said. “The shows are with fire and smoke and it’s lot of tourism. I certainly don’t take part in any of it. It’s just a way to make money.”

Many, like Gröber, who remember an earlier Krampus, say even the more traditional Krampus runs are too modern. Krampus used to be scary, they say, but he’s lost his edge.

When it comes to Krampus’s future, Berger doesn’t believe this evolution is a threat.

“Customs, if they are alive, then they are always modern customs. Even when they’ve been around for 300 years,” he said. “They always conform to the wishes and needs of the people.”