Many Christmas traditions have pagan roots, like putting a winter tree inside your home. Lately, another ancient pre-Christmas tradition is being revived --- and it's a weird one. St. Nicholas has long rewarded kids who are nice, but did you know he had a counterpart? In medieval German and Eastern European folklore, Krampus the demon punished the naughty tykes. He's black, hairy, and horned like a goat-human hybrid with a long red tongue that curls like whip. The punishments Krampus doles out range from spanking kids to tossing them into a fire. 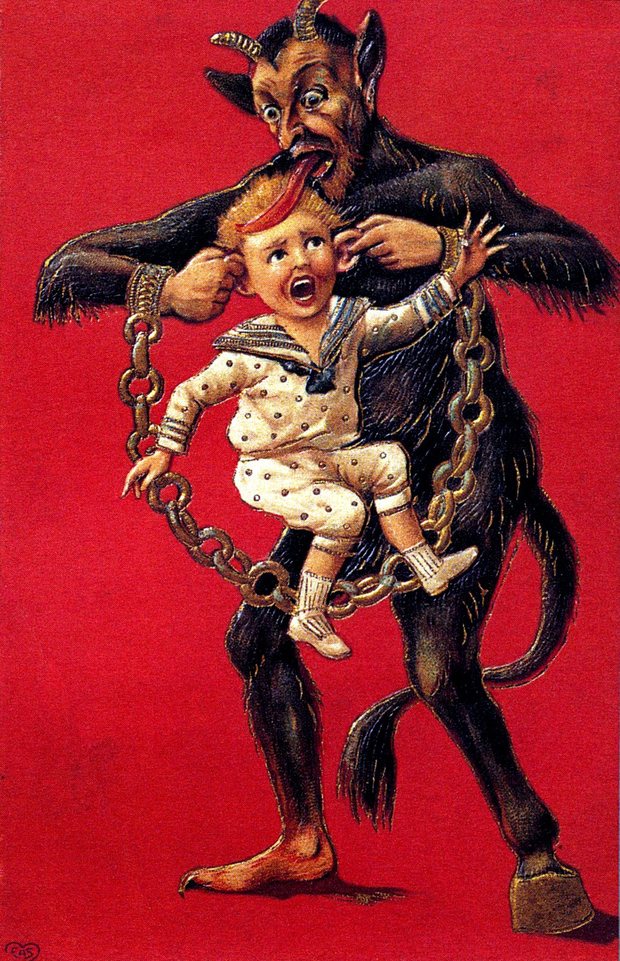 Over the last decade, Krampus parades have picked up across Europe, with revelers romping down the street dressed in demonic costumes.

Now he's crossed the Atlantic, and he's becoming Americanized like the rest of Christmas. KrampusFests are held inLos Angeles,Chicago, Dallas, Philadelphia and other cities. They sellKrampus baseball caps that say, "Have Yourself A Scary Little Krampus!" and Shepard Fairey-styleKrampus t-shirts that say "Abandon HOPE."

Last Christmas, Krampus became a cartoon character in an episode of the TV show American Dad, where it turned out Krampus was the good guy and Santa was the real villain. Bad-boy chef Anthony Bourdain commissioned a stop-motion animated short about Krampus a few years ago for the Christmas special of his show No Reservations. The Travel Channel wouldn't air the segment because they found it too disturbing: Krampus whips and dismembers the children.

The zeal with which some people are embracing Krampus could be a reaction against the saccharine Christmas nostalgia that overtakes us annually. But why stop with Krampus? There are so many other unusual Christmas traditions, like the crotchety Belsnickel who was beloved by Dwight on The Office, andTio de Nadal, the defecating Christmas log from Catalan folklore. No need to fear that they will displace Santa Claus: in the end, nostalgia will always trump irony.