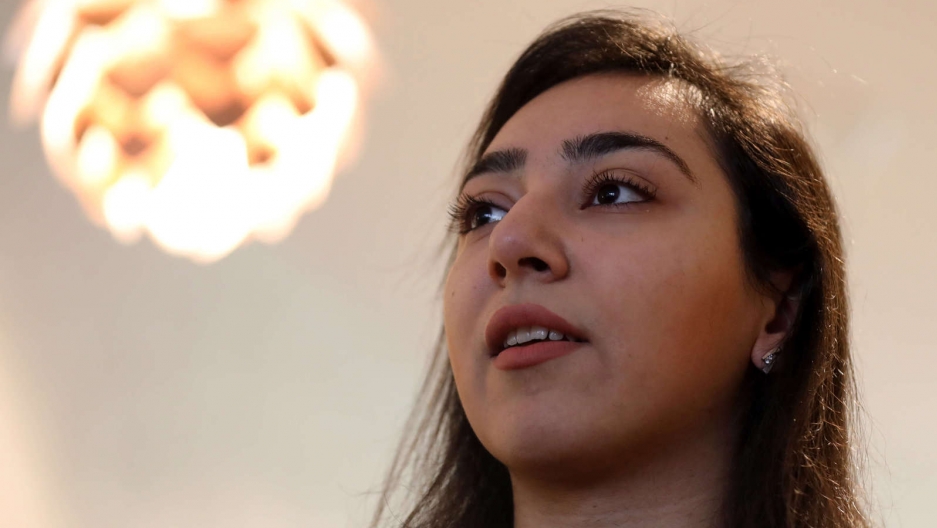 A Dutch church is holding non-stop services to block the deportation of the Tamrayzyan family from Armenia. Police may not enter houses of worship while ceremonies are taking place. Hayarpi Tamrazyan, the eldest daughter, is pictured at the protestant Bethel Church in The Hague, the Netherlands, Dec. 13, 2018.

Worshippers at a church in the Netherlands that have been holding round-the-clock prayer services for more than six weeks to prevent an Armenian family from being deported are hoping for a Christmas miracle.

Under Dutch law, police are barred from entering a place of worship while a ceremony is in progress. So hundreds of supporters from the Netherlands and abroad have held non-stop services at the Bethel church in The Hague to block the deportation of the Tamrazyan family.

They are "from all over the world, and that means a lot to our family. ...It gives us strength to keep going," said daughter Hayarpi, 21. "I really don't know what the outcome will be, but we hope we can stay here because this is our home."

The congregation hopes to convince Dutch authorities to make an exception to immigration rules on humanitarian grounds.

Related: A black church in Boston says it's called to be a sanctuary

"We will continue for as long as we believe it is necessary and possible," Bethel Minister Derk Stegeman said. "We hope at Christmas our minister will make a great gesture" and grant clemency to the family, he said.

The family came to the Netherlands in 2010 and say they cannot safely return home because they are considered dissidents by the Armenian authorities, although the nationalist Republican Party government that dominated Armenia since independence from the Soviet Union was toppled this year after peaceful protests.

The Netherlands took in hundreds of thousands of migrant workers in the 1960s and 1970s but now has one of the EU's toughest immigration policies. The conservative government under Prime Minister Mark Rutte says "economic" immigrants cannot stay, though refugees fleeing violence have a right to asylum.

Related: They took sanctuary in a Connecticut church — but did not hide from immigration officers

The Tamrazyans lived legally in the Netherlands for nine years while their asylum application made its way through the courts. But a final rejection came this year, and they have been refused an exemption under a program for minors living there for more than five years.

"They've been told numerous times they have to leave the Netherlands," the deputy minister for asylum and migration affairs, Mark Harbers, said on Dutch television last week. "This [vigil] seems pretty hopeless to me."

Hayarpi and her sister, 19-year-old Warduhi, have been studying at a Dutch university, while their younger brother, 15-year-old Seyran, plays on a local soccer team.

"My brother, sister and I grew up in the Netherlands," she told journalists. "All our friends are here, and my sister and I are studying here. This is just where we belong."