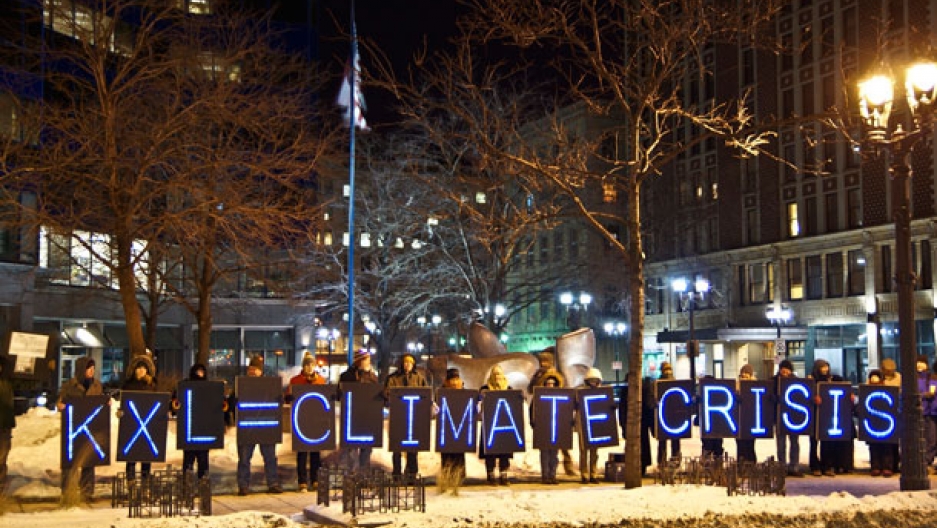 A group of Keystone XL pipeline protestors from 2014. A federal judge recently halted the project and ordered the Trump administration to conduct a more thorough review of its potential environmental impacts.

A  year and a half after President Donald Trump reversed an Obama administration decision to block TransCanada’s Keystone XL pipeline, a federal district judge in Montana has halted the project again, citing an insufficient review of the project's environmental impact.

“The Trump administration dismissed, with barely a paragraph in the decision document they issued, the whole idea that the pipeline would be contributing to climate change and the judge said that's not good enough,” Parenteau explains. “[He said], ‘You really do have to take into account the growing body of science that we all know and you have to explain why it makes sense, given that, to authorize yet another major piece of fossil fuel infrastructure that will take 40 years to pay off.’”

Morris is a former justice on the Montana Supreme Court and is considered a “very moderate judge,” Parenteau adds. “He’s hardly a radical environmentalist. There are some judges on the federal bench who are more pro-environment ..., but Judge Morris isn’t in that same category.”

The oil market has changed drastically since TransCanada first proposed Keystone XL, so, in some respects, Parenteau notes, the ruling could provide the company with a reason to put off the project or cancel it completely.

Related: The Keystone XL pipeline gets a victory, but with a question mark

“If it's true that the market for this oil has gotten really weak, you kind of wonder if maybe they aren't doing TransCanada a favor by giving them a chance to rethink whether it makes sense to continue with this, at least at this point in time,” Parenteau says. “It’s interesting that we haven't heard a huge outcry yet.”

During the pipeline's initial review process, the US State Department, which made the final decision on the pipeline, concluded that with oil prices so high, approval of the pipeline would not affect climate change one way or the other because the crude oil would have reached the market with or without it.

Now that oil prices have declined significantly and don’t seem to be rebounding, some oil marketers and economists believe that, without the pipeline, the heavy crude from Canada won’t reach the markets — which means that approval of the pipeline would now contribute to climate change.

Along with changing economics and the project's effect on climate change, the plaintiffs and the judge cited other issues, such as the risk of spills and damage to cultural resources.

“The Indigenous Rights Network is concerned because these pipelines run through a lot of what we call ‘Indian country,’ where native people have a large number of burial sites, archaeological resources and cultural resources,” Parenteau explains. “And, as with the Dakota Access Pipeline case, the tribes are insisting on greater respect, a higher level of security, and a higher level of maintenance and monitoring on these pipelines. … They’re pushing hard for much tighter regulation of the pipelines than we've seen, historically.”

A supplemental Environmental Impact Statement typically takes about a year, including time for public comment, Parenteau notes. If he had to make a guess, he would say that the project ultimately will not go forward.

“We've been dealing with this issue for eight years or more and it feels to me — and it’s just a feeling — that history is against this pipeline,” he says. “It feels to me like this is a turning point. We'll see.”