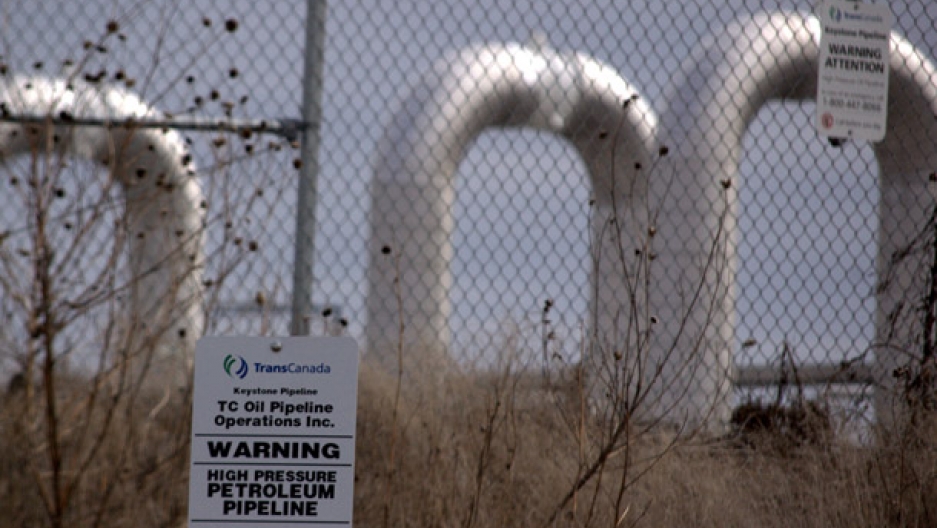 The first phase of the Keystone XL pipeline system recently leaked over 210,000 gallons of crude oil in South Dakota, a state that neighbors Nebraska.

The long-delayed TransCanada Keystone XL pipeline project has cleared one of its final hurdles. The Nebraska Public Service Commission recently approved the pipeline in a 3-2 vote. But the commission’s approval came with a potentially significant caveat: a new route for the pipeline that bypasses environmentally sensitive areas.

While the ruling has TransCanada claiming victory, the altered route gives pipeline opponents hope and possible cause to continue their fight and may put the economic feasibility of the project in jeopardy.

The Keystone XL pipeline will pipe carbon-heavy crude over a thousand miles from the tar sands of Canada to a junction with an existing pipeline in southern Nebraska. That pipeline goes to refineries in Texas.

The revised route of the pipeline would take a detour that avoids some of the more vulnerable areas of the Ogallala Aquifer and the Nebraska Sandhills. The commission’s decision came just days after 210,000 gallons of crude oil spilled from the original Keystone Pipeline, which is also owned by TransCanada.

The Keystone XL project has inspired fierce controversy since the project was proposed in 2008, especially regarding its environmental impact. When former President Barack Obama rejected TransCanada’s request to build on US soil in 2015, it seemed like the project had been shuttered once and for all. A newly inaugurated President Donald Trump seemed to bring it back from the dead with the stroke of a pen. But in Nebraska, a coalition of farmers, Native Americans and activists say even a permit from the president himself doesn’t guarantee the project will pass through their state.

“This decision today throws the entire project into a huge legal question mark,” says Jane Kleeb, the founder of Bold Nebraska, a social action group committed to halting construction of the pipeline. She explained at a post-decision rally that there are avenues for appeal. “The pipeline route that is now on the table for the state of Nebraska has never been reviewed by the feds. So, while I deeply appreciate the fact that TransCanada did not get their preferred route, it also opened up a huge victory for us in order to fight this now at the federal level.”

The decision keeps some landowners out of the pipeline’s path, but not all of them. Art Tanderup, a local landowner, choked with emotion when he spoke about the final decision.

“We’ve got this foreign corporation coming in and stealing our land,” he said. “We know it’s not over. We’re going to fight until the end, but how can our government give a foreign corporation the right to come in and take land from their citizens?”

TransCanada President Russ Girling said, “We will conduct a careful review of the Public Service Commission's ruling while assessing how the decision would impact the cost and schedule of the project.” The company is expected to decide before the year is out whether they’ll move forward with Keystone XL or not.