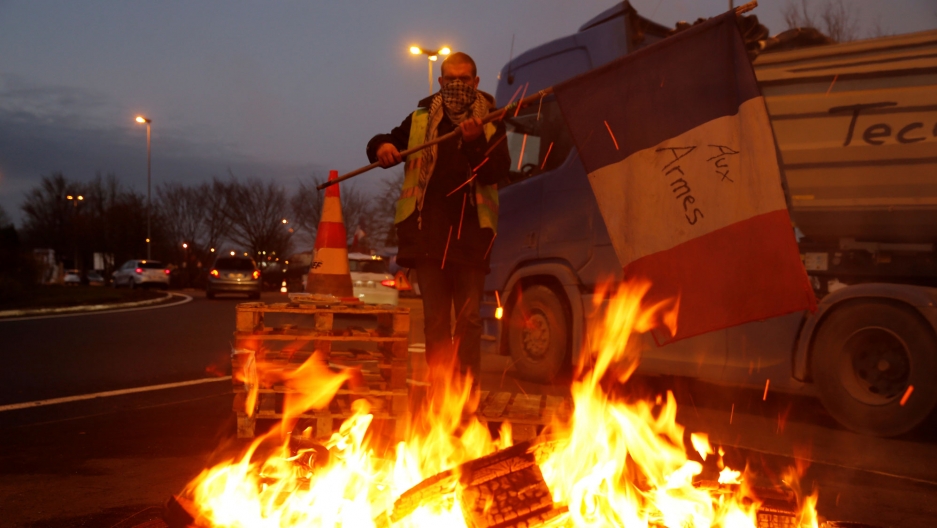 A protester wearing a yellow vest, the symbol of a French drivers' protest against higher diesel fuel prices, holds a flag near burning debris at the approach to the A2 Paris-Brussels highway, Dec. 4, 2018.

In announcing the decision, Prime Minister Edouard Philippe said anyone would have "to be deaf or blind" not to see or hear the anger on the streets over a policy that Macron has defended as critical to combating climate change.

"This anger, you'd have to be deaf or blind not to see it or hear it," Philippe said in an address.

"The French who have donned yellow vests want taxes to drop, and work to pay. That's also what we want. If I didn't manage to explain it, if the ruling majority didn't manage to convince the French, then something must change."

As well as a six-month delay in introducing the carbon-tax increases, Philippe said the period would be used to discuss other measures to help the working poor who rely on vehicles to get to work and go to the shops.

Earlier officials had hinted at possible increases to the minimum wage, but Philippe did not make any such commitment.

He warned citizens, however, that they could not expect better public services and to pay lower taxes, and that therefore compromises needed to be made on both sides.

The so-called "yellow vest" protest, which started on Nov. 17 as a social-media protest group named for the high-visibility jackets all motorists in France must have in their cars, has focused on denouncing a squeeze on household spending brought about by Macron's taxes on fuel.

However, over the past three weeks the protests have evolved into a wider, broadbrush anti-Macron uprising, with many criticizing the president for pursuing policies they say favor the rich and do nothing to help the poor, and some violent fringe groups calling for the president to go.