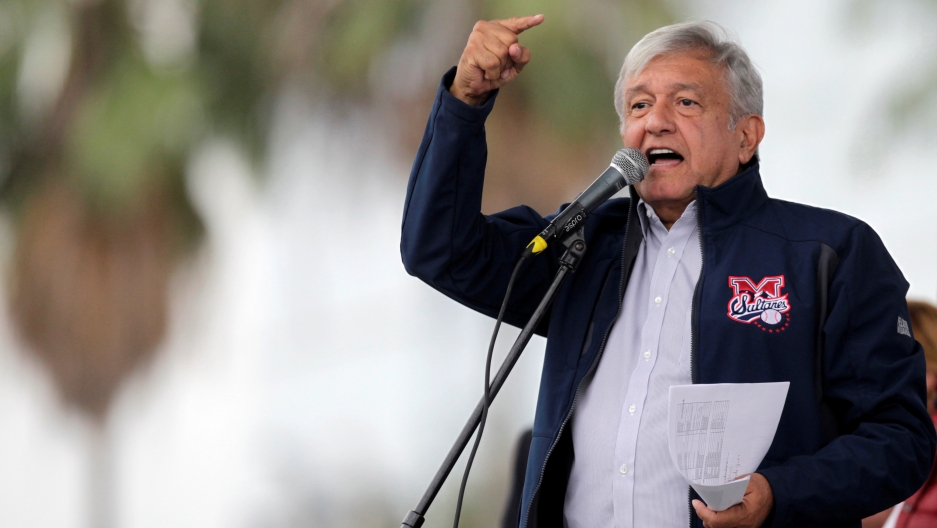 Mexico's President-elect Andrés Manuel López Obrador talks to supporters as he continues with his tour to thank supporters for his victory in the July 1 election in Monterrey, Mexico Oct. 19, 2018.

On Saturday, Mexico will get a new president: Andrés Manuel López Obrador. But the leftist leader won’t get a honeymoon period. He faces an immediate humanitarian and political crisis because of the thousands of Central American migrants who have arrived in Tijuana in recent weeks.

As a candidate, López Obrador promised to protect and support migrants. He also presented himself as someone who would stand up to US President Donald Trump. And he frequently criticized the American leader, calling him boastful, erratic and saying he would put Trump “in his place.”

The relationship of these two fiery leaders is being tested even sooner than expected, because of the thousands of migrants making their way to the US-Mexico border. And that’s provided a dose of reality, said Esteban Illades, a journalist and political analyst in Mexico.

“The migrant caravan is probably the starting point of the next Mexico-US relations. So definitely Lopez Obrador and his team are trying to balance different things in order to keep both Donald Trump and Mexicans happy without creating some sort of international crisis,” Illades said.

President Trump isn’t coming to Saturday’s inauguration. But his daughter Ivanka is. And on Sunday, Secretary of State Mike Pompeo will meet with his Mexican counterpart, Marcelo Ebrard, to discuss border security.

They have very different ideas about what that looks like. López Obrador wants the US to commit more economic aid to Central American countries to address the root causes of poverty and migration. Trump wants Mexico to fortify its southern border.

But the most pressing problem for both countries is the more than 6,000 migrants camped out in Tijuana, said Andrew Selee, president of the Migration Policy Institute.

“I think we really do have a loose cannon here with thousands of migrants in Tijuana in a single group waiting to cross. And it’s creating some really unpredictable situations for both Mexicans and US authorities,” he said.

Like on Sunday, when a peaceful march became chaotic after some migrants tried to cross into the US illegally and US Border Patrol agents fired tear gas into Mexico.

President Trump defended the border agents. He has also demanded that migrants who apply for asylum in the US remain in Mexico while their cases are decided — a process that routinely takes years. It would basically put Mexico on the frontlines of enforcing US immigration policy. The shocking thing is that López Obrador appears to be strongly considering the idea, Selee said.

“There was bewilderment on why an incoming administration was agreeing to something that seemed to be wholly in the benefit of the United States.”

Selee says one reason Lopez Obrador might consider such a deal would be if the US agrees to process asylum claims quicker. US Customs and Border Protection only accepts around 40 to 80 asylum seekers a day at the Tijuana-San Diego border crossing. There are close to 6,000 people on a waitlist, around half of the group. And for now, they’re stuck in Tijuana.

Many are staying at a sports complex turned shelter that turned into a muddy, flooded mess on Thursday night.

Many of those migrants are looking to López Obrador with hopeful eyes.

“We are hoping that [López Obrador] helps Mexicans and also people like us who want to work,” said José Luis Martínez, who’s from Honduras.

López Obrador has said he will give work visas to Central American migrants, although letting them all stay in Tijuana could spur major backlash.

Political analyst Rodolfo Soriano López says López Obrador has to balance another concern while negotiating with the US.

“Mexico can’t afford the luxury of a full closure of the Mexico-US border regardless of how miserable or unfair is that deal,” he said.

In the big picture, the migrant caravans are not as big an issue in Mexico as they are in the US — most Mexicans are focused on other issues, like violence and jobs. But sentiment is turning against the migrants. A recent poll in a major Mexican newspaper suggests that 49 percent of Mexicans believe migrants groups shouldn’t be allowed to cross the country, meaning López Obrador will be governing a country that is starting to look more like the US.