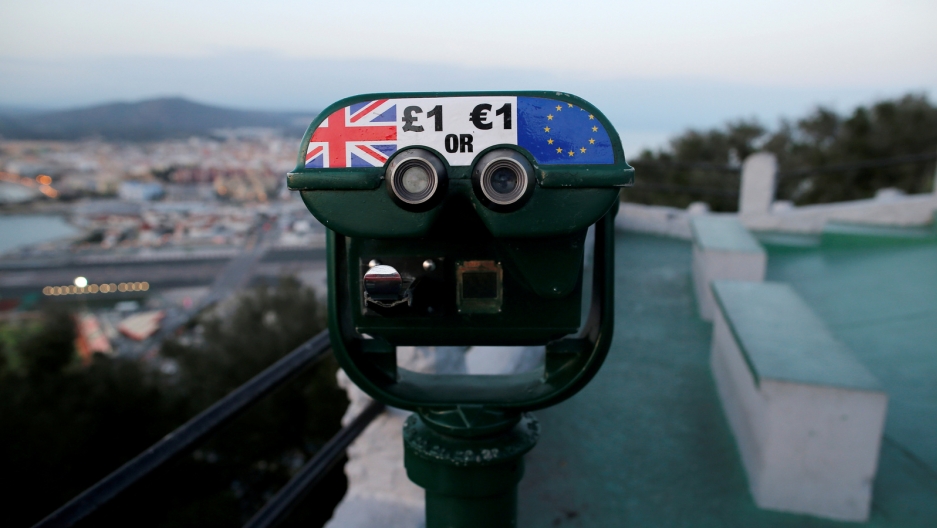 Tourist binoculars offer users the chance to pay in pounds or euros, on top of the Rock in the British overseas territory of Gibraltar, historically claimed by Spain, Nov. 15, 2018.

Spain's eleventh-hour objection over Gibraltar prevented the European Union on Friday from clearing the last hurdle before a leaders' summit on Sunday is due to endorse the Brexit deal with Britain.

A meeting in Brussels of national negotiators of the 27 EU states staying on together after Brexit ended with no agreement on Gibraltar after nearly three hours. "The work continues," one diplomatic source said.

Four months before Britain leaves the EU, the legal divorce treaty and an accompanying political declaration on future ties are due to be rubber-stamped by British Prime Minister Theresa May and the leaders of the 27 countries remaining in the EU.

May will arrive for more talks with the head of the EU's executive, Jean-Claude Juncker, in Brussels late on Saturday, just hours before the summit is due to start.

Her spokeswoman said in London May would work with the Spanish government on Gibraltar, a disputed British overseas territory.

Spain has asked for changes to Britain's legal withdrawal treaty and the accompanying political declaration to make clear any decisions about Gibraltar would only be taken with Madrid.

Prime Minister Pedro Sanchez said on Thursday Spain would be against the Brexit package on Sunday if it is not changed.

"After my conversation with Theresa May, our positions remain far away. My government will always defend the interests of Spain. If there are no changes, we will veto Brexit," he said.

Under EU rules, the withdrawal treaty is adopted by a majority and not unanimity, so a single state cannot block it. However, EU leaders want unity on this most politically sensitive matter.

"We've worked very hard and have in fact reached an agreement with Spanish colleagues in respect of Gibraltar's role in the withdrawal process," Gibraltar's Chief Minister Fabian Picardo said on Friday.

"If [the withdrawal agreement is] opened for one comma or one full-stop on Gibraltar, it's going to be re-opened on any of the other issues."

The Brexit accord faces vehement opposition in the British parliament, which must vote in favor for it to take effect. Otherwise, Britain risks leaving the bloc on March 29, 2019, without an agreement to mitigate economic disruption.

May's former Brexit minister Dominic Raab on Friday expected the House of Commons to vote it down.

Determined not to allow any redrafting of either of the two texts and risk derailing the process, EU states have instead proposed addressing Spain's concerns in a separate statement by the 27 leaders on Sunday that would not be part of negotiations with Britain.

Diplomatic sources said the 27 EU leaders' negotiators, or 'sherpas,' added to the statement more clauses on climate and expatriate rights to compliment lines on fisheries and industry rules already contained in a draft seen by Reuters.

The EU's 27 national negotiators are due to meet again on Saturday.

EU diplomats had hoped a text would be agreed by late Friday but fear Sanchez will want to discuss it at the top level on Sunday to show determination and score points with voters at home ahead of a December regional election.

Germany has said there can be no more technical negotiations at what is supposed to be a largely ceremonial summit and said Chancellor Angela Merkel could skip it if all the texts are not ready in advance.

Related: Brexit looms for more than 100,000 Brits living in Germany

The Brexit deal covers financial settlement, expatriates' rights and the Irish border, as well as setting a blueprint for future trade and security ties. It must also be backed by the European Parliament to come into force.