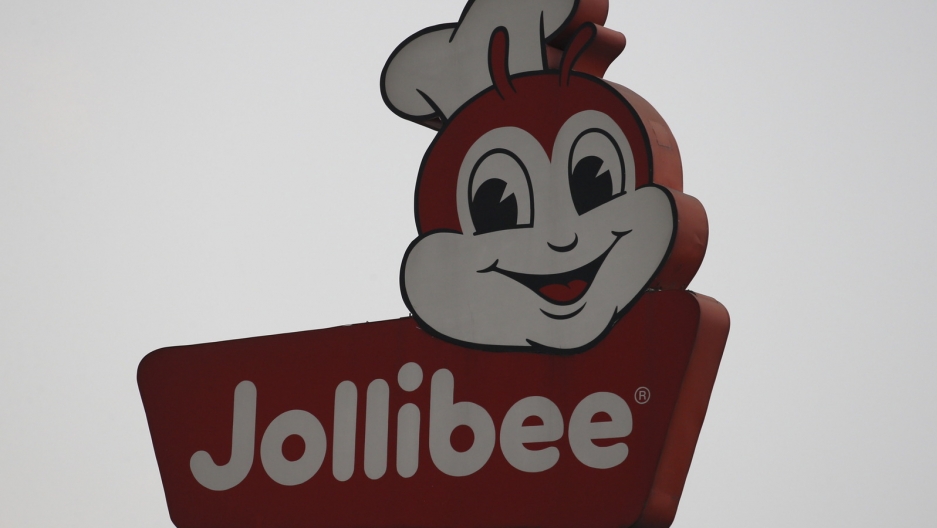 A logo of Jollibee company is pictured in Manila, Phillipines, Feb. 20, 2016.

On a rainy, cold Friday night with temperatures in the 40s, Rafael Soliven had been out on the sidewalk for two hours and had about 11 to go.

“So far, so cold,” he answered when asked how he was doing, “but I'm hoping the Chickenjoy is gonna warm my heart.”

Filipino fast-food chain Jollibee opened its first location in Manhattan on Oct. 27. Jollibee celebrated with some big offers: the first 40 in line would get a bucket a month of their signature fried chicken for one year. Jollibee was also offering an exclusive Funko Pop! collectible figure for the first 40 wearing bee costumes, after its signature mascot. Soliven made his costume with yellow duct tape and had the whole night to show it off.

Soliven was the 21st in line. He and fellow University of Connecticut student E.J. Jimenea jumped on the train Friday night when they saw Jollibee's post on social media signaling that the line had already started.

First in line were Justin Callan and Faye Javier, tech consultants from Brooklyn, who arrived at noon on Friday for the Saturday 8 a.m. opening. They’d researched other Jollibee openings and, noting the average wait, they got a hotel room so they could rest in shifts with weather gear and camping chairs to assist. The pair also had laptops and hotspots set up so they could work remotely. 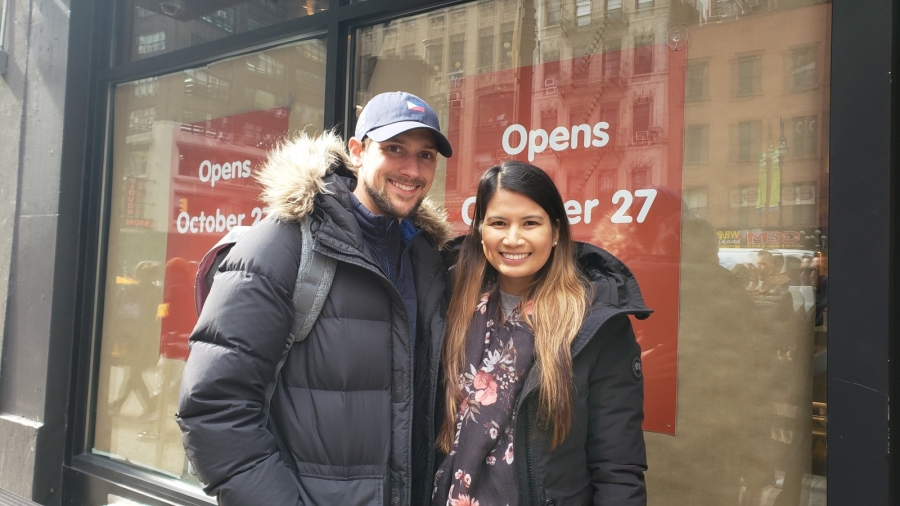 Justin Callan and Faye Javier were first in line and fully equipped to spend 20 hours on the sidewalk in the rain for a taste of Jollibee.

Jollibee first opened in the US in 1998 in Daly City, California. The company thrived — given the breadth of the Filipino diaspora — and now has more than 200 stores outside the Philippines. Some thought the devotion of homesick Filipinos was all it had going for it. In 2002, the Los Angeles Times reported the company's frustration with not reaching more non-Filipinos. Filipino blogger Marvin Gapultos commented last year that "Jollibee probably isn’t appealing enough to crossover to a non-Filipino clientele."

Yet, here Jollibee was — announcing over booming loudspeakers — “Good morning Manhattan!” The emcee thundered, “A Jolly morning to all!” After a bit of prompting, the crowd finally responded with the tagline: “Jolly morning!”

Jollibee had landed just off Times Square in Manhatten, opening a New York City-sized branch much smaller than most, including the first Jollibee location in Queens. It's a major play for the brand — aiming for the mainstream. On 8th Avenue and 40th Street, Jollibee's is a block down from Port Authority Bus Terminal and a five-minute walk from Penn Station, vying for commuters from New Jersey, Long Island and all over the country via Amtrak. It’s four blocks from where the Phantom of the Opera drops a chandelier on Broadway's global audiences. During the week, the streets fill with nearby Garment District workers needing a quick, cheap meal.

Related: Jollibee: A Taste of Home for Filipinos

Of course, this Jollibee still trades in Pinoy pride and nostalgia.

“I've been eating Jollibee since I was a kid. Jolly Spaghetti, Yum Burger, Burger Steak, you name it. It's part of my culture. I don't wanna let Filipinos down. The homeland, you know?” says Soliven, who grew up in the Philippines.

Most non-Filipinos at the opening had personal connections with the Filipino community. Javier, who has fond childhood memories of the Philippines, introduced her boyfriend Callan, a non-Filipino, to Jollibee.

“Growing up, I had braces and every time, [it was] my comfort food after getting my braces adjusted, when [I was] in pain,” Javier reminisced. “Next to my dentist [was] a Jollibee so I would always go there with french fries and a sundae and dip the french fries in the sundae, [it'd] make me feel better.”

Some Filipino Americans first got to know Jollibee in the US, like 15-year-old Anna Nicole Dagdagan from Staten Island, who says Jollibee connects her to her roots.

“My parents, they definitely wanted me to be able to fit in with Americans, but at the same time they wanted me to express my culture,” Dagdagan said. “For teens growing up here, that's one thing we try to bond over. And because Jollibee is for everyone, we're able to all fit in some way.” 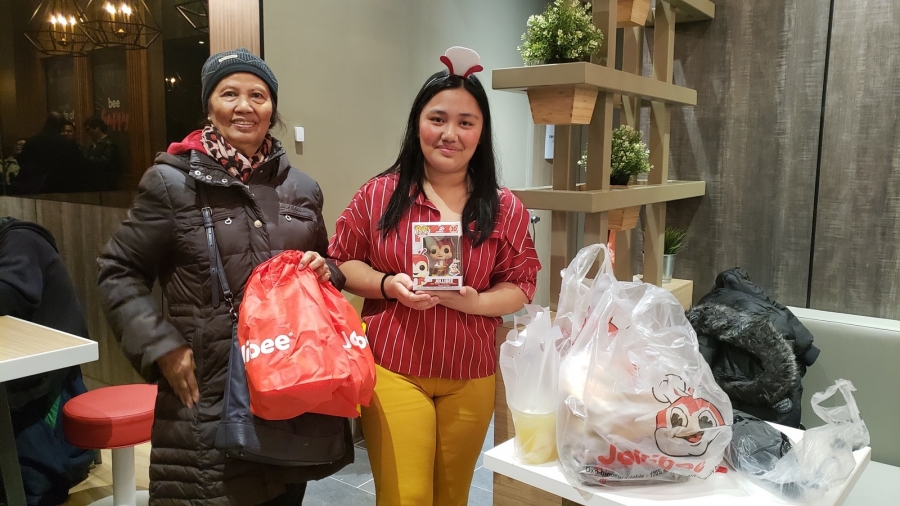 Jollibee wants more than Filipino loyalty, though. Callan, who sounded the alarm to line up as the informal Italian-Irish American poster boy, pleased Jollibee's marketing team. By mid-morning, he had his lines down as he greeted reporters: “Jolly morning!" or "Magandang umaga. Magandang umaga po!" in Tagalog.

Along with Filipinos, Filipino Americans and the Filipino-connected, non-Filipinos like Matthew Sterner also showed up for the Jollibee opening. The third person in line, he may have been the most passionate person there. All night on Friday, Sterner hyped the crowd and tried to attract passersby on board.

He discovered Jollibee on his own in Jacksonville, Florida. “Walked in one day, tried it out, and then every day since then, I'd just stop there on my way home," Sterner said. He's just the customer this Jollibee location needs.

“Most of the stores we have right now are focused on the Filipino areas. And this is really one of our efforts to try to find out — moving into the mixed market — and really going beyond,” said Jose Miñana, Jollibee Foods Corporation’s group president for North America. “In California, it's still about 80 percent Filipinos. In other areas, like Chicago and Florida, it's about 65-70 percent Filipinos ... but I think here in Manhattan it's going to be a lot more for the non-Filipinos."

For now, the menu is tailored strategically.

“It's just really focused more on our chicken,” Miñana said. The Chickenjoy is Jollibee’s take on classic breaded fried chicken. "Then we have our Jolly Spaghetti and then our Peach Mango Pie. All three very distinct, unique products," he says. Miñana places his bet on the Peach Mango Pie as a big hit. “These are Philippine mangoes. You can't get better mangoes in the world outside of the Philippines.“ Jollibee Spaghetti features a slightly sweet red sauce with diced ham and hotdogs — a confusing combo for newcomers.

Paolo Española, a food entrepreneur, blogger and podcaster, responds to those who might resist this spaghetti version.

“To the reaction ‘I can't get over this spaghetti’ — don't think of it as spaghetti then,” he advised. The spaghetti confusion mirrors the misunderstanding that Filipinos still experience in the US — being familiar, yet not. The Philippines’ intertwined history with America has produced unique culinary differences that may surprise some eaters.

“They're like, 'what are they?’” mimics Española. “'You look Asian, but your name is Española' ... I think this is actually an advantage ... the fact that we feel so familiar to many other cultures, [yet]at the same time foreign ... I don't see [it] as a bad thing at all that [our culture] is hard to categorize. Because the act of categorization — you're immediately drawing a boundary.”

Española finds that food is great for blurring boundaries. Born and raised in Saudi Arabia among other Filipinos families, his mom is of Chinese descent. He went to high school and college in the US Midwest and now lives in New York. 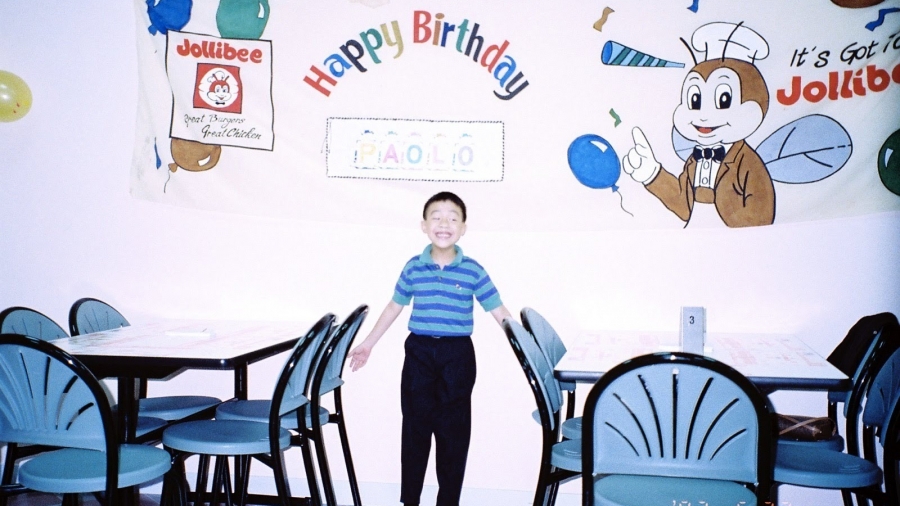 Food blogger and podcaster Paolo Española celebrated his 7th birthday at a Jollibee in Saudi Arabia.

Española uses food as a common language to transcend labels. He considers the cultural confusion some might experience at Jollibee’s as an opening for conversation.

“When I see something that's very unexpected in another person's cuisine, I'm like ‘how did that get there?’” and that opens an exploration of the historical influences behind the food — I think it presents an opportunity that [Jollibee] is opening in Manhattan — to open up that conversation ... If the conversation doesn't go right and people just see [Jollibee] as another fried chicken spot ... it's a lost opportunity.”

Related: No shame in sisig: Filipino chefs and scholars say they are overcoming a century of stereotypes

Tourists seeking a bite before a matinee will probably ponder food options on 8th Avenue. When they see the cheery red bee mascot, smell the fried chicken, they may think "We're in New York, let's try something new!” and walk right past an Arby's into Jollibee. It could be just another fast-food experience — or maybe the spaghetti will encourage mainstream American eaters to think deeper about the cultural food ties that bind us.

Anything can happen in New York.